iDetective | DC Comics on the iPad 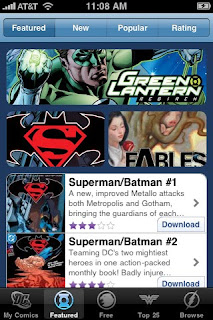 DC Comics has finally slipped their toe into the sea of digital comics with an iPad app through Comixology.
We should say here and now that the DC app functions pretty much the same way the Marvel and Boom! apps function. If you have an iPad or are getting one soon then you may all ready know that the Comixology app works by allowing you to read the comic in a couple of ways: full page, dragging your finger across the screen, or "guided" where the app it self takes you from panel to panel as it's been programed to do.
The app also features a slick, easy to navigate, branded store front.
If you don't have an iPad or don't really want one you can access the Comixology comics
on line here: DC Comics on Comixology
"While still not as nice as some of the more vetted comic book reader applications, it has the advantage of storing your comics *in the cloud* as they kids say so you can read them from anywhere." - JIM

Both Jim and I have taken the DC Comics app for a spin and present our thoughts to you now:


JIM - My first impression? The DC Comixology App has a nice assortment of comics overall. The only place I find it lacking is with older stuff - Sandman seems to be the oldest, it would have been nice to see some Bronze Age or Silver Age stuff. By way of contrast, the Marvel app currently has quite a number of Silver Age Marvels and just this week launched the first four Bronze Age Invaders comics (one of my favorite series!).

CAINE - My first impression? DC missed the boat if you ask me. While the app is filled with Batman, Superman, and current popular titles there is little there in the way of an introduction to the DCU to the over 2M new iPad owners/ positional new readers.

JIM - I think the app may have gotten rushed out the door because it seems that DC felt the need to make the fourth and fifth issue of Brightest Day, Generation Lost (which I’m reading and loving via ComiXology) returnable for retailers. I think that was a good plan to keep the peace with retailers but when you compare it to the amount of advance warning Marvel gave retailers with their Iron Man Day and Date release, it seems awkward. I suspect this is in part to some of the ongoing negotiations concerning creator's royalties that Jim Lee has mentioned. It would seem that that stuff wasn't hammered out ahead of time suggesting the timetable on this app may have gotten advanced.

CAINE - I would have liked to have seen the app launch with more Secret Files & Origins (so far there are only origins for Batman & Green Lantern). Some Who's Who (which could double as iPad desktop imagery as they are largely pin ups with text boxes), & a few dozen number 1 issues (maybe bundled together 3 at a time for .99).

JIM - While some of the "Browse by:_______" cross referencing had me a little confused I was happy to see Tiny Titans - Haigen will like that. It was also cool to see so many Vertigo titles present. This is really where DC can shine over Marvel, who don’t have anything to really compare to the type of outré fare that Vertigo gives DC. Currently, they have Sandman, Fables and The Unwritten.

CAINE - I was glad to see Wildstorm titles; such as Wildcats, Gen 13, Planetary, & more. I would have been glad for the opportunity to purchase canceled books (particularly those with issues that didn't see print), or imprint books like Milestone or Impact (Red Circle recently)  what about all the co-features? Why not give them their own package on the iPad? 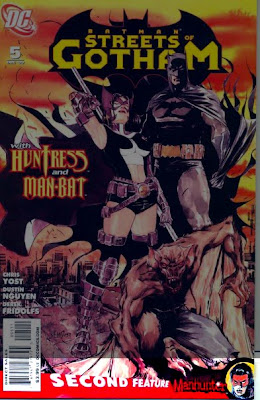 JIM - Yeah, some of those co-features would be great to see here! It was disheartening to see that there is only one title staring a female character, Mirror’s Edge. What I would like to see: some classic Brave and the Bold, World's Finest, or Metal Men in the app! 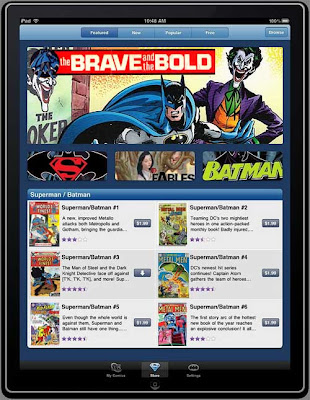 CAINE - I would have liked to have seen some more Zuda comics in the app, they seem like they would be made for it. Only Bayou is currently in the app, High Moon would have been a major seller.

JIM - Perhaps that's coming later? I wonder if other completed Zuda comics will show up in this format. For that matter, is this why Zuda was put on hiatus? So that DC could refine the contracts for those web comics? Or has a de facto judgment been passed on Zuda via the iPad?

CAINE - Now that both Marvel and DC have apps through the same company I want to see them re-release the Amalgam titles and see if there is an audience for more. If Dick Grayson is destined to stay in the Bat suit for the foreseeable future then please give me MoonWing...

Has anyone (but me) read the Flashback Universe web comics on their iPad? If so we'd love to know what you think about them or any other digital comic in the comments field below.