So I woke up this morning to find this in my gmail inbox: 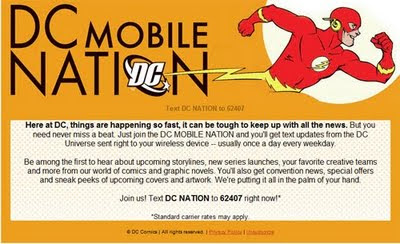 Here's what the text says:

Here at DC, things are happening so fast, it can be tough to keep up with all the news. But you need never miss a beat. Just join the DC MOBILE NATION and you'll get text updates from the DC Universe sent right to your wireless device -- usually once a day every weekday.

Be among the first to hear about upcoming storylines, new series launches, your favorite creative teams and more from our world of comics and graphic novels. You'll also get convention news, special offers and sneak peeks of upcoming covers and artwork. We're putting it all in the palm of your hand.

Now while the idea of having a direct line to Dan Didio so I can call him up and congratulate him every time DC thinks of a new way to eviscerate some cherished icon from my childhood is indeed enticing, I'm a little underwhelmed by this mass spam approach.

It strikes me as a one of those things marketing people do when they have no freaking idea what they should be doing. Like they ran out of people on the staff to get twittering/blogging but they have been commanded to use Transmedia (hey, remember when it was called New Media?) to promote brand synergy or some such nonsense.

I've been asked by several people to give my opinion on the short term/long term effects of the changes in the industry over the past two weeks, but I think a lot of people have covered the the short game pretty well. The long game is harder to call. 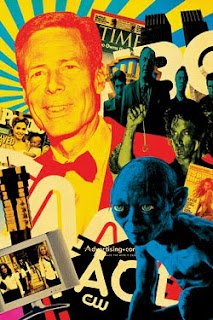 I will say this - BusinessWeek (and me as well) correctly surmised that the Disney/Marvel Deal was going to put heat on Time Warner to get on the stick and do something dramatic soon. BusinessWeek in a recent article with Jeff Bewkes, CEO of Time Warner, predicted TW might go buy some company to add to its content library. BW was predicting a MGM purchase among other things.

I, on the other hand, was thinking TW would find some way to revitalize DC in the eyes of Wall Street. Right now, despite the success of Dark Knight, DC Comics is getting about as much attention from Wall Street as, well, Cosmopolitan. Like Time Warner Cable, most of the business practices going at DC Comics are legacies from over 30 years ago. It's hard to make cable tv and comic books seem as sexy as anything involving the internet.

So we find out this week that the timetable for Diane Nelson's ascension to DC has been advanced by about 6 months which I'm is meant to get lots of good press for Time Warner, and it may initially. However, it'll take more than a mobile hotline to combat the rapid fire advancements Marvel has been making along the digital scene.

What does all this mean for comics?

Well, in the long term it could mean that both Marvel Comics and DC Comics become licensed published properties like the current stable of Disney comics being published by Boom! Entertainment.

If I was Disney, I'd *spin off* the publishing side of Marvel Comics (because, let's face it, printing on paper can ONLY get more expensive in the long run, right?) then license out the characters to this newly spun off company for as long as that company was able to make money off of any print products. I mean the footprint on a high selling Marvel comic is at the most, what? 100K? If you are Disney, do you really want to be involved in any endeavor that's trying to satisfy such a paltry number of consumers?

Remember, we know Disney bought Crossgen several years ago, and what have they done with those licenses? Well, I remember some company that was repackaging the Sojourn stories but damn if I can find a link now. Other than that, all that stuff is just sitting on a shelf isn't it?

There are a lot of good things that could come out of these new deals for both companies, so don't leave here today thinking I'm just seeing the glass half empty. For a fan of digital comics, the future for both companies couldn't be brighter now! :)

Also, hopefully, we will finally see an end to all those 6 issue Movie Proposals masquerading as Comic Mini-series! :D

Lets hope that at the end of all this deals between companies the comic fans wont be the losers.

In the immortal words of General Anthony McAuliffe: "Nuts!"

Like so many corporate decisions made by expensive suits sitting at an expensive table, it's founded on a logic more bizarre than some over-sized talking mouse keeping a dog as a house pet.

Sound too pessimistic? Consider the fact Marvel Comics has not introduced a dynamic new character for almost two decades. Like DComics, their output for the new century involves reconstituting old faces in old costumes. And the track record for translating the Marvel universe to other media (games, animation, feature films) has been spotty. Anyone else care to jump in and make another Fantastic Four cartoon show or a tv-movie about the New Mutants?

After their awkward and messy wrangling with Pixar (which they ultimately acquired), I had hoped Disney would learn that positive results depend more on the people you hire than the properties you buy. Pixar's excursion into superheroics, 'The Incredibles', did just fine without any exhaustive exercise in copyright licensing.

Must be the standard gag reflex of American conglomerates: If you can't cough up a new idea, go buy some predigested one… and pay top dollar for it.

The regrettable Marvel Comics tv-movie I was thinking of was 'Generation X', not 'The New Mutants'.

I should have consulted my 1,508 page X-Men Alamanac.

But I'm reasonably confident about my head count for the Fantastic Four.

@Ask a Doctor - I think we'll see changes we like and changes we don't like which is just natural as one company influences another. As fans, we can hopefully see a lot more collected editions of awesome old comics!

@Fools Gold Comics - You've got a good point about the Next Generation movie (which I had forgotten about!) - What I would like to see is a Fantastic Four cartoon told with the love and care as some of the best DC Animation projects. Like a New Frontier version of the first Galactus arc in the FF. - On the flipside, that story has been told twice already in cartoons, maybe something completely different would be better.