I've often heard comic fans wax nostalgic over the old GI Joe comic book series (probably because it was pretty good and there was a long running cartoon with all the characters) but I've never heard anyone mention the action figure comic that I best remember from my childhood: Big Jim's P.A.C.K! 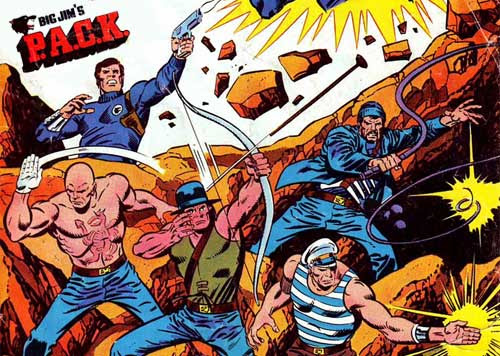 For those of you not familiar with Big Jim, he was Mattel's answer to G.I. Joe. He had a kung fu grip and a button in his back that enabled you to make his arm chop through all sorts of stuff. There are some good sites devoted to the toys, [ big-jim.eu ]

The PACK was Mattel's second attempt to give the Big Jim toyline a profit making entourage, the first one appearing in 1972 was a rather generic ensemble of teammates all copying the Big name theme(Big Jeff, Big Josh, Big Jack.)

The first line up must've been a bit of a failure (or perhaps the similar sounding names just proved confusing to toy hunting parents) as Mattel quickly produced a revised team featuring much more colorful characters in 1976 with box artwork provided by Jack Kirby. 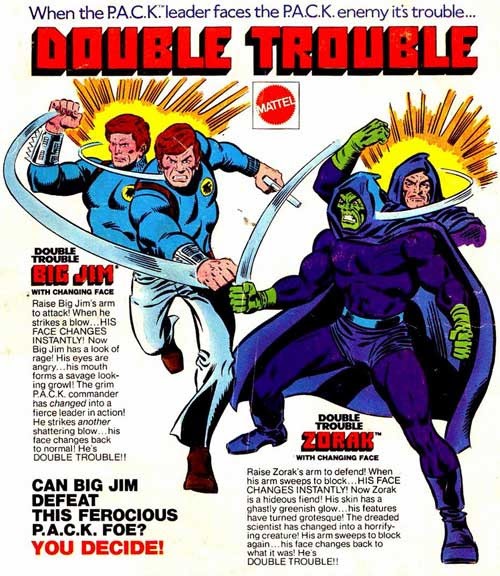 Marvel was also contracted to produce an introductory comic book of all the characters which was superbly drawn by John Buscema. 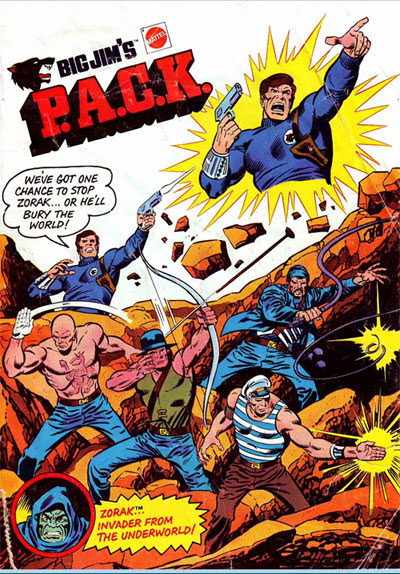 In issue one we are first introduced to each of of the PACK team members (and I'll get to what PACK stands for in a second...)

First up is: Dr. Steel 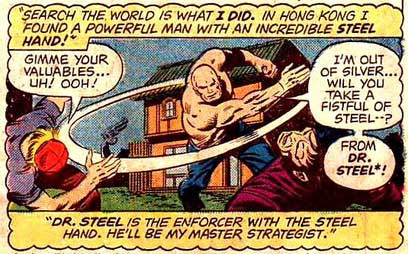 I guess he's a Doctor in Running Around With Your Shirt Offology.

Next up: The Whip 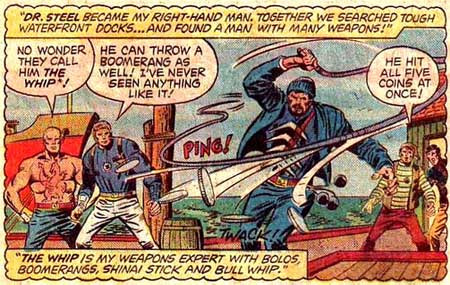 The hunter/tracker of the group is Warpath. 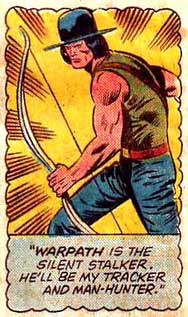 The group is completed with the presence of the bionically armed Torpedo.

With this rugged team of adventures assembled, Big Jim christens them The PACK which stands for Professional Agents/Crime Killers. 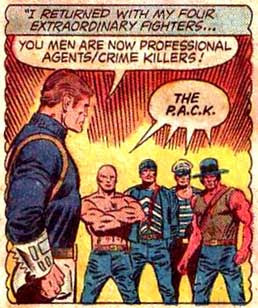 I'm not really certain how to parse Crime Killers, but it doesn't sound like this group is going to be reading a lot of Miranda Rights during their exploits.

Each member is given a hand tattoo and stamped shoes for easy tracking.

That probably makes working in the shadowy world of international espionage a bit challenging, but HR believes it encourages team building, so what are you going to do?

Once assembled, the government contacts the PACK to bring down a dangerous adversary: Zorak. No relation to GI Joe's Zartan, though the names do seem similar. (Fun fact: Zartan was an anagram of Tarzan created by comics writer Larry Hama.) Nor is he any relation to the same named character from Space Ghost, though they are both green. 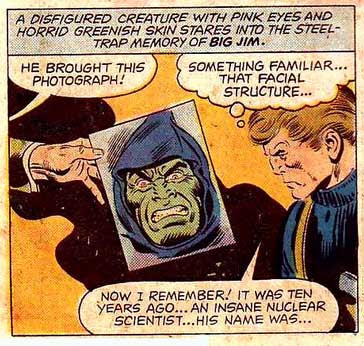 To handle this assignment, the PACK are all given cool weapons and outfits from the government; like Big Jim who gets a awesome car. 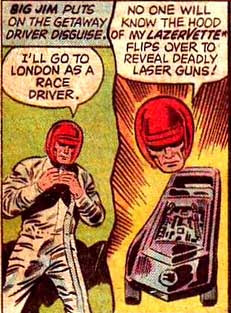 Or The Torpedo gets Secret Agent gear. 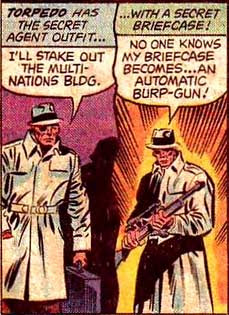 So I bet you are expecting Warpath will get some sort of cool exploding arrows or zip line and cross bow set up, right? Think again. 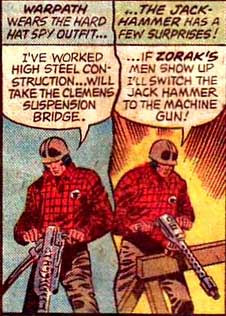 I appreciate that they tried to give Warpath a bit of backstory by saying he's worked construction before, but they probably could've taken another run at this idea before stamping it Ready To Go.

Anyway, as the mission continues, each member of the PACK gets a chance to demonstrate that they are as smart as they are bold. 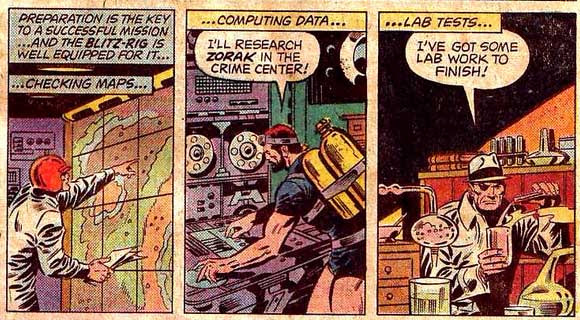 Again, Warpath gets shafted. (see what I did there?) 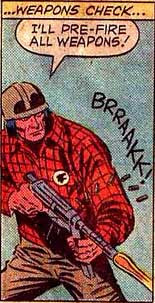 So everyone is geared up and proceeds with the mission. The first to encounter the forces of Zorak is Big Jim.

Now, maybe this is just me, but if your Team Leader is limited to two expressions: Grim and Angry, then you sort of have to question his planning ability, don't you? Shouldn't Happy, Satisfied or at least Surprisingly Relieved be options? I mean how would you feel if at the end of a successful mission the best face your boss rewarded you with was Grim? You'd sort of wonder what the heck he wasn't telling you.

After some covert reconaissance by each team member, Zorak's master plan is revealed and the team springs into action and takes his operatives down in true Big Jim fashion. 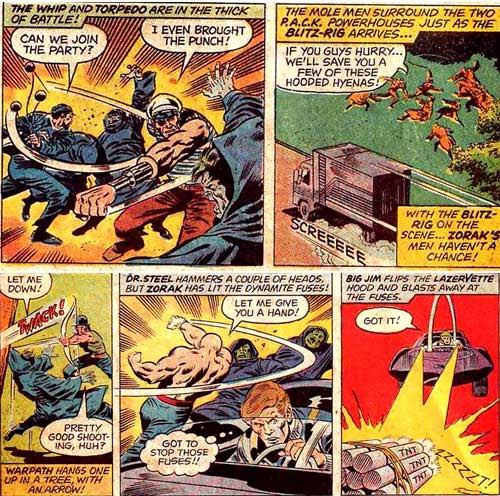 Unfortunately, Zorak gets away: 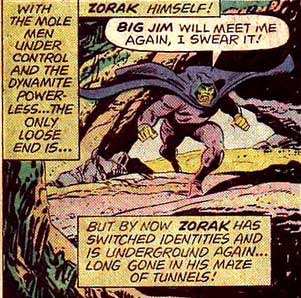 Thus giving Big Jim a good opportunity to use one of the only two expressions he can muster at the end of a mission. 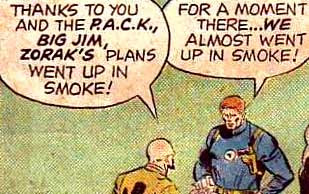 One of the other PACK members might want to privately speake to Big Jim about how you sell success. Telling mission command you almost lost the whole team isn't the sort of thing that looks good on your year end performance review.

Well, maybe Big Jim will learn a lesson from this adventure about the dangers of blindly jumping onto an assignment without proper examination of the mission parameters and objectives... 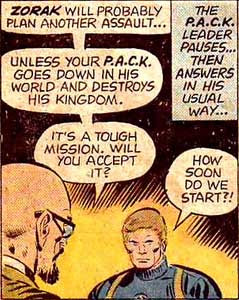 I see another grim faced mission conclusion on the horizon.

Hope they rest of you have a week that's Big!

Ah, yeah! I remember these guys mainly from ads in Bronze Age comics I read probably about a decade later, but it always seemed like a cool toyline.

I was a "Super Joe Commander" kid, myself.

Thanks for the old memories...