Revisiting the Wild Wild West: The Night of the Grand Emir 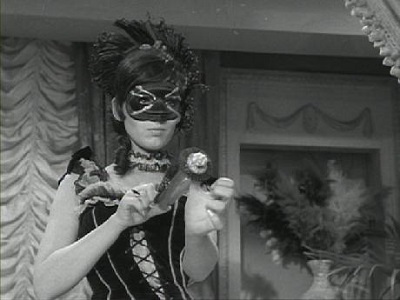 "The Night of the Grand Emir"
Written by Donn Mullally
Directed by Irving J. Moore
Synopsis (from IMDB): Jim and Artie try to protect the Grand Emir of the Ottoman Empire from members of an assassin's club who have set their sights on his murder.

Jim: This episode wasn’t originally on our list, but you mentioning it had Yvonne (Batgirl) Craig in it was all it took for me to agree we should review it.
Trey: And in it she is! As a dancing girl and would-be assassin with the pretty Bondian name of Ecstasy La Joie.
Jim: Craig was a ballet dancer before going into acting. This episode makes use of Craig’s years of dance training--a lot. She's got like three dance numbers in this episode: can-can,  flamenco, what they call Egyptian dancing.
Trey: And at least twice, there's a hidden weapon involved: an exploding garter and a razor-edged tambourine. She never actually kills anybody, though.
Dance numbers aside, I feel like this episode has a lot of things going for it. In fact, it forces me sort of re-examine my premise that Wild Wild West is best when it's weirder. This is a fairly straight forward "Bond type" episode, and it's better than the last two, I think.
Jim: True. It is again not very Western, though.
Trey: No it isn't. More straight Victorian, though the international politics of an Ottoman (leaving aside I don't believe the Ottoman Empire used that title in this era) Emir's visit and Turkish dissidents in the U.S. in large numbers is likely straight up ahistorical. While I'm on historical stuff, dialogue at the end of the episode dates it as being something more than 12 years after 1860. Since the entire series is during Grant's presidency, it must take place between 1873 and 1877. However, the villains' plot involves the building of the Suez Canal, which was completed in 1869. In our history.
Jim: The one without miniaturized spy gadgets! 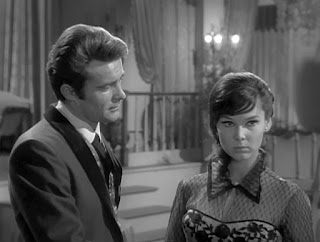 Trey: True. But like I say, this episode has a lot going for it. The almost immediate bait-and-switch of the sinister Dr. Bey appearing to be the villain, but turning out to only be a pawn of the Assassins' Club.
Jim: Then there's Richard Jaeckel's Cable who does the deed not being the main villain, but instead being just a flunky...
Trey: And finally, the annoying society columnist T. Wiggett Jones (Don Francks) winds up being the badass head of the Assassin's Club.
Jim: In a twist that was not surprising, he dies in a one on one fight with West, and accidentally stepping into his own death trap!
Trey: There were a lot of fights this episode. West party crashes the Assassin mansion singlehandedly.
Jim: Yes, this episode probably gives us the most actual fight scenes we've seen in an episode so far. My favorite is the one between West and the assassins on the staircase.
Trey: All an attempt to recruit him, apparently. Of course, it doesn't work out, and equally of course, there back up plan of just killing him is foiled by Ecstasy La Joie falling for him and getting him out of the death trap.
Jim: Some things never change in the Wild Wild West.
Posted by Trey at 7:00 AM