Revisiting the Wild Wild West: Night of the Steel Assassin 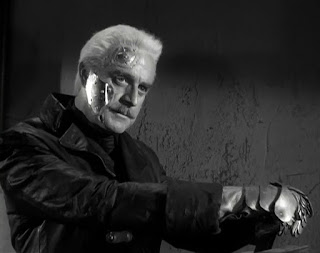 "The Night of the Steel Assassin"
Written by Calvin Clements and Steve Fisher
Directed by Lee Katzin
Synopsis (from IMDB): Jim and Arte must stop Torres - a man more metal than flesh, with superhuman strength, the power of hypnosis, and a taste for revenge - from killing President Grant.

Jim: This episode starts off with yet another moody night time dock setting. There is something about such locations that enhances the intrigue of the show in a way that the Western locales do not.
Trey: They do love those. It makes me wonder if they regretted not explicitly making their base of operations in San Francisco like the WWW adjacent, if not inspired, tv shows Barbary Coast (1975) and Brisco County, Jr. (1993).
Jim: We jump right into an action scene as our Victorian cyborg villain Torres (John Dehner, a frequent tv villain) smashes his way into a local shop with an iron fist! The shop owner defends himself with a harpoon, but it proves useless against this armor-plated killer.
It’s more than just a little coincidental that Jim West is walking by the shop when the attack takes place. Did I miss a bit of dialogue later that might explain this fortuitous timing?
Regardless, West finds himself unable to stop Torres; even bullets proved useless! We are left with Jim facing certain strangulation as a cliffhanger before we jump into the title sequence. When we return, Jim uses a smoke bomb to escape. A bit of an anticlimactic resolution, but it unfortunately sets the tone for the rest of the episode.
Trey: Yes, this episode has a problem with before cut cliffhangers that amount to not much. I do like seeing West use a gadget, though.
Jim: In several instances, the episode brushes over some moments of tension with a wave of the hand. Chief among them is Artie supposedly being hypnotized, which the next seen immediately deflates. I also think Artie’s fall into a watery doom later in the episode is glossed over. He says he just swam out into a river, but the explanation comes late in the episode.
Trey: Don't forget the bit where the carriage driver leaps at West with a knife, and we go the break. When we're back, West just shoots him with no struggle.
Jim: I also felt a physical confrontation with West and Torres never quite played out like I wanted it to.
Trey: Yeah. I realize they wanted to establish Torres as superhuman, but then that's just a situation where Jim should fight smart. 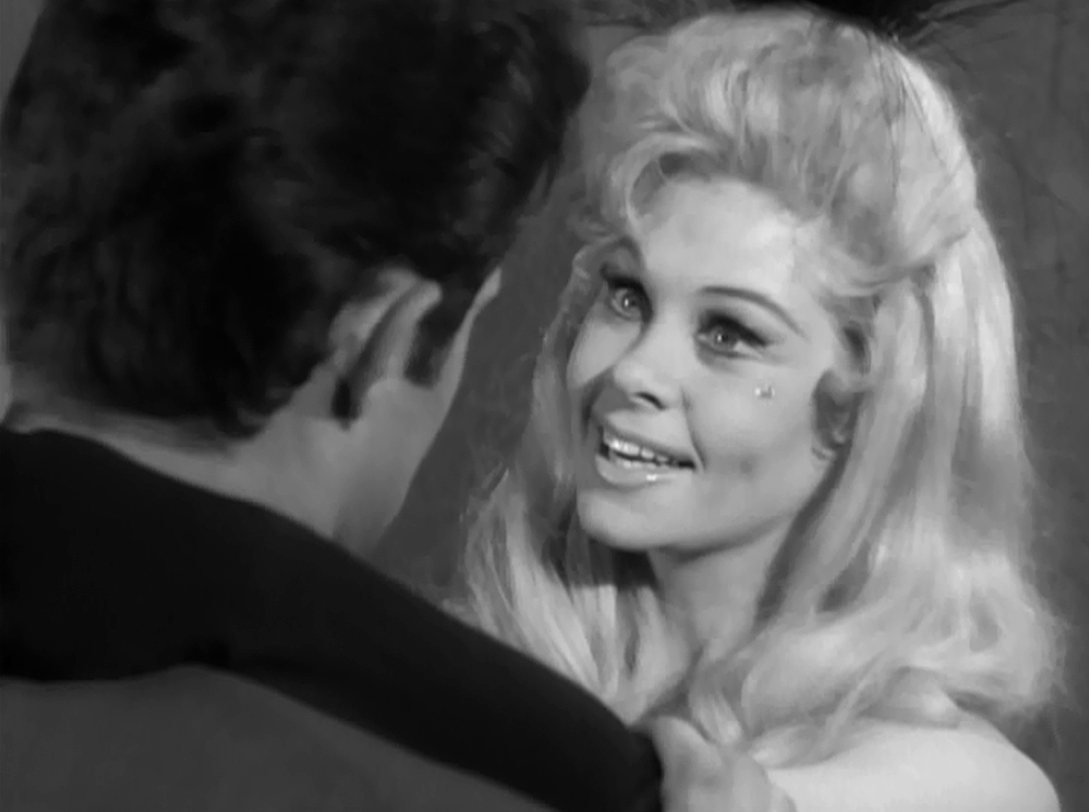 Jim: Speaking of smart, this episode doesn't seem to think much of educated women. After meeting the independent thinking Nina Gilbert, Artemus says, “There should be a law against educating women.”
Later, Torres uses a spinning lamp to hypnotize her. He wants to make her less serious and more childlike, because he suggests she does too much thinking.
Trey: If it were just Torres you could blame it on his villainy, but Artie too? It's odd, because she's not played as educated but clueless, really. She's quite capable in that she figures the connection and tracks down Torres, though maybe she's a bit clueless in not seeing the potential danger. Still, the episode is invested in treating her as a figure of comedy much more so than the usual "woman of the week."
Jim: 1960s script writers being 1960s script writers, I guess.
Trey: Like the Loveless episodes, this one makes the villain out to be quite a remarkable man. Much more so than West or Gordon, despite their obvious talents. He taught himself hypnosis, engineering and surgery, apparently.
Jim: He does seem somewhat sympathetic, too, even we as deplore his murderousness. He says the officer's cheated in the faithful card draw that led to him being nearly killed by the enemy attack.
Trey: He says that, though the episode doesn't address the truth of his claim. I think WWW is too positive regarding Grant for that to be the case.
Did you notice that when West follows Nina to Torres's mansion, there is very much a horror vibe to it. Dracula's organ theme (Bach's "Toccata and Fugue") is even playing!
Jim: That was a weird, but a nice touch. My favorite part is when, early in the episode, Artie and Jim are seen going through paperwork. I love this visual. It tickles me to think of them having to wrangle bureaucratic red tape in between adventures.
Posted by Trey at 7:00 AM