Revisiting the Wild Wild West: Night of the Inferno 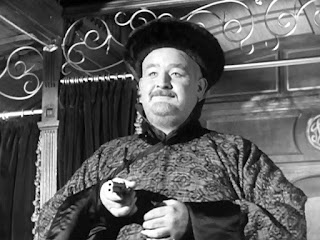 "Night of the Inferno"
Written by Gilbert Ralston
Directed by Richard C. Sarafian
Synopsis (from Wikipedia): Posing as a rich eastern "dude" traveling west in his own private railway car, Jim goes to the New Mexico Territory to track down General Juan Manolo, who is trying to take over the region.

Trey: So this episode, at least, gives West a cover story. In a way, sort of two cover stories.

Jim: Yeah, we meet James West as he's being escorted in handcuffs, as a prisoner of the army. The reason for this is to provide a cover so Jim can meet with the President, but it's mostly a viewer hook. Then Grant (played by James Gregory) introduces Jim to the idea of his undercover identity as a rich dandy traveling the US in his own lavish coach car. Jim likes this idea and when next we see him, he seems well at home in his coach, down to knowing the names of hidden carrier pigeons. He also seems very well acquainted with Artemus. So, presumably, this is not their first mission, but some time may have gone by since we last saw them together at the previous train depot. Neither Artie or Jim remark on the luxury stylings of the coach.

Trey: And this never comes up again. Mostly, West seems to be recognized and his dandyish attire--purple bolero jacket and all--is just the way he dresses. I kind of like this explanation, but repeating it every episode might have been a chore.

I should also note that the two explain the workings of the hidden guns and explosive cue ball. All this will be used later.

Jim: A word on Robert Conrad's acting. Series writers often expressed some angst that Conrad was a bit wooden or delivered all his lines the same, I believe. On that, I would say, such a show doesn't need two Falstaffs, but rather a Romero and a Mercutio. As such, Conrad and Martin fit the bill quite well.

Trey: I always felt there was an archness to Conrad's delivery. He's a spy playing a game, where most of the time both sides know it's a game. He's never trying to deceive, just trying to be coolest in any exchange. It reminds me of more than one Bond actor.

The central concept of this episode is that somehow the border situation is so difficult that the U.S. Army can't go in to squash these raids but instead has to send in West and Gordon to the town of Quemada to stop Manolo--assassinate him, if he can't capture him. This reticence to act seems more Cold War than 1870s. It will be interesting to see how Mexico and it's relationship to the U.S. is portrayed through the lens of the era in which the show airs as we go forward.

Jim: So in Quemada, we meet the amazing Victor Buono, best known as King Tut from the Batman tv series, as Wing Fat, the Asian import shop owner, who is more than he seems. Jim remarks that he's "the biggest Chinese" he's ever seen, which may be foreshadowing.

Trey: Buono is great. It's unfortunate this episode has him in yellowface and (spoilers) brownface. But we'll get to that last part in the bit.

Jim: Wing Fat directs West to the "love interest of the week," Lydia Monteran played by the captivating Suzanne Pleshette, famous as Bob Newhart's wife on 1970's The Bob Newhart Show and from Support Your Local Gunfighter. Monteran operates a gambling establishment in a casa on the hill, and she has history with West. He arrested her before! 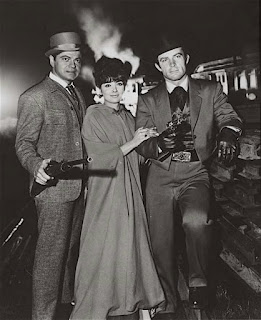 Trey: Not a willing source of information on Manolo, yet. West and Gordon are forced to do some snooping in the crypt beneath the house and find stores of gunpowder and weapons. West confronts Monteran about this, but she is genuinely unaware. It's all the doings of General Cassinello, who makes his appearance. He ruffs West up a bit, but no fancy death-trap like we will get later in the series.

We think he's Juan Manolo at first (he even seems to appear as Manolo in a montage during the early exposition) but he's a stand-in, though it takes a while before West finds this out.

Jim: Nehemiah Pershoff plays the General. For whatever reason, Pershoff never really broke big in Hollywood, but he is, by far, the best actor in this episode (excluding Martin.) He was a staple of 60’s and 70’s television with tremendous range. For proof of that, one need only review his standout performance on Hawaii Five-0 in the episode "Will The Real Mr. Wrinkled Please Die."

Trey: Well, the General turns out just to be another stooge. West destroys the house and munitions, and just when our heroes seem free and clear, the real boss reveals himself--and it's Wing Fat! Or Juan Manolo.

Jim: Oddly, Buono never drops his Charlie Chanish articulation, even after he reveals himself as Manolo.

Trey: This was odd to me, too. He even gives the Mandarin pronunciation of "Juan Manolo" for some reason. I couldn’t figure if they were trying to tell us that Wing Fat was the real identity and Manolo a fiction.

Jim: We don't find out the truth until West and Manolo have a game of billiards. True to rules of drama, the trick cue ball and pool stick is used to dispatch Manolo.

Trey: And we discover that Manolo's Asian mastermind disguise was just a disguise. Manolo is the real identity. When West asks for the reasons for the subterfuge he replies, "Who would suspect a Chinese merchant of being a leader of armies?"

Strangely, a mastermind bent on hiding his identity taunts West with his dying breath that no one will know of his victory. West replies it doesn't matter. Espionage and spycraft is nodded at here, at least. I doubt we'll get many more such discussions.
Posted by Trey at 7:00 AM