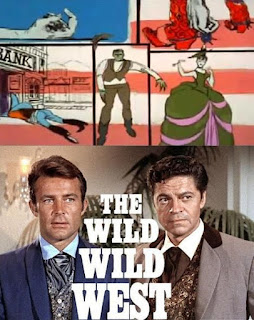 In 1964, the British Invasion began transforming American pop music, but the influence of a much better groomed Brit was also been felt on television and in film. The first two James Bond movies had been hits both in the UK and the U.S., and the third, Goldfinger, which would arrive that year, would unleash a veritable spy-fi craze.

The Man from UNCLE debuted in the fall of 1964 on NBC. In the 1965 season, it was joined on NBC by I Spy, and on ABC, detective show Burke's Law transformed into Amos Burke, Secret Agent for its final season. CBS unveiled Wild Wild West.

Michael Garrison, the creator of WWW, had been early to catch on to spy-fi's appeal. He and a partner had bought the rights to James Bond and tried unsuccessfully to get studios interest in a film in 1955. In the mid-60s he had another idea. he pitched CBS a show with the high concept: "James Bond on horseback."

While Westerns were not as prominent on TV in the U.S. has they had been in the late '50s, there were 13 on the air in 1965. Combining the old standby with latest fad makes a lot of sense from a ratings perspective.

From any other perspective, it's a bit weird. 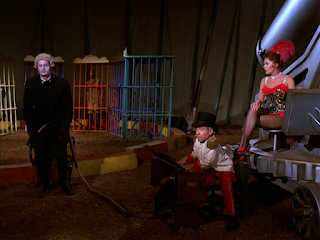 The spy-fi was an outgrowth of its early Cold War environment. The pulp hero who traditionally worked alone or maybe with a team became the representative of some government agency. While spycraft was a completely different beast in the 19th Century, to meet the expectations of its audience, James West's world had to look more like a funhouse mirror version of the 1960s, as reflected in the Bond films. West's Secret Service acts more like UNCLE or Bond's fictional MI6, than the fledgling organization of historical 1865. West doesn't spend much time chasing counterfeiters.

Spy-Fi also relies a lot on gadgets. This makes connects it to science fiction, but the gadgets tend to have a higher degree of verisimilitude (even when utterly implausible), so that it doesn't read as such to the audience. Gadgets in James West's hands are a different matter. Often, even the most rudimentary glosses of their function require reference to technologies or scientific theories that didn't exist in his time. The same gadget in West's hands is inherently more fantastical than in Bond's.

From the Western angle, the requirements of Spy-Fi necessitate more urban settings, or at least more civilized ones ,than might be typical for horse opera. West can spend little time in austere landscapes (which is good for a tv budget, admittedly), and can't consort with as many frontier-types as might be usual. It is perhaps more 19th Century, than genre Western. 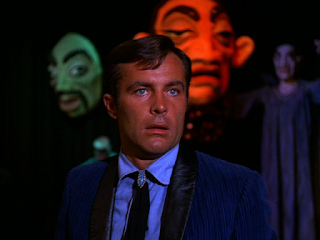 My feeling is that Wild Wild West is at its best when it embraces these contradictions, rides right through basic genre conflicts, and dives into unreality and fantasy. The more James West's adventures seem to fit aesthetically with the voyages of the starship Enterprise or the crimefighting exploits of the Dynamic Duo (to name two contemporaneous shows), versus the dust-colored world of Gunsmoke or the comparatively mundane action on I Spy, the better it is.

So in coming installments, we're going to take a look at the series to see if that bears out!
Posted by Trey at 6:00 AM