The Revamped Batgirl - What do you think?

When the plans to revamp Batgirl for a (more modern? younger? more female?) audience was made a few months back, I was one of the few people on the io9 site who applauded the initiative. Now that a 10 page preview of the first issue has been released on Bleeding Cool, I'm having second thoughts (as are many other people who saw the preview on BC) 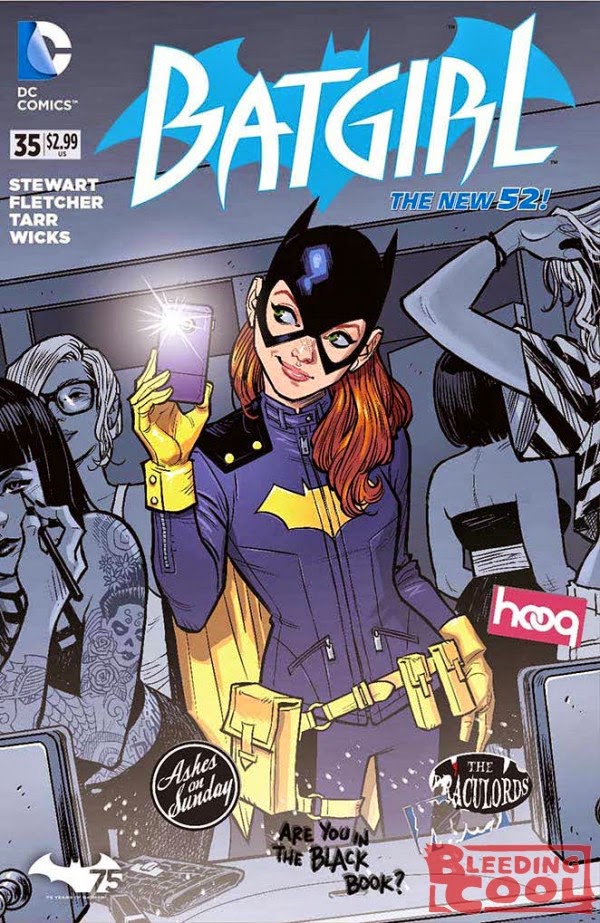 On the plus side, I really like the art style. It's a definite 180 degrees turnaround from the standard DC house style that dominated most of the DC New 52 books. (Click image to see full size) 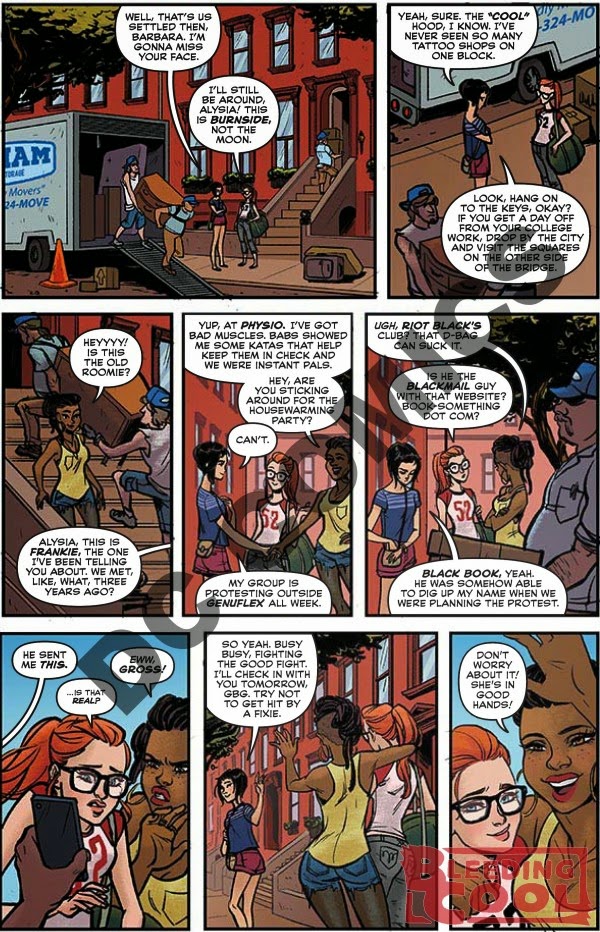 On the con side, I'm bit confused by how this character acts. She seems markedly younger than the Batgirl we've been reading about over the years. She comes across as a bit addled and self-absorbed. I suppose that part of the demographic tonal shift, but this hipster 20-somethingizing of Barbara Gordon is disconcerting and a bit stereotypical as all the standard roadsigns for youth are trotted out (smartphones, texting and Starbucks coffee) However, I suppose we have to recognize that it's no more cliched than any other standard comic book story being put out by DC.

Still, not all of this revamping sat well with everyone. On the Bleeding Cool messageboard, the most polarizing event in the comic was when she woke up after an all night party where she had gotten so drunk she forgot she was making out with some guy. 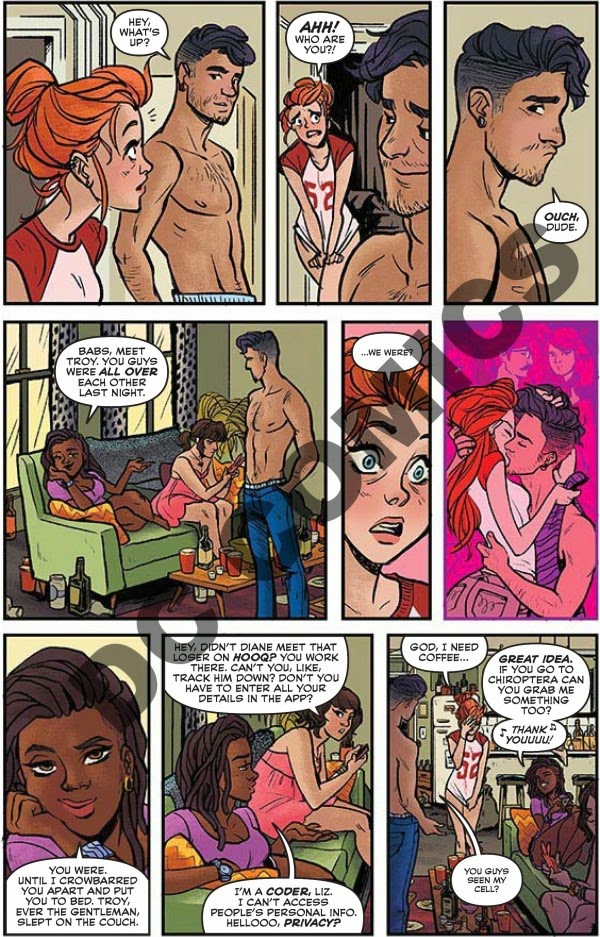 This was met with a lot of scorn by some commenters as they decried such behavior in an established character. When I first heard about it, I too was taken aback, but in the context of the comic (which again is a complete revamp for a new demographic) it works.

Would it have sat easier with me it was a completely new character? Well, yeah. But again, as a calculated business move designed to appeal to a new audience, it makes sense.

Will it actually work business wise? Hard to say. The majority of commenters at Bleeding Cool were very positive on the preview, so that's a good sign for DC. And let's be honest, sales numbers on the old standard Batgirl weren't setting the world on fire were they?


Excluding what looks like a variant cover bump in June, the book has been steadily falling, so something had to be done.

Still, it's hard to give the whole thing a thumbs up when you have Batgirl saying things like, "I'm legal loser!" in response to a question about her age. (panel 8 on the page below) 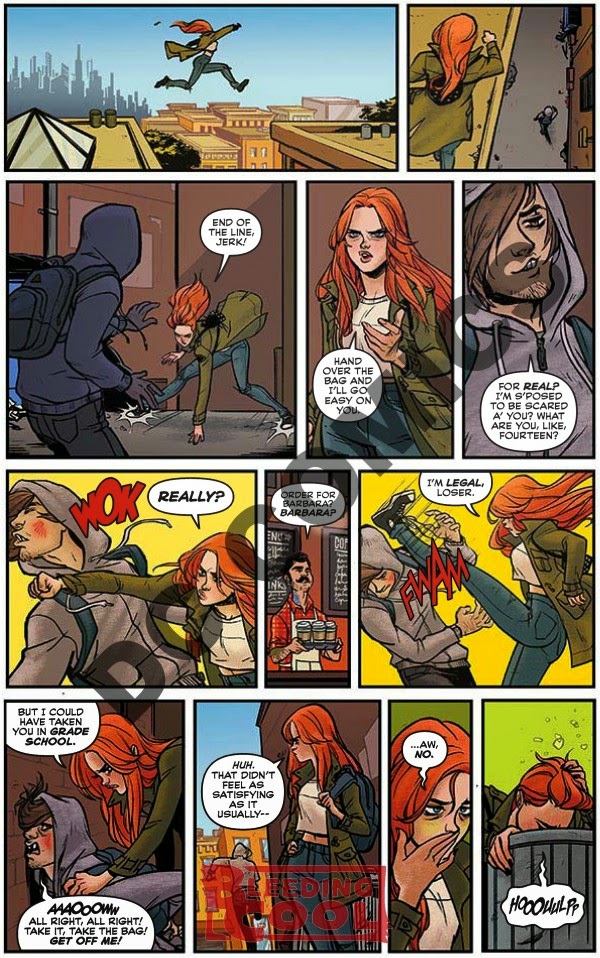 It'll be interesting to see how this pans out for DC.

Where was the io9 commenting negative? The articles I saw there and elsewhere had mostly positively comments (with people perhaps not liking certain details of the costume).

On reading the preview, I would agree with "younger" (and Black Canary seems younger too), but I think addled and self-absorbed is a bit unfair. her research suggests her intellectual chops and her beating up the thief her physical ones. She's hungover (which we're told is uncharacteristic) and she's being a bit insensitive in places (again, the dialogue suggests that this is unrealistic), so I assume we are to take this as her "going through something" (though we're not told what, yet) not a statement on her character.

Solid, I think. It's obviously aged at a different demo than middle-aged males, so it's not really surprising aspects of it great on them. On the plus side, I don't really find it particularly pandering. It reads like a street level superhero intro aimed at the young--a lot like Ultimate Spider-Man was at it's start.

I mentioned I liked the idea of being able to read this to my 9 year old on twitter and one of the creators said it was for older audiences - but it seems like they miss the mark and fall somewhere between the lines.

I'm not sure why people are all aghast at how it's unlike the character and irresponsible in a way that she wouldn't be. The world is FULL of straight-laced, uptight, and otherwise responsible teens who let that guard down for a little bit and did something that isn't in their otherwise perfect and predictable character. She doesn't seem to be PROUD of her actions, they're just what happened when she cut loose.

Additionally, a superhero trained by the legendary hardcase Batman who is still making stupid teenager mistakes? I want to read that! What isn't interesting about breaking the mold of the perfect protege of the world's greatest detective?

I just don't get the problem here. Barbara isn't suddenly shooting up heroin and pole-dancing at a gentleman's club, she's being a teenager at college. To me this reads like character growth, which I would think and hope the fans who often complain of stagnation would be in favor of.

It may provide a brief bump in sales, but it'll fail in the long term.
Also, because of the extreme topicality, it won't do well as a reprint, except as a curiosity to readers a decade from now who'll look upon it it the way we look at the "mod" and "hip" books of the '60s that tried to be topical.

@Trey - on io9 there are quite a number of negative comments (as well as positive.) I only have to scroll a little bit before I find "That is...that is lame. Cripplingly lame."

But as you note, there are a lot of positive comments as well. (As well as comments on the boots, ignoring Killing Joke, color choices, ect...) As always, the comments section there gets on tangents.

You may be right about me being unfair on calling her addled and self-absorbed. The reason I said that was her reaction to not remembering the boy from last night (when we are shown later in the preview that she has a photographic memory of the events) and her conversation with Black Canary. But as the conversation seems to be a reaction to events in another comic (not a great choice for a new reader issue btw) it stands as atypical.

@Caine - yeah, I was originally thinking this might be more like Teen Titans or something and would be something I could read with Haigen (also 9) - not so much.

@Luke - I think the issue is this is one of those We Want It Both Ways moves comic companies make sometimes.

On one hand, they clearly want to tie this into the current DC continuity to retain whatever value/interest that brings them.

On the other, they want to tweak her personality and background so she will reach a new demographic.

There's obviously going to be some dissonance there - and so there was.

IF this book had been called Ultimate Batgirl and came with a brand new continuity, I don't think you would have seen as many complaints as this got.

And mind you - the complainers were far in a way in the minority (at least on Bleeding Cool.)

@Britt Reid - I believe you are right, but I don't see that as a failing of the story or the art. I think this is just a tough damn market to sell comics in. New stuff has a hard time taking root.