Sorry about missing Thursday's post - I started a new job which has me commuting for the first week for training and my days got squeezed for time. To make up for it, I may have a surprise for this week (depending on how things go...) -- Anyway, Gotham premiered last week and here's what I thought about it (spoilers btw) 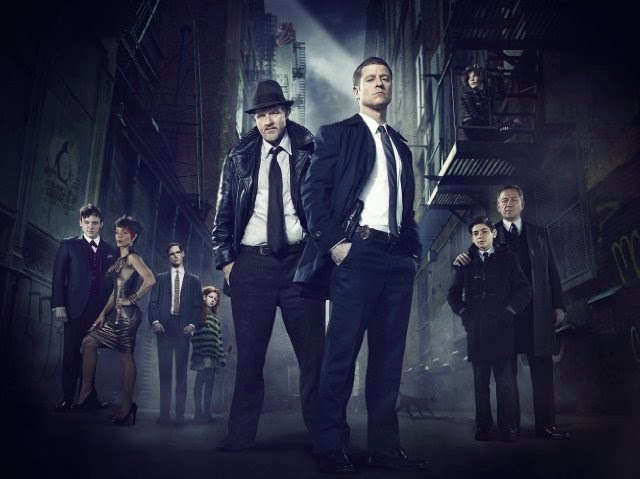 1. Ben McKenzie seems well suited for the role of earnest, honest James Gordon.  For the most part, I found his acting and the actions of the character pretty believable. I'm less sold on the role he's been tasked to play as the trope of good cop versus corrupt system is a hard sell to me. For the most part, that role worked okay here. There was one scene when he was chasing a suspect (Mario Pepper) across a rooftop, shouts stop or I'll shoot and then let's the suspect just sort of getaway without firing (not even a warning shot.) That struck me as, I don't know...a bit more Hollywood cop than Gotham cop.

2. Despite my reservations with the honest cop trope, I like the new cop/old cop dynamics between Gordon and the older, corrupted by circumstances, Harvey Bullock. This looks like a relationship that can give birth to a lot of plot twists and character development. In many ways, I find Donal Logue, the actor playing Bullock more interesting than Gordon.

3. The quick introductions of characters worked about as well as it could I guess. In some cases, like the Edward Nigma/Riddler scene, if felt almost like a parody of how such character introductions are handled... 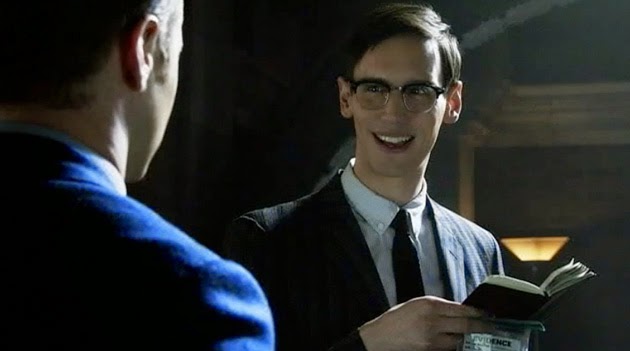 ...others, like Pepper Ivy (who will one day become Poison Ivy) worked a little better. 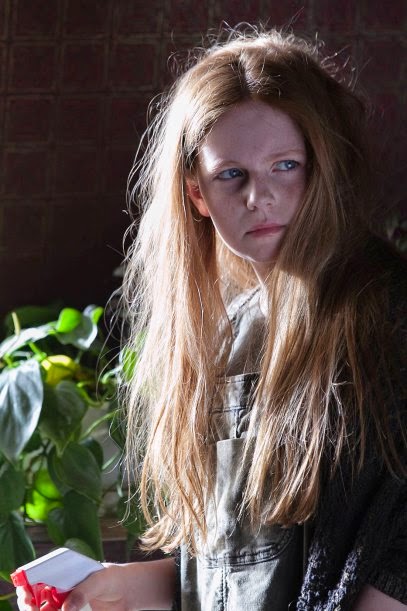 Carmen Bicondova's Selina Kyle didn't do much for me one way or the other, mostly because she was less a real character and more of a walking prop during the pilot. She spent a lot of time climbing on things and watching stuff. Hm...and feeding cats, just to clue you in to who she is. 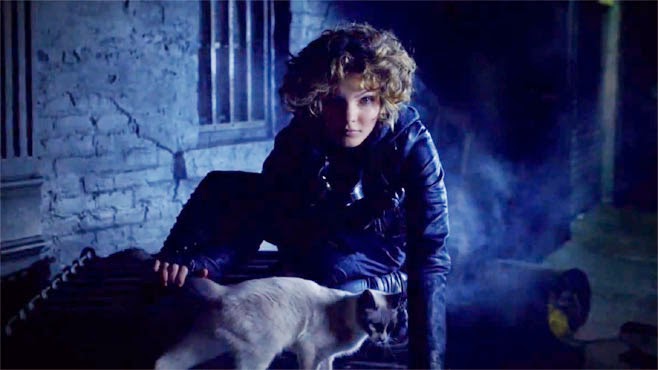 Still, like I say, it's a pilot, so a certain amount of info dumping is to be expected. I'm suspect future episodes will flesh out her character in a very YA sensible manner.

4. I really liked Robin Lord Taylor as Oswald Cobblepot. I had heard that pre-screenings of the pilot had picked Taylor as the breakout actor of the series, and it's easy to see why in the pilot. 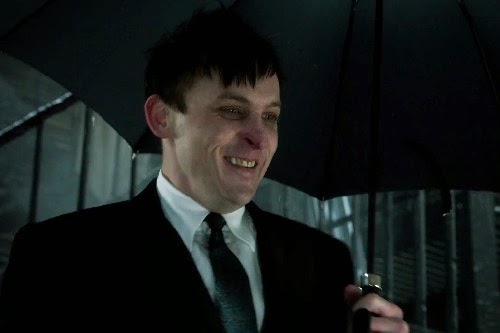 Any time he's on the screen, he's mesmerizing. He's a frantic bundle of twitches and ticks that puts tension into every scene he's in. Again, there was that one scene with him that struck me as a bit over the top (the final scene with the fisherman) but everything else with him was great.

5. Seems like a lot of people were put off by the the characterization of Alfred in this pilot. I'll grant you, it was a bit more aggressive/cynical than what we comic fans might be used to. During the scene where Gordon is telling young Bruce Wayne that his parents killer has not been found, Alfred comes across as hostile, but there may be some internal logic to that characterization, so we will see how it plays out. And to be honest, in some ways it's a bit more realistic vis a vis the situation than how Gordon acts at times.

Overall, I enjoyed the show and am looking forward to future episodes.

What did you thing?

I'm glad there was not a single sliver of a thought of the Joker and I hope there isn't for the first couple of years. Once they dip there toe into that pond, GOTHAM will be less of an original creation of it's own and more of a Batman Trope. There is plenty to do with every other character that calls Gotham (or even Bludhaeven) a home, they don't really NEED Joker.

I liked seeing Montoya show up in the "Major Cases" squad. Once the snow ball begins it's decent off of a gargoyled roof we all know it's not going to stop until it blankets the city with super villains. Major Case Squad will be where the action is and I see Gordon and Bullock transferring over there in the midst of a Season Finale Cliff Hanger.

Donal Logue is amazing as Harvey Bullock and steals any scene he's in. It's easy to see why Donal was the first one cast.

I thought Fish Mooney was a great creation for the show - with a name like Fish she's bound to be the catalyst for turning Cobbelpot into the Penguin - I wonder if she'll survive it? ;)

I pretty much agree with your points, except for the one on Alfred. If we only take the comic book Alfred Pertwee's characterization might be a bit jarring, but if you think of him as "Michael Caine Alfred as a young man" (which I assume was how the part was written), I think he's pretty much dead on. Also, he reminded me of the more pugnacious, ex-special forces Alfred of Beware the Batman.

@Caine - Actually, I think the comedian we see trying out for Fish was at least a nod to the Joker--whether that's him or not.

@Caine - Yeah, I think your prediction about the direction of the show will most likely turn out right. I also agree that they should keep the Joker in the background for as long as possible.

@Trey - I can see the resemblance between the "Michael Caine" Alfred attitude - especially given he's younger here. AND we don't know his background here (which may be exploited more readily here.) It wouldn't surprise me if he doesn't have some sort old military background that will come into play at some point.

On the Joker thing - I think I read somewhere that the show is going to provide us with a multitude of possible jokers (but never really present one - at least for the first season.) So each presentation will be a bit of a faux Easter Egg every time.

I really liked the show. The graphics of the gunshots put me off a bit. I get we are on a budget but still. Do you think the killer will still be Joe Cool or will they go somewhere else with it? Is this the Falcone that Batman deals with? I feel like he's really old. No telling how old he would look once Batman actually hits the streets. Episode two that airs tonight is actually titled "Selina Kyle. “So it seems there will be more there. I know this is kind of nitpicky, but she stole a half gallon of milk, and then the next scene it's almost empty. I don't know why that stood out and bothered me, but it did lol. I loved penguin. Alfred seems to be based a lot off of the Earth One Batman story that Geoff Johns wrote. I dig it. Having a military background would help us see some of Bruce's early training. All in all I liked it, didn't love it.

@caine every episode will feature someone who could possibly be the Joker. So when we do finally see him in Gotham, More than likely as the leader of the Red Hood gang. He will still be covered in mystery.