The Return of the Pre-New 52 DC Universe?

Regular commenter GACN alerted me to the news that DC may be bringing back some of the pre-New 52 Universe characters. 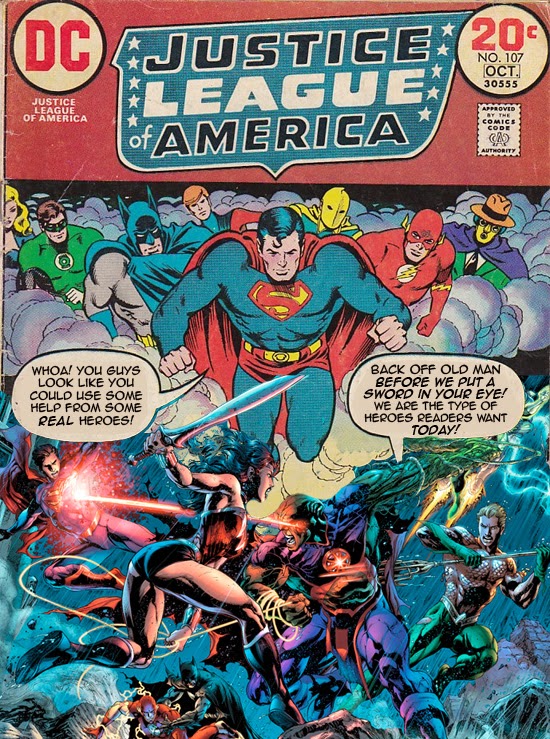 From what the article says, the older versions might be engaged in some sort of Secret Wars type of event story. This would be a sort of filler story (aren't they all now?) which would be published during the time that the DC offices move from the East Coast to the West Coast. Here's what we know so far:

What do you think? Are you looking forward to this story? Might it open the door to more stories from the pre-New 52 Universe? Would you like DC to just reboot back to the Pre-New 52 Universe altogether?

The confusion points to the thrown together nature of this.

I would quibble with your "filler" dig though. Whatever my problems with what they're writing, I don't think the current crop of writer's view there work as any more disposable or superfluous than earlier generations. In fact, I think the higher esteem comics are held in these days makes current creators value their arcs more.

I know that I personally will not waste one dime on a reboot ... unless it is a return to the pre-CRISIS era ... yeah, I'm getting loopy obviously, but that is the only way DC can win my $$$ after the 52 ... pre-CRISIS! Earth-1, Earth-2, Earth-X, Earth-S, Earth-B, etc., etc., that is what made DC so much fun ... now it is all about how many books they can con one into purchasing with multiple covers and gimmicks. I say Pre-CRISIS or Bust!

I honestly wouldn't put it past Didio to trot the Pre-New 52 versions out for the soul purpose of humiliating them and/or gutting them on camera.

I echo MattComix's sentiments. I dread this because of the horrid things they might do to the Pre-New 52 characters. In my mind, their stories have ended, some characters even had their happy endings (like Wally West). Much like how Alan Moore gave Pre-Crisis Superman a happy ending (albeit with a whole lot of tragedy beforehand.

But to trot them out now and do God-knows-what to them, I'm not very optimistic.

And I would agree that by and large, current creators probably view their works as having a bigger impact (especially with the chance that it might get adapted into the movies in some form)

@GACN - yeah, there was a lot to love about the old Pre-Crisis universe, but I sincerely doubt we'll see that ever again.

On the flipside, Grant Morrison's Multiversity is promising. He might tap into some of the old Pre-Crisis vibe.

@MattComix - yeah, I could totally see that being the directive handed down by DC editorial.

Still, with some of the creators on board (Len Wein, Marv Wolfman) it's possible that given the haste and scattershot approach to how the books are coming together, that the editors will be less concerned with how closely the writers follow some grand directive and will just be happy to get the damn books out on time. :D

@Reno - I really like how you explained that! That puts a nice spin on the whole end of the old DCU for me!

A friend was trying to explain to explain why this is a big deal to me the other night and I just didn't get it.

DC is going to introduce some old, pre-52 characters - lets say Tommy Tomorrow or the Silent Knight or the Lords of the Ultra-Realm - into the new-52 universe. Okay. How is that different to DC just introducing new-52 versions of these characters? How would you tell they were the pre-52 versions? They could be exactly the same as the pre-52 versions, but that wouldn't mean anything. Various characters and titles - Green Lantern, Batman, Legion of Super-Heroes - continued into the new-52 relaunch completely unchanged from their pre-52 continuity. In practical terms, their new #1 issues might as well just been the next issue in their old numbering.

So what's going to distinguish these pre-52 characters from just new-52 versions of them? How would we tell they're the pre-52 versions?

I'm really not seeing why this is a big deal.

Bring back the old universe, there is nothing original about the 52s, take Wonder Woman for example, she used to be a princess brought to life from clay and gifted by the gods, and now she is the daughter of Zeus, that's been done to death, their uniforms all look alike just different colors, it's a generic universe thought up by people with no imagination what so ever rehashing old stories and destroying why it used to be fun to read comics....