As a kid in the 70's, there were several things a comic could have on the cover that would guarantee I'd buy it. One was Robots. The other was Gorillas.

So when The Secret Society of Super Villains number 1 showed up in May 1976 with it's cover of Gorilla Grodd shoving a bunch of JLA robots into a trash can, it's a safe bet I was digging into my Toughskin jeans pocket hoping to find .30 in change.

Fortunately for you, I did, so today I can tell you why SSoSV was not only a fun, zany bronze age comic, but also a template for how comic stories would eventually evolve into what we have today.

But let's back up a bit. For those of you not familiar with the series, a brutally quick summation is this: A clone of the Simonson/Goodwin Manhunter rounds up a bunch of DC villains (Captain Cold, Mirror Master, Captain Boomerang, Star Sapphire, Sinestro and Copperhead) to form a Secret Society.

It is soon revealed that Manhunter is actually following the orders of Darkseid who wants to use the society to help cause something he refers to as EarthDeath. However, this Manhunter is just as noble as his predecessor, so he pulls a double cross and convinces the team to try and stop Darkseid. Working together, the rogues defeat the ruler of Apokolips. Afterwards, they agree to remain together as a team. 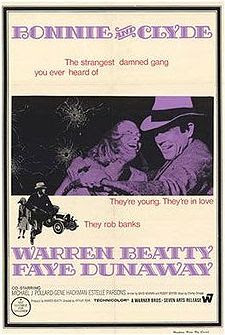 Now one might ask - what prompted DC, whose bread and butter was superhero comics, to start publishing the exploits of a team of villains? Well, as it turns out, DC was simply riding a wave of antihero interest in popular culture that had most likely started with the Arthur Penn's 1967 Bonnie and Clyde movie and culminated in 1972 with Francis Ford Coppola's The Godfather. At the time, public fascination with antiheroes/villains was at a level not seen since the James Cagney shouted out to his Ma in White Heat.

In the comics world, Marvel had begun exploring antihero stories with Super-Villain Team Up, a comic which started as a set of two giant sized annuals featuring Dr. Doom and the Sub-Mariner. Not much of a stretch actually as both characters had been featuring in books before, Dr. Doom in Astonishing Tales and the Sub-Mariner first in Tales of Suspense and then in his own title.

No, it was actually DC who was taking the new surge of antiheroic interest and using it to a better advantage. Their first attempt was the half-hearted Joker comic which could have been a very interesting comic had it not been hamstringed by an editorial mandate to soften the Joker. As a result, the series, which had some fun moments, was generally incongruous with reader expectations of the Joker and ended up getting cancelled after 9 issues.

On the flipside, the SSoSV was not burdened by this same editorial mandate, or if it was, it wasn't as obvious. Originally helmed by writer Gerry Conway and artist Pablo Marcos, the SSoSV had a bit darker tone than the Joker series. The first issue ends with Copperhead getting shot and left stranded in the sea by Gorilla Grodd. This sets the tone for the entire series under Conway's watch as characters come and go very quickly, often dispatched in violent ways. During the course of the first few issues, there are several "deaths" of characters:

It would have been interesting to see where Conway took the initial plot line, as he must have had a grand scheme in mind. However, he left the title by issue 2 and he remained off the book until issue 8. During his absence David A. Kraft wrote 2 issues (3 and 4). Then Bob Rozakis would take his turn for issues 5 through 7.

While Kraft did an admirable job picking up the story set forth by Conway, Rozakis' turn on the book was quite different. After finishing up Conway's storyline with Darkseid and Manhunter, his next issue was a rather Silver Agey piece that played off the novelty of having 3 villains with Captain in the names. Issue 7 involves Lex Luthor wanting to defeat Superman on the set of the Superman movie. Both of these stories feel like fill ins and are probably the weakest issues in the series (despite having some fine Rich Buckler art!)

Fortunately, with Conway's return in 8, the book regained more of its original feel. By issue 9 everyone is plotting against each other again and Gorilla Grodd is stomped nearly to death by a Dragon.

Despite the handicap of having writers shuffled on and off the title, there were quite a number of places where the stories excelled. For its time, SSoSV featured more violence, faster pacing, more character intrigue than other comics being published by DC. Most likely this is because SSoSV featured villains as the main characters, which gave the writers more latitude in their storytelling. 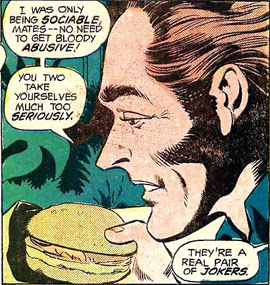 There are certain corporate expectations to be met when you write a comic featuring a character licensed out to Underoos. However, the suits don't bat an eye if if Captain Boomerang gets beat to a pulp by Darkseid - or just hangs out by the pool and eats some fast food.

I've mentioned the violence that was abundant in the series, but what was really novel was the non-violent moments. In issue 3 The crew is indeed just sitting poolside enjoying a meal from MacDonald's. It's a rather mundane scene that humanizes the characters in a way that you would never see in the pages of JLA at the time. This presentation of the more human side of the villains is definitely something new the series brought to comics.

Another nice non action scene is in issue 11 when the Wizard finally dispatches Funky Flashman (a tiresome Stan Lee stand in created by Jack Kirby.)

Issue 15 ends the series and it's a shame it ended there as the level of intrigue was definitely growing amongst the team members. There is an interesting scene with Star Sapphire and Professor Ivo and a nice bit with Mirror Master and Copperhead. It's the issue that best captures the feel of Conway's original vibe.

In a way, the SSoSV with its flawed characters and their exaggerated human foibles and higher level of violence could be seen as a template for how comics would progress into the modern age. 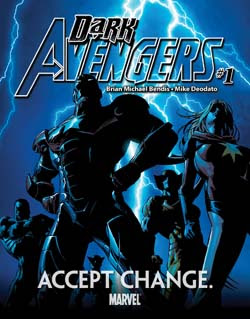 When readers get tired of the normal faire of superhero comics, the industry often reacts by devoting a title to some super villain. Eventually this leads them amping up the level of violence and humanity of their A-list heroes.

The SSoSV was the first example of this, but over the years the formula has played out time and time again. In the 80's we got the fantastic Suicide Squad by John Ostrander. In the 90's we saw Venom get his own comic. Currently, one of Marvel's bestselling titles is Dark Avengers - a title that features villains.

In the 90's the success of a bloodthirsty Punisher led to everyone wearing leather jackets. Then there was a backlash against the badass character and the pendulum swung back - but not all the way back. Usually once you've given Aquaman a hook and a beard to make him a badass, it's hard to go back to your 1950's Arthur Curry.

So there you have it - you want someone to blame for all those horrible leather jacketed heroes in the 90's? Look no further than Gerry Conway and the SSoSV! :D

He's was also responsible for the Punisher as well.

I like your blog and all, but you really need to use a lighter font for the text in your posts. I can barely read it and considering how long your posts generally are it'd be nice not to strain my eyes. you'd probably get more readers, too. Good content though.

Yes, that does look a lot better then before. :)

Cool, I wasn't sure about it, but I think it is much easier to read now. Thank you for the suggestion! :)