After the “CINAR scandals”…. Life was not much different for me.
I still was getting steady work…. But work dried up for many people.
Some I know ended up working in warehouses, fast food restaurants… some even ended up collecting welfare checks.
But I was one of the lucky few who were still getting steady work.
One of the reason for that was that I was fairly fast, allowing me to do a truckload of work.
But more importantly, I was a workaholic.
Heck at some point, I was working on 2 productions for 2 different studios at the same time.
I was working from Monday through Thursday on one production, and from Friday through Sunday on another.
Yes I am crazy.
I mentioned before how I was not just going from job to job, but how I was building my career.
I was driven. I was willing to do whatever it takes.
If only it was so simple.
After the “CINAR scandal”, most of the productions I worked on, other then the seasons of Arthur I worked on, are not really worth mentioning.
And there is one production that I do not want to mention, because even today….. I am still pissed just thinking about it.
Heck it almost ended my “career”.
The production was messed up.
The producer had no clue as to what he was doing and how an animation production worked. It was their first animated series.
We had TWO weeks to develop the project. Two WHOLE weeks.
When you think that you are competing with studios that will spend months developing a project…. And what you get is two weeks??
Not a good sign.
A great example of a producer that did not know what he was doing, I had designed and made the rotation of the main character, and when the producer saw it… he asked that we fix/change the design. So I pretty much spent most of the two weeks we had trying to come up with a new version of our main character.
And after two weeks and wayyyyy too many design attempts… the producer came into my “office”… or should I say my “work space”… and saw one of the many designs that I had posted on my wall.
He said; “That’s it! That design is exactly what I want. It’s perfect!”
Guess what… it was the very first design/rotation that we showed him two weeks before.
And it was like that all the time. He would change his mind all the time for no apparent reasons and did not seem to have a single clue as to what he wanted or was doing.
But strangely enough… that was not the worst.
The worst part was that one of the designers was the girlfriend of an artist that the producer really liked, and to please that artist hoping that he would be willing to work for him at some point, he would keep the girlfriend on the payroll.
And the worst part was that she was under the delusion that she was the art director.
And not to displease her boyfriend… the official word was “Let her do what she pleases.”
That was not fun. 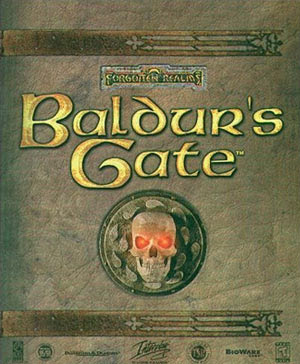 I took a few months off after that playing Baldur’s Gate, Baldur’s Gate 2 and other IE (Infinity Engine) games.
I really needed a break.
I thought I was burned out because of work, but in retrospect, I realized that part of why I was burned out was that I also had a room mate that was “leeching” a lot of energy.
But still there was less and less work.
So my few months off ended up being actually 10 months off.
And that was because I was willing to do any work… so long as I was drawing.
So I ended up doing some work that many others would have seen as beneath them.
The one positive thing in all that was that it gave me some time between animated projects to really try to make some comics.
My goal has always been to make comics, but somehow I got sidetracked into working into animation… which I did not mind, it usually was good work and paid well, and heck I even enjoyed most of the productions that I have worked on. But what I really wanted to do was make some comics.
And now I had some time between my animation assignments to try to make some comics.
I will talk about that the next time.
Posted by Jim Shelley at 6:25 AM