Wow, there is talk all over the Internet concerning Diamond's distribution [they distribute comic books] raising their thresholds [the amount of books a publisher must sell each month in order for Diamond to distribute them], and Marvel comic books raising their cover price to 3.99 a book.

These are both very large revelations, the effects of either one could easily be debated indefinitely [and probably will be for some time]. That also means each event's Paper Comics Death Watch score would be very high indeed. You might say, and I'm going too, their scores would be incalculable [particularly since the entire scoring process is completely made up].

With prices and thresholds going up at the same time, digital comic books are looking like a better and better alternative to all sorts of publishers...

Ad revenue is largely believed to be the primary revenue source comic book companies use to make money. The more comics they sell, the larger an audience they can offer to their advertisers for which the publisher can demand a higher price for the space to advertise in the comics themselves.

Ads are becoming more and more frequent in comics and have been for years. Lets look at two similar comics for comparison:

In July 1984's Tales of the Teen Titans there are 25 story pages and 6 ad pages [not including the inside front and back cover]. 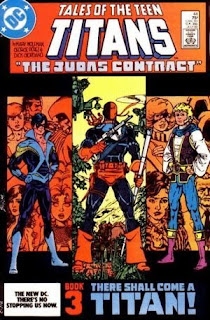 In March 2009's Titans there are 22 story pages and 9 ad pages [again not counting the inside front and back cover]. That's an increase of thirty percent non-story pages for the consumer who's now getting less product for more money.

Both issues have one single "info page" [weren't they doing letter pages in '84?] as their last printed page before the cover.

In the '09 Titans 8 of the 9 ad pages were for "in house" products [products that either directly or indirectly sold DC/Warner Bros. items that are related to comic books] and the 9th one is an ad for the movie "Push" which may still be linked to Warner Bros in some manner not advertised on the page it self.
In the '84 Titans only 2 of the 6 pages are "in house" ads. Others include ads for Nabisco and Kmart among others.

In either event why then would DC fill the ad pages with "in house" products? Why not take the opportunity to pull those pages from their books so they could print fewer pages, lower postage costs to the retailer, and make more money on each issue?

Digital Comics fixes all of these problems.

With digital comics you could put any combination [within a tolerable limit] of extra ads into each issue of each comic book at little or no cost to the consumer or retailer. This is free money being thrown down the drain or left on the table as they say. Companies are all ready producing digital advertising for them selves and other retailers.

It would cost Kmart and Nabisco absolutely nothing to email over 10 pdfs to Warner Bros. instead of just one pdf to be placed in the digital comic book.

And the hits just keep on coming. With web2.0, nu media, and social networking it would not be difficult at all for a comic book publishing company to interview you as the subscriber and fill your digital downloaded comic book with advertising that pertains specifically to you.

Your taste. Your gender. You're age group.

I could go on here with eliminating the cost of paper from publishing comic books all together [the green way to go].

There's also the added benefit of a permanent archived library of every comic book published digitally. No more second printing, back orders, or purchasing on Ebay.

If say, in thirty years, someone wants to download Judd Winick's run on Titans they can do so from the publishing company just as if it were the same day it was released. The consumer doesn't have to worry about quality, clarity, or loss of value since its pristine kept digitally forever.

Have a nice weekend