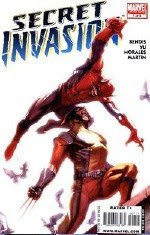 This week, over at Comic Book Resources, Steven Grant summed up the comics year 2008 with this one sentence:

...Homogenized is the other word of the year: "mainstream" comics – superhero comics – are at their blandest and most unadventurous since 1977, insular worms eating their own universal tails. (I won't bother explaining the fatal problem of that cherished insularity, since Abhay Khosla already does a good job of it here.) ...

By and large I agree with him on the current state of comics from the big two. However, What I think Grant is mainly talking about what he perceives as a slump in creativity and innovation among the Big two. This makes me wonder: Has this persumed dreariness affected sales?

Was Secret Invasion that much more interesting than Planet Hulk? Hard to say.

Let's see how it compares saleswise:

Not bad, looks like Secret Invasion is doing pretty well comparatively all things considered. Still, you would think that a mini-series featuring the ENTIRE Marvel universe, that was promoted for over a year and has one of Marvels top writers on it would be doing a little better than 10k copies over one that sort of sprung out of nowhere written by Greg Pak. (Nothing against Pak, he's just not as well known as Bendis.)

Is Trinity more interesting than 52? Hard to tell. It doesn't seem to be generating the same fire on the message boards. How do the sales compare?

Here's how 52 was doing around the same time 2 years ago:

The second thing to take not of is that by and large, 52 followed the adventures of a bunch of B and C list comic characters (The Question, Elongated Man, Black Adam, etc...) Trinity features Batman, Superman and Wonder Woman. Given that these are A list characters, Trinity should be doing better, shouldn't it?

Let's move on to Final Crisis.

The Big Question? How will it end? Will it really shake up DC's status quo?

The Big Answer: Who Cares?

That's a pretty big difference considering that DC has been promoting Final Crisis for about 2 years now. Shouldn't a huge event comic written by THE GRANT MORRISON! be doing better than one written by Geoff Johns? Was it the art by George Perez that increased sales? His name sure didn't help Waid's Brave and the Bold get huge sales.

So outside of surprise hits like Rage of the Red Lanterns (which seems to have made good use of the buzz from the Sinestro Wars), it looks like the creative ennui IS starting to impact event comic sales.

Are you bored with the current comics from DC and Marvel?

Yes
I didn't bother to pick up Batman #681 until eight days had gone by [comics not shipping on Wed due to the holiday]and I went in to purchase #682 assuming that [as advertised with the word CONCLUSION on #681] that RIP would be done and I'd finally get stories featuring Nightwing/Dick Grayson. Of course I was wrong.

You know what, both #681 & #682 are sitting un-read. I chose to read Xmen NOIR [which was cool], a non traditional superhero book that's doing its best to change the statuesque instead.

Thats how bored I am with superhero comics from the big two.

That post is more about Steven Grant's bad mood than it is about current comics.

@Caine, yeah, that X-men NOIR sounds kind of cool to me too!

@RAB, another friend of mine said something similar. It's sort of a throwing rocks in a glass house thing in some ways.

Whether X-Men NOIR is "good" its part of what Grant was talking about in his essay.

Why do we have to have a noir story featuring elseworld X-Men to make Marvel publish a comic or to get comic's fans to read it?

Why not, you know, publish a noir-ish tale with original characters?

"It's like X-Men but NOIR!" begs the question why is it the X-Men?

I think we can agree the reason for having a Noir-ish Xmen story is to get sales based on readers interested in seeing the novelty of the X-men in a Noir setting.

So, it's less about Noir in this case and more about X-men with an Elseworlds flair. Similar to the crazy JLA are all Giant Robots comic that came out a few years back.

I don't know - is a Noir X-men book any different than a Batman turns into an Ape comic? Both seemed geared to scratching an particular itch.

Stylistically, I'd like to see a X-men ala Sin City, just for the sake of the visuals. (Although, I'd argue that if they followed the conventions of the Noir story telling style, they'd probably produce one of the most readable/easily accesible X-men books in the last 10 years...)

As to why not publish a Noir-ish tale with all original characters - there's no money in it. What new character has survived past 20 issues of late?

True Story: When this last version of Manhunter from DC was announced, a very infamouse poster by the name of Onemoment had this to say...

Manhunter by DC. Cancelled in 15 issues.

The dude was lambasted by the posters on Newsarama for his negativity, but he stated that new concepts just constantly fail. Recently over at The Savage Critic Abhay posted a painfully exacting article on how the big two just seem to be constantly failing to launch new concepts. Speaking of Turkeys... So, I don't think Marvel sees a real value to creating new characters at the moment.


Does Marvel even publish comics with original characters anymore? They sort of pay lip service idea with their creator owned line that Powers comes out on, but you don't really see a ton of stuff coming out the gate from Marvel Central with new characters.

Was Gravity the last new character Marvel produced? Who am I missing?

Your supporting my (and Grant's) point, as does Savage Critic's essay about how so called "new" characters (like Blue Beetle) are brought down by the same (old) practices.

Doing the same thing over and over and expecting a different outcome is the definition of insanity.