Pierre Speaks: What is original?? PART 1 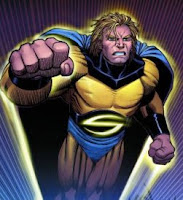 How do you qualify something as original?

Years ago, someone was complaining about how there rarely was anything original anymore.

What I usually do is ask such person "Name me something original?".

At the time, that person used the first Harry Potter movie as an example of something "new and original". That for once... "Hollywood" was making something "new" that had not been done before.

I had to point out how Harry Potter was NOT something original that "Hollywood" came up with. That it was an adaptation made from an already existing novel. And even then... watching Harry Potter, it was difficult not to think of earlier young mages going to the magic school like Sparrowhawk from Earthsea or Raistlin from Dragonlance.

Is there such thing as something original??

Is originality in the eye of the beholder only??

Most people will see Batman as an original character. But it is very easy to point out how the Batman was derived from other characters such as Zorro, the Phantom, the Shadow, and countless others that I fail to mention.

Sometimes when you mention such characters that "inspired" the creation of Batman... some people will mention that what makes Batman original is the addition of various elements such as the Batcave.

But once again, it is easy to point out that the Phantom also had a Skull cave. That Zorro also had a cave under his house (was it called the Zorro Cave?? ;) ). Heck Bruce Wayne having access to the Batcave using the clock in his mansion was lifted directly from Zorro.

That exercise could be done with pretty much any characters.

Superman?? A mix of Hercules, Doc Savage and Gladiator (the novel), a reverse Flash Gordon.

The Hulk?? Stan Lee has said the Hulk was pretty much Dr Jekyll and Mister Hyde made to look like the Frankenstein monster from movies from the 50s.

And these characters in turn inspired other characters that came after them.

In parts 2.... I will explore this question using one of our Flashback Universe character as an example.

Batman original? Dual identity, fights crime...
How about the pre-pulp hero from a Canadian author - the Grey Seal!
j.