FlashBack on your iPhone/iPod Touch 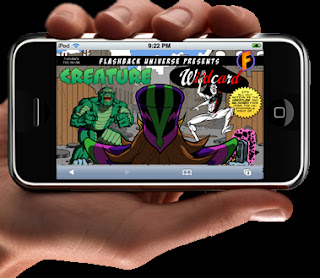 A secret about the origin of the Flashback Universe is that I originally decided to begin my time/money investment in the project after using one of the first 5th generation iPods (the ones that could playback movies...) While admiring how slick the videos looked and how easy it was to use, I knew it would be just a matter of time before someone (most likely Apple) developed a device that would function as an all purpose iTablet, where you could watch TV, surf the net, phone friends and listen to music. So, one of my goals for the Flashback Universe was to build comics for that day... and while that day is still just a little ways off, it got a LOT closer when Apple introduced the iPhone.

So since the the iPhone went live last Summer, I've been waiting to see who would develop a cbr (rar) reader for the iPhone (and likewise, the iPod Touch)

So, it brings me great pleasure to present jComix! 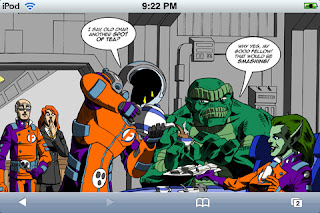 jComix is a CBR reader written in Ruby by a talented Australian named Jeremy. It has been specifically tailored to the browser in a iPhone/iTouch.

Features
Support for CBR/RAR archives (requires the unrar command line tool)
Detects JPEG, PNG and GIF images
Portable code (does not write to anything outside of its own folder)
Cross Platform

Now, I suspect not a lot of you reading this blog actually own an iPhone or iPod Touch because currently, they cost quite a bit for what they deliver. However I also suspect that within another year or two, they will be much cheaper and pretty much all the rage amongst the kids in the know. :)

And when that happens, the phrase, "Hey, Kids! Comics!" might just become popular again! :D
Posted by Jim Shelley at 8:39 AM

What about the iphone/ipod's brother ZUNE???

HAH! The zune doesnt even compare to the iTouch. Only thing to come close is the Archos. Anyways. Awesome I have been waiting for this day for a long time. I'm gonna download the app now. Thanks