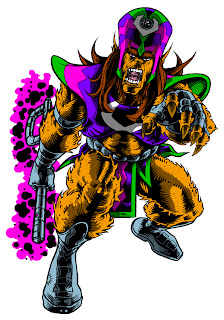 I recently bought the DC Archives of the Legion of Super Heroes volume 10, mainly because it was all of the Dave Cockrum issues.

One of the things that really struck me was how amazing it was that even though Dave only did about a years worth of stories, just how much influence he put on the legion after his run. Mike Grell was pretty much obligated to use the new costume designs, and as a result new costume designs (like Tyroc) sort of needed to blend in to the existing schemes set up by Dave Cockrum.

I think about this when I'm looking at new artists - can they adapt their style to fit with the *House Style* set up by Pierre? Most of them will say, "Sure!" but the real test is the amount of complexity Pierre puts in his work based on simple design concepts. Also, his use of color is very specific.

I'm happy to say that Jerry Hinds is one of the few artists I've encountered who actually understood what Pierre was doing and has been not only successful in matching it, but is also not afraid to push the parameters of the Flashback Universe look and feel. (Examine the picture above - Ultrax the Unconquered, from a story by Chris Sims - the style of color and costume design is pretty much Flashback Universe Perfection! Below is his rendition of a character called Baba Yaga.) 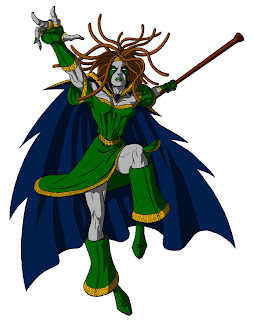 The other thing I like about Jerry is that just like Pierre, he really *gets* what cool about the Bronze age of comics. So many artists and writers like to praise the Bronze age with a wink, wink, nudge, nudge attitude that I just find insulting. They totally ignore the great things Starlin was doing with Warlock, or Gerber was doing with Man-thing. To them it's all about how *quaint* Bob Haney's Brave and the Bold was. (btw Bob Haney Rocked Hard!)

Jerry understands the reason those Bronze age comics were so great - he uses a word for it that has a very specific meaning in his e-mails: Gravity. Defined the way Jerry uses it, Gravity is that moment when Damocles looks up and sees the sword hanging over his head. Or when a salvage team in space realizes they have an alien stowaway. Or when two high school rivals realize they have superpowers as long as they as they agree to help each other.

It's how heavy the pages get as you flip through a comic, one by one, the plot tension building, giving each page more and more impact.

I expect Jerry will bring a lot of Gravity to the Flashback Universe! :)

Here are Jerry's answers to my Creator Survey:

What Flashback Universe comic did you work on, or are you currently scheduled to work on?

FLASHBACK TEAM UP: THE CREATURE AND WILDCARD

Do you have a link to a blog/portfolio you would like me to include?

What comics from the 70's did you like when you were growing up?

To see a few comics which maintain a visual 'comic feel' as opposed to many which display art that's 'too realistic', thus non-escaping (though technically excellent) in the way Golden & Silver Age comics are.