Revisiting The Wild Wild West: The Night of the Tycoons 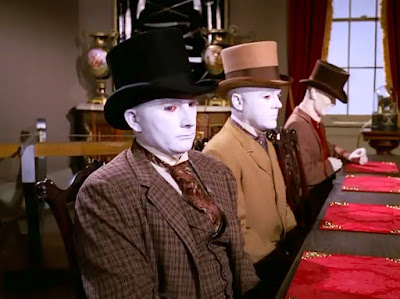 "The Night of the Tycoons"
Written by  Barney Slater (story) & Louis Vittes (teleplay)
Directed by Mike Moder
Synopsis: West investigates the suspicious deaths of members of the board of directors of the Jupiter Corporation with the help of the privileged son of one the former chairman.
Jim: Following the wisdom of Silver Age DC comics, this episode entices us us with an ape, specifically one in a Union soldier uniform!
Trey: "You Can't Pin A Medal on a Gorilla"....But I digress. This one definitely has the elements of a number of good episodes:  an elaborate plot, high concept goons, a simian throwing an explosive, but...
Jim: Let's not get to that final judgement so quickly! It is a weird episode in that its corporate intrigue plot is more fitting for a show like Mannix or Banacek. Even the chauvinistic comments by West would fit shows like that better.  Then there's scene with the circus seals goes on for quite a long time! Also, where is Artemus Gordon?
Trey: Yeah, I think this is the most sexist episode of WWW we've watched. It's not that our heroes have never made sexist comments before, but not this number and not in such a way it seemed almost an ethos.
As to Artemus, well this is an episode from before Martin's return. It was produced right before "TNOT Diva." But as to my final judgement...
Jim: Oh no! 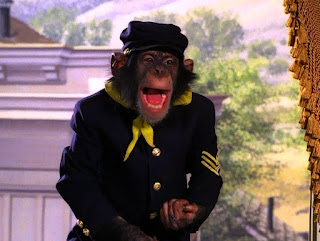 Trey: Here it comes! Despite its good qualities, the episode fails for sexism, but mostly because it lacked a strong or at least suitably eccentric main villain.
Jim:  Yep. I enjoyed the circus of crime and the crossbow death trap, but outside of that, this was a sadly lackluster finale for the series. Now, I'm wondering what would've been a good last episode? One final battle with Dr. Loveless perhaps?
Trey: Another appearance by Loveless would have been great. I think getting any recurrent villain like Valentine or Count Manzeppi would have been good, too. A team up, would have been awesome, but probably more than one could reasonably hope for.
Jim: And with that, our heroes rode into the sunset! 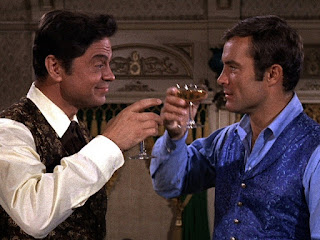