Revisiting the Wild Wild West: The Night of the Bogus Bandits 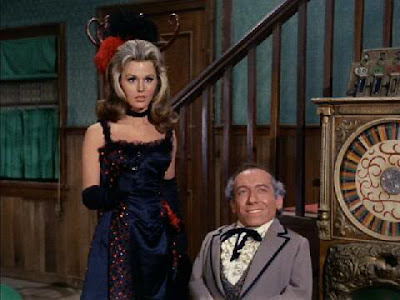 "The Night of the Bogus Bandit"
Written by Henry Sharp
Directed by Irving Moore
Synopsis: A string of bank robberies leads West and Gordon to Dr. Loveless who's running a training program for bandits with a goal beyond simple larceny.

Trey: And Season 2 goes out with a whimper not a bang.
Jim: Yeah, I'm not happy with the way the writers wrote Loveless this episode. He's less the Wizard Who Shook The Earth, and more just a dollar store megalomaniac. Michael Dunn, as always, is a joy to behold on the screen, but I feel like the writers sort of forgot how Dr. Loveless has been presented in past episodes. This specific role would have suited another character/actor better. I could see Frank "The Riddler" Gorshin killing it in this particular role.
Ross Martin is given a lot of solo screen time this episode, which makes up for the lackluster characterization of Dr. Loveless a little. 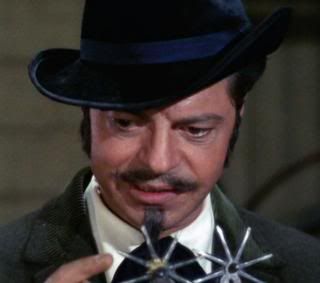 Trey: Agreed. I did think the "burnt $100 banknotes" was a nice bit of investigation. It beats West and Gordon being mostly reactive which happens a lot.
Jim: Yes, where this episode excels is in the way it manages to showcase the talents of both Conrad and Martin, more so than an average episode. Martin is allowed to go undercover and  sleuth it up, while Conrad is given a nice range of action scenes.
Another thing I liked: Loveless' solution to the problem of reckless gun owners looks pretty effective to me.
Trey: The "trick gun" gets a lot of play this episode. It really kind of lampshades some of the silliness of that sort of thing.
Jim: Speaking of silliness: Is it odd that Loveless is playing the role of stereotypical movie director in the 1870s?
Trey: ...And cut! That's a wrap on Season 2! Say goodnight, Jim.
Jim: Goodnight, Jim.
Posted by Trey at 7:00 AM