Revisiting the Wild Wild West: The Night of the Surreal McCoy 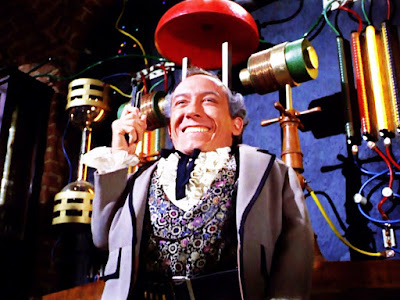 "The Night of the Surreal McCoy"
Written by John Kneubuhl
Directed by Alan Crosland, Jr.
Synopsis: When the famous Herzberg jewels are stolen from a locked room in a museum, West and Gordon become suspicious of a wealthy art collector who had a painting on loan to the museum in the same room. They soon discover the collector is in league with their old nemesis Dr. Loveless who has devised away to enter alternate dimensions in paintings.

Trey: Dr. Loveless returns and with him his creator and usual writer John Kneubeuhl. I feel like their last outing ("Green Death") was lackluster, but this is a good one. Crosland who directed "Gypsy Peril" and "Night of the Skull" most recently, again demonstrates a good sense of pacing and use of action.
This episode's more fantastical conceit made me not remember it fondly, but I think my feelings in this regard have shifted--and it's a bit more rationalized weirdness than I recalled.
Jim: It's interesting that the premise of this episode didn't appeal to you at one time. For me, it's quite the opposite, with this episode looming large in my memory. In fact, I believe this episode is largely responsible for my skewed idea of what makes the show work. Over the years, I've always thought of the show as being all about the "fantastic," but as our weekly reviews have shown, the truly weird episodes are the outliers.
Which is to say, it's a bit like expecting all Star Trek episodes to be like "The Trouble With Tribbles," or something.
I  like the "science" displayed here, as it reminds me of the sort of pseudoscience that would appear so often in the pulps and classic television shows.
Trey: Yeah, as I've mentioned before, when WWW does the fantastic, I want it to be implausible science, not the "supernatural."
Jim: This episode provides further evidence for my theory--
Trey: Your crackpot theory!
Jim: My theory that Loveless is more than he seems, and possibly immortal: first with a remark that he is beyond the grasp of death, (which seems true), and then a little later when he suggests he's spent half a decade learning the show necessary to devises and carryout his plan.
Trey: If that were true, you would think he would have learned to choose criminal co-conspirators better. It seems like he's always getting betrayed, but this time, at least, it's not by a young woman, lured away by West's good looks. 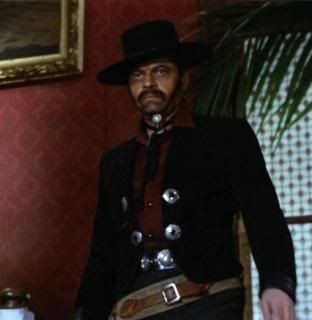 Jim: Well, true. It seems like that's a pretty essential element of a Loveless episode. Another essential element is the classic Artemus switch with Lightning McCoy, which  gives us our episode title.
Trey: It's funny that West is the only one who sees through his disguise. I get the feeling at times the show is ambivalent about how much a master of disguise Gordon really is. I mean, he often fools folks just playing a made up character, but it seems like he is frequently revealed when disguised as a specific person. Loveless doesn't even suspect him here.
Jim: A wide-brimmed hat and a fake mustache go a long way.
Posted by Trey at 7:15 AM