Revisiting the Wild Wild West: The Night of the Lord of Limbo 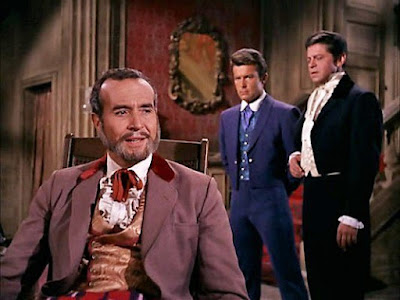 "The Night of the Lord of Limbo"
Written by Henry Sharp
Directed by Jesse Hibbs
Synopsis: When a stage magician makes Artemus really disappear, West's search for his missing partner leads him into a confrontation with a wheelchair-bound, former Confederate Captain, which a magical power and a score to settle.

Trey: Outside of the Manzeppi episodes (which get by with a figleaf of ambiguity and Victor Buono's performance), this may be my favorite "blatantly supernatural" episode of the series--and I think it handles the blatantly supernatural better than the Manzeppi episodes.
Jim: Well, that's a surprise! Why does this one get a pass?
Trey: It has a core, supernatural conceit that is explained in a reasonable enough fashion. It is almost more pseudo-scientific phenomena (or could easily be spun as such): "mental powers of the East!" Every instance of something supernatural happening in the episode easily falls under the provided explanation, and the events are considered highly unusual by the people that observe them.
Jim: Interesting! This episode was a mixed bag for me. Like a lot of my favorites, it had a villain who was had a "superpower." And as you point out, the explanation of how his powers worked were perfectly suited for the series, walking the line between the fantastic and science fictional, never pushing us too far into the realm of the magic.
Trey: But?
Jim: The actual use of this super-power is a bit lacking. While the wavering, dreamlike transistions between were okay, once we are in the other realm, it's basically just a set change. Part of that is because the main plot doesn't really demand much in the way of setting changes, just time changes. But we end up with a 'battle scene' set inside a mansion! I would have preferred them being transferred to an actual battle, but that was probably way outside the budget. Still, I think a little more imagination could have made this limbo world more interesting. Star Trek would have done better!
Trey: Fair enough. I certainly don't want to appear to be praising it unduly. I feel like it is only a better than average episode, taken as a whole. It lacks the gadgetry and humor that seem to be essential ingredients of the truly classic episodes.
Still, there are good fight scenes in this--and Montalban makes for a great villain. 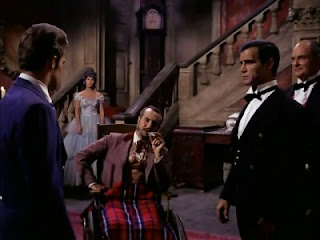 Jim: He is great. Another thing I like was the use of the unrepentant Confederates as the villains. I feel like the show works best when it leans on historical references.
Trey: Agreed.
Jim: The setup on this episode was good as well, with Artemis being gone for a good bit of the show, his return was actually a bit of a surprise to me.
Trey: If they could surprise a jaded classic tv viewer like yourself, they were on to something.
Posted by Trey at 7:00 AM