The other day I mentioned the Partridge Family 2200 AD cartoon to my wife who had never heard of it. It prompted a conversation about some of the really arcane cartoons that I remember from my childhood. How many of these do you remember? (All Synopsis text is from Wikipedia.) 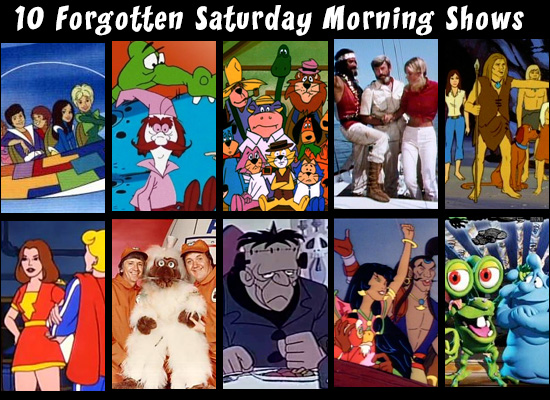 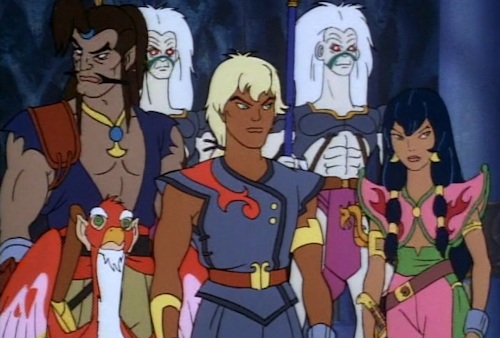 The alien world of Mer is being devoured by an evil substance known as Dark Water. Only Ren, a young prince, can stop it by finding the lost Thirteen Treasures of Rule. His loyal crew of misfits that help in his journey are an ecomancer (Tula), a monkey-bird (Niddler), and a treasure-hungry pirate (Ioz). The evil pirate lord, Bloth, will stop at nothing to get the treasures for himself and provides many obstacles for Ren and his crew. 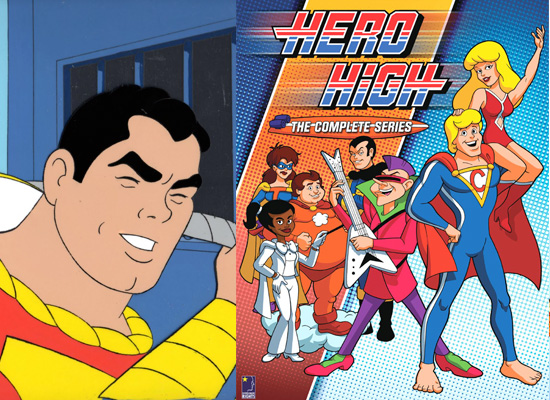 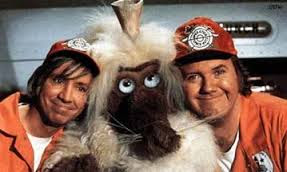 While loading food into various compartments to prepare a rocket for an upcoming mission, Barney (Chuck McCann) instructs Junior (Bob Denver) to hit the "lunch" button, but Junior mistakenly hits the "launch" button. The rocket blasts off and takes them on various misadventures on alien planets.

Things That Go Bump In The Night 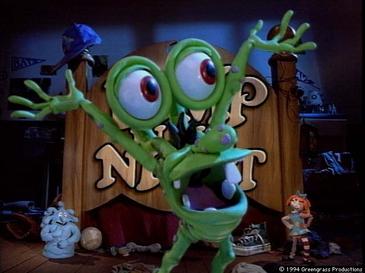 Mr. Bumpy is a small green, purple-warted monster living under the bed of a ten-year-old boy, where he eats dirty socks and dust bunnies as if they were delicacies. His best friends are Squishington, a blue monster that lived in the bathroom's toilet tank; and Molly Coddle, a Frankenstein's monster-like rag doll belonging to the boy's sister who acts as the straight man to the other's crazy antics.
Other characters include Destructo, the boy's toy robot who sees himself as a cop and persecutes Mr. Bumpy for his actions. There's also the Closet Monster, who's made up of the boy's pile of clothes and chases after Mr. Bumpy. 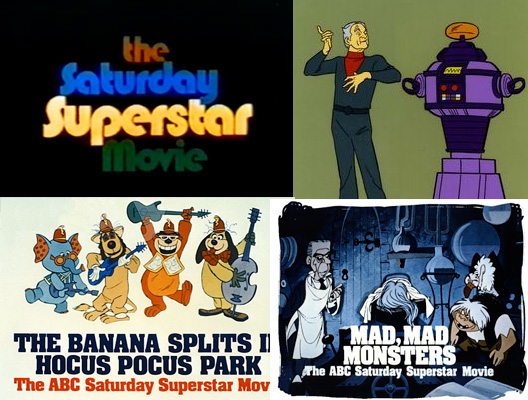 Intended as a "Movie of the Week" for kids, this series was produced by several production companies — including Hanna-Barbera, Filmation, and Rankin/Bass — and mostly contained features based on popular cartoon characters and TV shows of the time, such as Yogi Bear, The Brady Bunch, and Lost in Space. Some of the features served as pilots for new TV shows.

Valley of the Dinosaurs 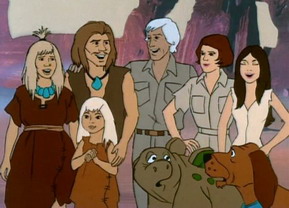 Science teacher John Butler along with his wife Kim, their two children, Greg and Katie, and their dog, Digger, are on a rafting trip on the Amazon River. As they are going down the river, their boat hits a rock and capsizes. The family then gets caught in a whirlpool. When they surface upon going through an underground cavern, they find themselves in a prehistoric valley where they meet caveman Gorok, his wife Gara, their two children Lok and Tana, and their pet, a baby Stegosaurus named Glump. The two families soon become friends and Gorok and his family help the Butlers in their many attempts to find a way to return home while trying to survive in the valley. 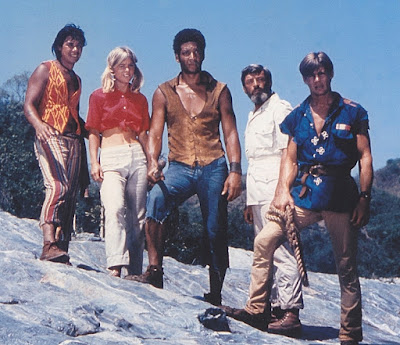 Intended as a live-action version of the animated Hanna-Barbera series Jonny Quest, Danger Island depicted the adventures of a trio of explorers in an unnamed tropical island group: Prof. Irwin Hayden, an archaeologist; Lincoln "Link" Simmons, the professor's youthful assistant; and Leslie, the professor's daughter, who serves as both a love interest for Link and the series' token damsel-in-distress.

Several years earlier, the professor's brother (also an archaeologist) disappeared in the same island chain while searching for the mythical lost city of Tobanya. They are joined on their quest by Morgan, a shipwrecked merchant mariner, and his teenage sidekick Chongo, who speaks only in a series of monkey-like chatters and birdcalls. They are pursued by a group of bumbling but heavily armed modern-day pirates led by the murderous Captain Mu-Tan, and by three tribes of cannibalistic natives known as "the Headhunters", "the Skeleton Men" and "the Ash Men". The show spawned the popular  catchphrase "Uh-oh, Chongo!" among children of that time. 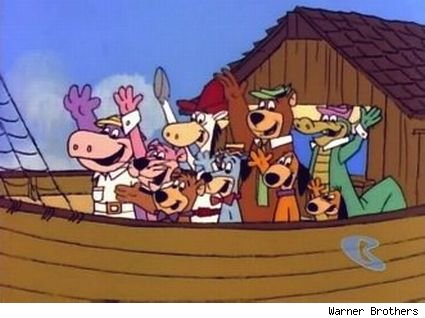 Yogi's Gang is a 30-minute Saturday morning animated series and the second incarnation of Hanna-Barbera's Yogi Bear series which aired 16 half-hour episodes on ABC from September 8, 1973, to December 29, 1973. The show began as Yogi's Ark Lark, a special TV movie on The ABC Saturday Superstar Movie in 1972. Fifteen original episodes were produced for broadcast on ABC, with the hour-long Yogi's Ark Lark thrown in as a split-in-half two-parter.

After a successful run on Saturday mornings, episodes of Yogi's Gang were serialized on the syndicated weekday series, Fred Flintstone and Friends in 1977–78. In the late 1980s, repeats were shown on USA Cartoon Express and later resurfaced on Nickelodeon, Cartoon Network and Boomerang. 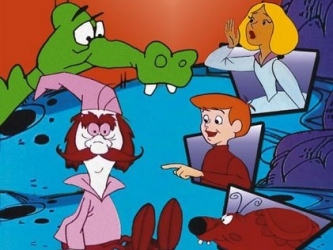 The main character was a small, grumpy wizard who put a spell of melancholy on the kingdom of the Princess Dawn. The Princess and her friend Terry Dexter (a boy from the "real" world) searched for the Cave of the Whispering Orchids to find a crystal key to break the spell, while the Grump tried to stop them. In each episode the Grump flew a dragon named Dingo, chasing Terry and Princess Dawn. This led them to bizarre places with strange characters, such as the Blabbermouth of Echo Island, where the mountains were made of living Swiss cheese.

The Princess had a pet named Bip — a vaguely doglike creature with tentacular legs, that sniffed clues like a hound dog, turned around by pulling in its tail and head and popping them back out at opposite ends, and communicated in the sounds of a soprano bugle. In most episodes, the Princess and her friends traveled in a flying car supported by a big balloon. 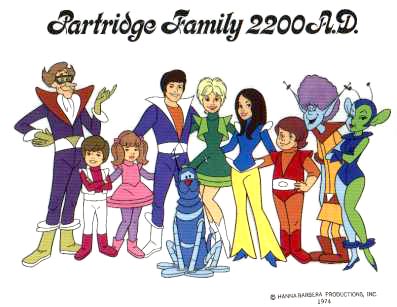 This series saw the Partridge Family propelled 225 years into the future, with no explanation as to why or how. The series featured new characters Veenie (Keith's Venusian friend) and Marion (Laurie's Martian friend). Danny had a pet robot dog named Orbit. The group's matriarch was now Connie Partridge (the name originally used for the live-action series' 1969 pilot) and voiced by Joan Gerber. (During a February 2, 2008 New York radio interview with Mark Simone on WABC's Saturday Night Oldies show, Shirley Jones, who played mother Shirley Partridge on the live-action series, apparently was never even told of the show's existence and had no recollection of any animated version of the series ever being produced.)

In addition to Jones's absence, David Cassidy (Keith Partridge) and Dave Madden (manager Reuben Kincaid) did not voice their animated counterparts; both parts were recast. Susan Dey provided Laurie's voice for only two episodes before she was replaced by former Mouseketeer Sherry Alberoni. Danny Bonaduce, Suzanne Crough and Brian Forster voiced their respective characters from the live action series.

Sixteen half-hour episodes were produced for Partridge Family 2200 A.D., which lasted half a season on CBS Saturday morning (September 7, 1974 – March 8, 1975). In 1977–78, it was re-titled The Partridge Family in Outer Space when episodes were serialized on the syndicated weekday series Fred Flintstone and Friends. Like many animated series created by Hanna-Barbera in the 1970s, the show contained an inferior laugh track created by the studio.

That wraps up my Ten Forgotten Saturday Morning Cartoons.
What cartoons do you think I should have added?

I remember all of those but the Grump and Saturday Superstars, though so (like the Partridge family) I saw in syndication on USA rather than in their original airing.

I would add Galtar to your list. It's probably more obscure than Pirates of Darkwater or Yogi's Ark.

I had never heard of Galtar, but reading up on the cartoon, I agree, it definitely deserves to be on the list. I may do a follow up article as I've gotten a couple of emails with similar recommendations.

All of these shows and cartoons were very famous and kids were waiting for it always anyway it reminds me my school life when i have won paper writers shield in my school and i want to see more posts here.