This weekend was a very animated themed one for me as I was able to catch up on some cartoon movies/shows I had missed recently. Here's what I saw: 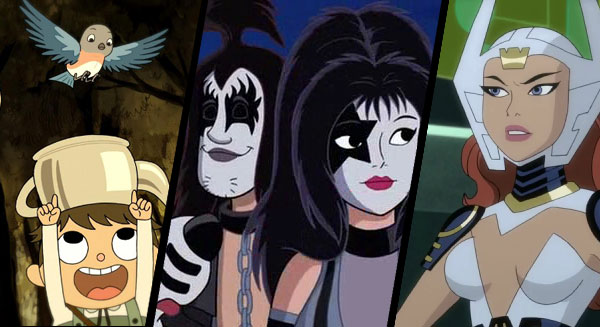 Friday night, I had the good fortune of watching Over The Garden Wall with my friend and sometimes FBU contributor, Trey Causey. 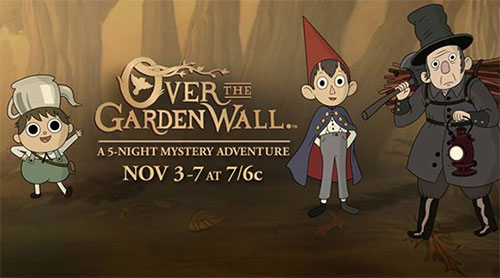 I had never heard of this  10 episode Cartoon Network series (it is fairly new) but I was given the choice of watching it or the new DC direct to video feature Justice League: Gods and Monsters. I don't quite recall what it was that Trey said that convinced me to give Over The Garden Wall (OTGW) a try, but I would describe the series as a beautiful mash up of the old Merrie Melodies cartoons with a Southern Gothic mystery.

The main story focuses on two boys Wirt and his younger brother Greg who are lost in a mysterious woods. As they try to find a way home, they encounter a number of creepy scenarios, that evoke the works of Edgar Allan Poe, Nathaniel Hawthorne and Mark Twain. The animation is breathtaking and the music perfectly captures the old Merrie Melodies feel.

Currently the only way to watch the series is on DVD, and while I don't buy many DVDs these days, this is one I could see buying. I just watched it Friday, but I already want to see it again.

Later in the weekend, I decided I also wanted to give Justice League: Gods & Monsters a try, so I rented it from Amazon. 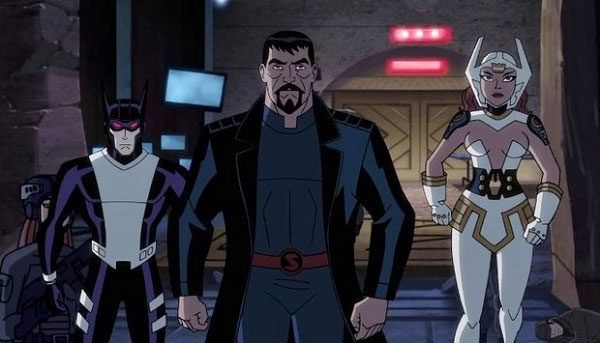 If you missed out on the hubbub of this movie when it came out last July (as I did), here's a quick synopsis from Wikipedia:

In an alternate universe, the Justice League is a brutal force that maintains order on Earth. This universe has its own versions of Superman, Batman, and Wonder Woman:


I can say without a doubt, that my Friday choice of Over the Garden Wall, was the best decision. Gods & Monsters wasn't bad as these sort of things go, but the very nature of the movie (introducing 3 new characters complete with the backstories) didn't give the writers Bruce Timm and Alan Burnett a lot of room to build much more than a conventional (and somewhat predictable) plot. I found myself bored in a lot of places which led me to wonder what exactly was the purpose of this movie. This is what, the third? the fourth? animated version of a darker DC Universe, so it's hard not to get a been there/done that vibe from the movie.


Overall, this strikes me as a movie for only the most ardent DC Universe fans. It's definitely not something you would spring on someone just getting into comics...or an old school fan who might not enjoy their super-heroics with so much neck-snapping and sword gouging.

Watching it, I wondered how the DC Direct To Video movies were doing. You may recall I did a post two years ago examining the track record of the DC DTV features wherein I notice a downward trend. Well, here's what the trend looks like now: 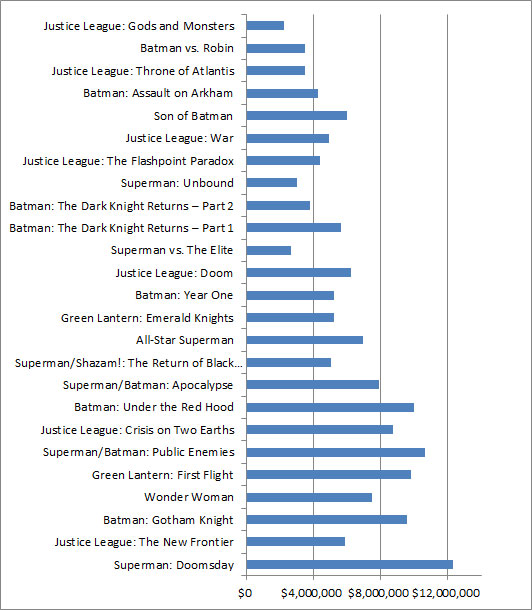 At the time of my first analysis, I thought that Justice League: The Flashpoint Paradox would do as good as Justice League: Doom (I was wrong about that. Only Son of Batman has come close to matching Justice League: Doom.) As it is, the home media sales are continuing to drop off pretty steeply. Part of that could be a lot of people simply watch the movies on home streaming services like Amazon (or Netflix eventually) as I did. It's also possible that comic fans simply don't feel compelled to buy these movies when they first come out as they did years ago.

Whatever the reason, I don't see us getting a Legion of Super-heroes DTV feature anytime soon. :(

Anyway, the last animated movie I saw this weekend was Scooby Doo and Kiss" Rock and Roll Mystery. 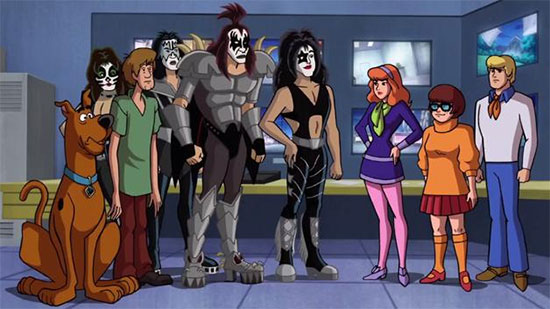 Before I go into my review, let me say, I'm a big Scooby Doo fan with a LOT of thoughts about the show. As such, I'm working on big article for a future post. But for today, I'm going to try and restrain myself and just focus on this lone feature.

This is another movie I was on the fence about watching. Yes, I like Scooby Doo. Yes, I was a big Kiss fan back in the day. So, you would think I'd be all over this thing, right? Not so much. Part of me viewed it with the same suspicion I had for the old Scooby Doo Movies. (Yeah, it was cool when Batman and Robin showed up, but the one with Cass Elliot was sort of hard to sit through.) 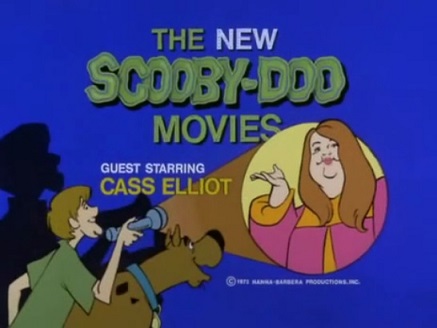 As it turns out, this movie sort of encompasses that whole good/bad experience. Parts are funny and play it pretty straight with the whole Scooby Doo formula (which is a good thing in this case.) There are some nice bits with Daphne having a crush on Paul Stanley that totally remind me of the 1970's Scooby Doo movies. And the voice acting is good if not a bit strange. Where else are you going to find Darius Rucker (of Hootie and the Blowfish) in the same movie as Kevin Smith and Jason Mewes (Jay and Silent Bob.)

What really brings the movie down is the parts where the movie wants to delve into the Kiss as Superheroes idea that was started with Kiss Meets The Phantom of the Park and the old Marvel Magazines. That aspect is okay at first, but the movie builds on it until it overwhelms the story. And what they ultimately do with the idea is sort of disappointing as well.

Overall, of the recent Scooby Doo animated efforts, I still prefer the two season Scooby Doo! Mystery Incorporated series which came out in 2010.

Anyway, next week is my anniversary, so I will be taking next weekend off with no new post. Have a great week!

Glad you liked Over the Garden Wall. It is really good. You can watch it on Amazon Video, too.

I would agree with you largely that Gods & Monsters is mostly for DC fans, though I think that's really true of most of their animated efforts--and this is one of the better ones in some time.

@Trey, I'm not as down on the G&M feature as it might sound. I actually think that direction/take is what they should have done for the entire DC comic universe instead of the half hearted "some things change, some things don't" direction they took when they rebooted everything for the DC 52.

Yet another darkness=quality production from DC? No thanks.