Welcome to a weeklong feature here on Flashback celebrating Friday's release of The Avengers: Age of Ultron.  In honor of Ultron's cinematic debut, we reached out to the entire Flashback family of contributors — Jim Shelley, Scott Simmons, Trey Causey, Stevie B!, Caine Dorr, and Ed Love — asking for suggestions on their favorite robots in the comics.  We then compiled a master list and divvied up votes among the dozens of contenders.  When the basic math settled, we were left with two dozen plus one of the greatest robots to ever appear in the pages of comic books.  (We were actually going for a top ten list, but — well, there were too many 'bots we had things to say about to stop there.)  So grab a coffee and settle in as we count them down, five a day, all this week. 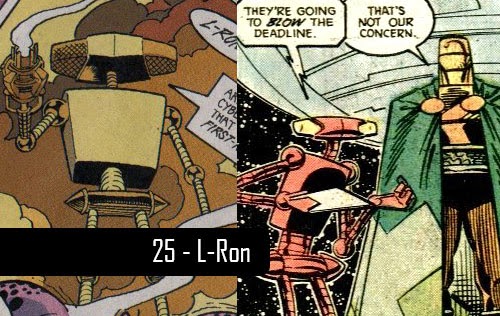 Kicking off our robot countdown is an unlikely hero from the pages of Justice League International — L-Ron, the group's reluctant majordomo. When he first appeared, L-Ron was one of an assortment of comically named robotic assistants to armored intergalactic confidence man Manga Khan. While Hein-9 and K-Dikk had brief moments to shine, L-Ron stole the show in his scenes, lavishing outrageous praise on Manga Khan in fear of winding up on the scrap heap if he didn't keep the master's operation running smoothly. When Khan made a return to JLI later in the run, he traded a rebuilt L-Ron to the League in return for Despero, who'd been devolved into an developed fetus. (That happens a lot in super-hero comics.) For a while, L-Ron busied himself serving the League as dutifully as he had his old master, much to their annoyance. When a restored Despero returned to menace the team again in "Breakdowns," heralding the end of the J. M. DeMatteis/Keith Giffen era, L-Ron saved the day by swapping minds with the hulking villain, leaving Despero trapped in L-Ron's spindly robot body — which was promptly mistaken for a duck by a hunter and shot to pieces.

In Despero's body, L-Ron went on to become properly extreme, picking up some guns and a bandolier as he went on to star in Justice League Task Force, the 1990s secret strike team of the Justice League. He returned, inexplicably back in his old robot body and serving Max Lord in the capacity he'd once served Manga Khan, in Formerly Known as the Justice League. Shortly afterward, he returned once again, this time (equally inexplicably) bent on wiping out mankind as a member of the Robot Renegades in Duncan Rouleau's late-'00s Metal Men mini-series.

How come L-Ron's been so many different things in his many appearances? Jim may have hit on it the other day when he compared him to Woodstock from Peanuts — and not just because they're both small and yellow. L-Ron began as a joke, his name a play on science-fiction writer (and Scientology founder) L. Ron Hubbard and his personality a spoof of ingratiating robot (and non-robot) majordomos going back at least as far as the fool in King Lear. Like Woodstock, he's pretty much an empty vessel onto which comedic situations can be layered. Snoopy has a personality; so do the various Justice League members. The primary personality trait of both Woodstock and L-Ron is that they're game for following the comedic lead of their partners. When Justice League got sober and serious in "Breakdowns," L-Ron got the memo and saved the day heroically. When the '90s got extreme, he got a gun and a bandolier. And when nostalgia came blazing back, so did L-Ron — in his original, lovable robot form from the '80s. 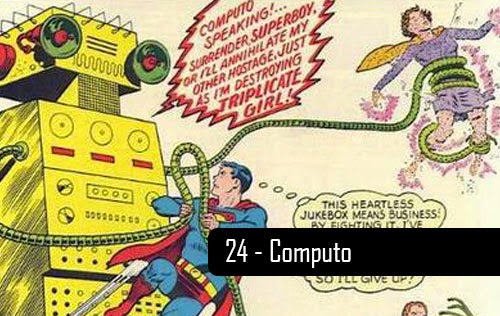 Preceding Ultron by many years, Computo is the first of the “created by a hero (Brainac 5) but then becomes an artificially intelligent albatross” character. A random purchase at Charlotte Comic Con, the second part of Computo’s premiere was my first encounter with the Legion of Superheroes - What a mind-sploder it was! First, my young brain had to process so many new heroes – the Legion roster seemed endless! Second,  I was stupified when one of Triplicate Girls triplets is killed (?!) in the story, the rocket her body to a graveyard with other dead superheroes! (What Tom Foolery! My 9 year old mind reeled at this idea. What type of comic book was I reading where heroes died so regularly?)

The answer it turns out was: A damn good one. I became a rabid LoSH reader after reading this issue. (Though the issues I would pick up after reading 341 were Bronze Age issues and the new costumes made it difficult to recognize everybody…)

Unfortunately for me, after causing so much chaos in that story, it would be decades later (during the Giffen/Levitz era) before I would see Computo again. After that, Computo has some minor appearances in the Post Crisis Legion universe, but often it’s as a functionary character. His only appearance in the DC New 52 is in name only.

To this day, one question remains for me: Why was Computo so forgotten and unused during the Bronze age? (He never shows up during the Grell/Cockrum era). Was it the fact that he killed Triplicate Girl such a turn off for fans that fan/creators didn’t want to use him? 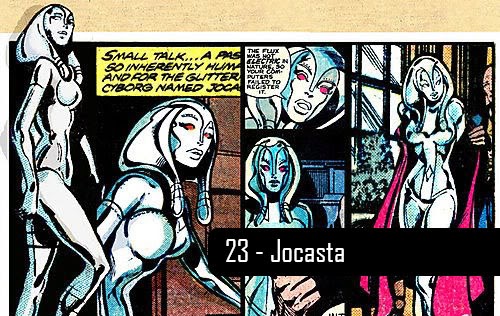 The only female robot to make our list, Jocasta is (unfortunately) most notable for her insecurity and for getting killed. She first appeared as the creation of the villainous robot Ultron. Seeking the ultimate Oedipal vengeance on his human creator, his "father" Hank Pym, Ultron crafted his own robot and set about programming her with the brain patterns of Pym's then-wife Janet, also known as the Wasp. The process was intended to kill Jan, leaving Ultron with a freshly minted bride and his father a widower. Hence her name: Jocasta, the mother of Oedipus who went on to become his wife. 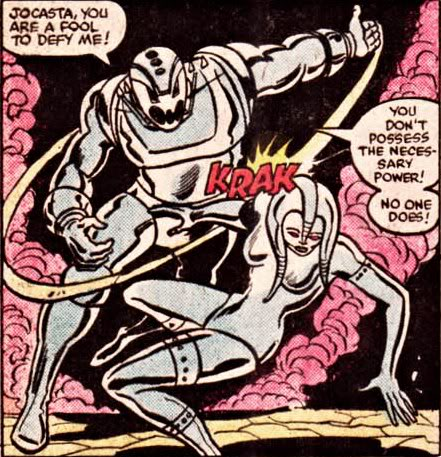 And that's just the beginning of Jocasta's lurid take on femininity down through the years. The Avengers manage to save Jan in Jocasta's first appearance, and her grandfather Hank ends up taking her home to his basement to examine and attempt to fix her — putting her at the center of Hank's soon-to-deteriorate marriage. When Hank does reactivate her, she and the Avengers discover she's programmed to rebuild Ultron. This sets a predictable pattern for her subsequent appearances: Jocasta is reactivated/repaired, agonizes over her worth and her place among humans, pines over a (usually robotic) crush, falls into an irresistible compulsion to rebuild Ultron, and is ultimately destroyed, usually taking her creator-husband (or some other villain) down with her.

It's a compelling tale, and one I've enjoyed more than once through the years — her two-part team-up with Machine Man and the Thing in Marvel Two-in-One #92-93 (October-November 1982) was my first exposure to Ultron — but there's something fatalistic about its repetition. More than tragic, Jocasta often comes across as pathetic — a perpetual victim, the battered wife in an epically dysfunctional family who can never escape her circumstances. She's literally got bad programming in her head that keeps her coming back to her tormentor every time she gets close to a successful relationship with someone else, usually to find herself beaten to death at his hands.

Mix in her "sexy robot" design, and you have a character who is perpetually an object of desire, always unattainable, and tinged with the danger of the ultimate unhinged ex to whom she's always devoted. As much drama as this has generated over the years, it's hard not to long for a permanent escape on Jocasta's behalf — at least something more permanent than the revolving door of comic-book deaths she endures every time she's shuffled out of the Avengers line-up. Maybe it's that empathy for her that makes her so compelling and brings us back to the well for her tragic end every time. 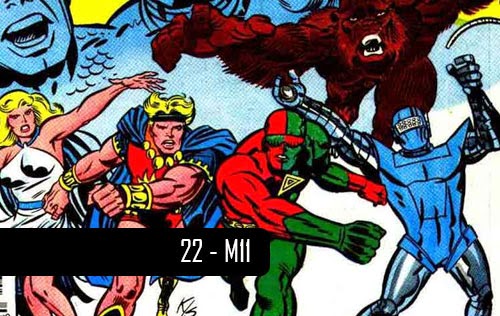 The Golden Age origin of M-11 has our hero going on a robot killing spree that would have made Bronze Age Ultron cringe.
However infamous this appearance was, Roy Thomas saw something worthwhile in the character and inspired writer Don Glut to revived him (and several other older Atlas heroes) in the pages of What If...? 9. While there are a lot of great stories in that original What If...? run, this one stands out because as it turns out, it wasn’t really an alternate universe, but rather an unrevealed story from Marvel’s history.

Thomas most likely revived M-11 as a way to provide an appropriate analogue for The Vision (as the story suggests at the end.)

Decades later (2006), writer Jeff Parker would reintroduce modern readers to these characters in his excellent mini-series, The Golden History. Parker does a wonderful job bringing the characters into the modern era without totally undermining their original concepts. (Unlike, for instance, J. Michael Straczynski’s The Twelve.)

Based on the success of Parker’s original mini, the Agents of Atlas returned in several other mini-series, but ultimately, they got lost in the noise of events and modern reader apathy in anything that’s not Avengers or Batman.

NOTE: If you have not ever read the original Parker AoA mini-series, I _highly_ recommend getting the hardcover edition as it not only reprints the original What If...? #9 story, but also includes the Golden Age appearances of the characters. 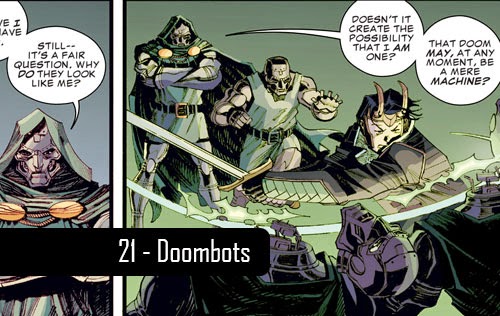 The thing about robots, as you'll see throughout our countdown, is sometimes there's more than one of them.

When Doctor Doom makes his first appearance in FF #5, he evades capture at the end of the story in a twist readers couldn't have seen coming: He was never there in the first place! The "Dr. Doom" in that story turns out to be a highly sophisticated robot of the real Doom's design. Doom himself has been pulling the strings from a distance, staying safely outside the reach of his enemies. Doom's stand-ins, dubbed "Doombots," became recurring fixtures after that, even showing up in his early cartoon appearances. 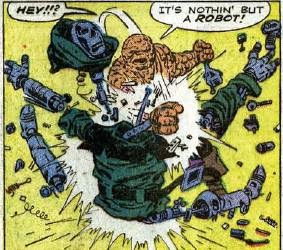 In the mid-'80s, however, John Byrne let a genie out of the bottle when he realized the passive-aggressive narrative power of the Doombots. Relatively fresh off an acrimonious break-up with Chris Claremont and The Uncanny X-Men, Byrne was writing and drawing Fantastic Four, making him the ultimate authority on all things Dr. Doom, when Claremont used Doom in a three-part story in X-Men #145-147 (May-July 1981). In it, Doom pursues Storm romantically and tolerates the usual disrespectful shenanigans from pinball-themed hitman Arcade, most notably Arcade striking a match on Doom's armor. Two years later, in Fantastic Four #258 (September 1983), Byrne had Doom himself destroy a Doombot for allowing Arcade to treat it with such indignity — and so was born the writerly tradition of defanging Dr. Doom appearances by retconning them into Doombot appearances.

Walt Simonson took this to the next level in Fantastic Four #350 (March 1991) by introducing a new version of Doom claiming to be the original who insists that most of his appearances through the years have been Doombots! In the years since, writers have used Doombots as slams against runs they don't care for, quick patches over bits of continuity they want to ignore, and even a mechanism for elevating Doom's reputation. If Doom does anything less than impressive, it may be the work of a mere Doombot.

Curiously, the reverse could also be true: Doom's robots may be waging the successful campaigns, and Doom himself may be the one prone to emotional outbursts and "out of character" moments leading to his defeat.

In any case, one thing is certain: As long as comic-book writers have human pride and favorite stories, the Doombots will always return. 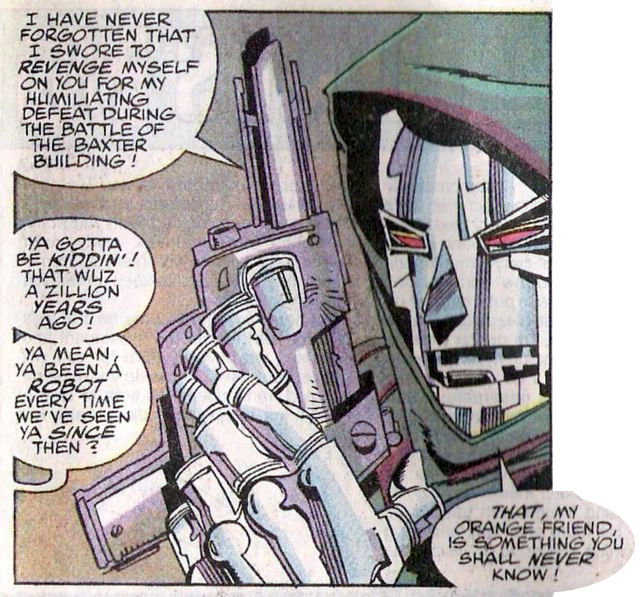