July 30th will see the release of the latest DC Direct to Disc Animated feature: Justice League: The Flashpoint Paradox. This movie is based off of the recent DC event written by Geoff Johns in which the Flash finds himself in an alternate timeline having to unravel a mystery with the help of some familiar, but different, friends. 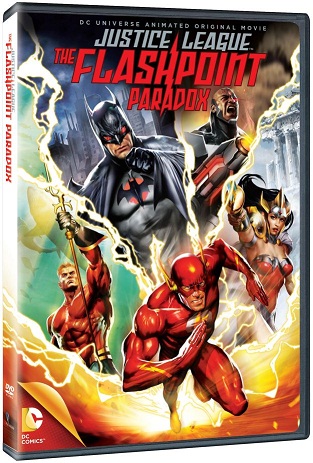 I've known about this movie for a while (whereas other DC animations tend to catch me by surprise) and I'm looking forward to this one. The storyline has a jaunty pacing and a certain Elseworlds/What If feel about it that I think will lend itself well to a movie adaptation (whereas some of the DC animated features feel a bit long to me.)

Thinking about the buzz I've seen on this movie on the internet got me to wondering how is the DCU Animated series doing sales wise. Since the sales numbers are readily available from various sources, I was able to whip up a graph of my findings showing units sold for each feature: 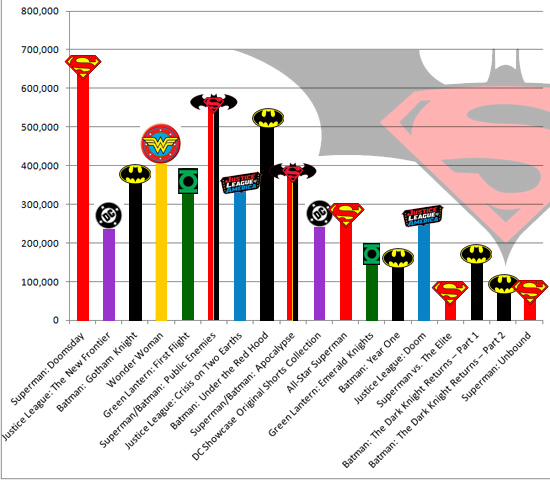 Some thoughts:
The first thing that jumped out at me was it looks like the features are rapidly declining in popularity - aside from a few upticks (Justice League: Doom, Batman: The Dark Knight Returns Part 1)


Why has there not been another Wonder Woman movie? The first one actually outsold the first Batman, Green Lantern and Justice League movies, so you would think it would be a no brainer to produce another one.

Why did New Frontier sell so poorly? Was because it wasn't more directly marketed as a Justice League movie? (It seems to be titled as such, but I can't remember how it appeared in places like Best Buy when it was released.) 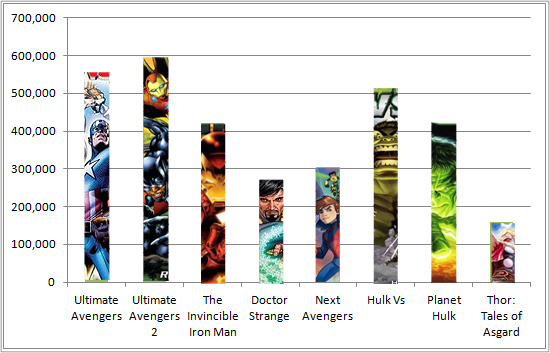 Here are the dollar figures for DC:

Looking at the last number on both charts, I have to wonder if Thor: Tales of Asgard or Superman: Unbound broke even. I enjoyed a lot of the movies on both lists, but I perfectly understand why the Marvel line petered out based on the sales of T:ToA.

I think the Flashpoint Paradox is going to do a good bit better than Superman: Unbound. I would beg it for at least as good as Justice League: Doom ($4 million).

After that, I have heard that the plans are to adapt the first arc of the Geoff Johns/Jim Lee  Justice League. As that is fresh in the mind of readers at the moment, it might do pretty well too.

After that, I don't know what would sale well. Sinestro Corps Wars perhaps?

What would you like to see as the next comic book animated feature?

At one point DC's animated projects were a welcome alternative to all the BS going on with the comics. Now not so much.

I'm not really interested in seeing cartoon adaptations of comics I've read, give me a new adventure tailored for the new medium, but with characters I recognize. Other than as a novelty, I just don't see the draw of doing "New Frontier" or "Dark Knight Returns" in animation. And, definitely not interested if it was stories I barely liked or couldn't work up enthusiasm to read to start with. Let's face it, unlike novels, if I can make the time to pay for and watch an animated movie, I can probably afford and have the time to read the original comic book! A little different than investing the time and effort to reading "The Count of Monte Cristo" to watching the movie.

I love the animated features. Like many others, I grew up on Batman: The Animated Series. And the recent Dark Knight Returns movies, were brilliant adaptations. I wonder how much of this is tempered by declining dvd sales in general?

I live in Australia, and saw the first two marvel movies and the number of the early dc films casually. Whereas I haven't seen a dvd copy of any of these in years! Everything has had to be downloaded, and then only in bulk because I had to search them out.
Would the declining sales be then due to lower maket penetration?

Matt - I feel the same way you do. That the are going to start adapting new 52 era material feels like a step backwards to me.

Cash you nake a good point about the difference in time investments viv a vis comics and movies - I think one of the best examples of an original dc animation was the first JL movie with the Crime Syndicate.

Jon I think you are right about lower market penetration. Also people waiting for newer titles to show up on Netflix - which the do quite rapidly now

@Jim - yeah I forgot about the netflix effect on dvd sales, as we do not have access to it her in Australia.

I think it will be fairly safe to assume that flashpoint paradox will be a very small seller, since it has already leaked and is available on bittorrent sites. The hardcore fans that would normally pay for it, probably have it already.

I am impressed. nice article...