Continuing my series of Lost 100 Pager Super Spectaculars from the 70's, I present this edition featuring the Archie Goodwin, Walt Simonson version of Paul Kirk, Manhunter. 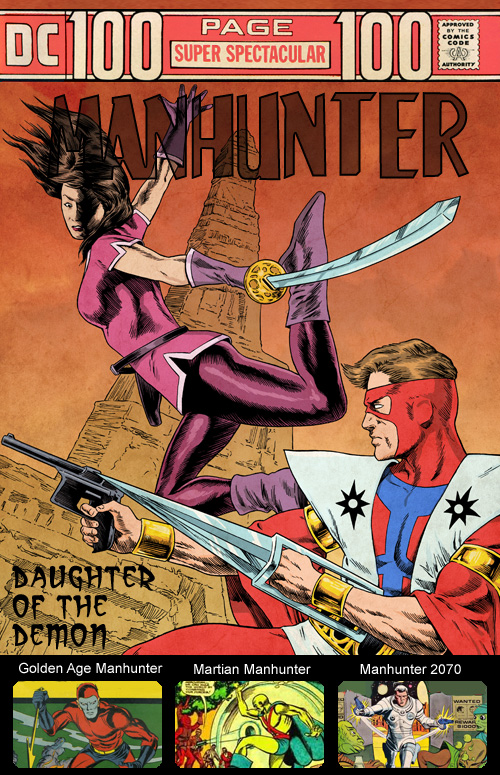 The main artwork was created by the incredibly talented Jan "Reno" Maniquis, a name some regular visitors may recognize as Reno is a longstanding commenter on the FBU. In order to get the illustration to fit in my 100 Pager format, I had to crop it in such a way that some of the cool details Reno provided are missing, so below, I present the uncropped version for everyone to enjoy. (Click to enlarge) 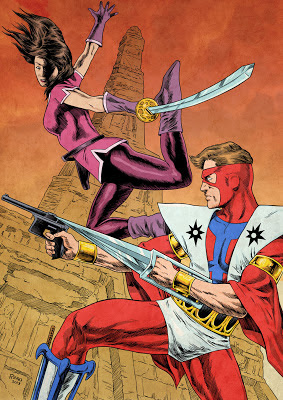 You can check out more of Reno's art at his website: http://capsulezone.wordpress.com/

As we were working on this art, Reno picked the Irv Novick version of Talia's costume to use for this illustration - a costume I only vaguely remembered. I tend to think of Talia as always dressed as she was on the cover of Detective 444 (another 100 Pager). I think Reno's choice was the better selection as purple costume has a more Eastern flair. 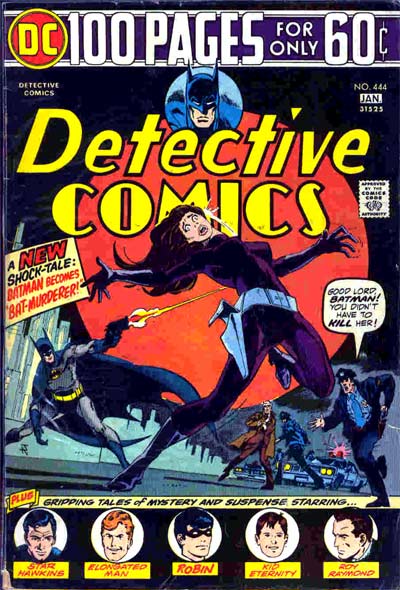 As to why I chose Paul Kirk, Manhunter for a 100 pager - I must admit to wanting to read more of his adventures. I've talked about my love for that series before, but it's far better that he remain dead. I don't think the current editorial climate at DC is quite the right place for a comic like the old Archie Goodwin, Walt Simonson Manhunter.

On the flipside, I will say that Dynamite's current The Shadow series has done a good job of capturing some of the old Bronze Age Manhunter feel. While the artwork is not as exciting as Simonson's, the exotic locales and intrigue often remind of what I enjoyed so much in the old Manhunter stories.


Feel free to post a suggestion for another Lost 100 Pager in the comments section!

For Talia's costume, I didn't want to go with the usual catsuit costume we see her in. I kinda remembered some sort of eastern looking outfit she wore, and found it in "The Lazarus Affair" storyline (I think it was Marv Wolfman's story). The only change I made was to remove the high heels.

Loved drawing Manhunter. That costume, though impractical, is crazy cool.