Flasback Five on the Relaunched Flash

Today Matt gives his thoughts on why he likes the relaunched Flash!
Anyone who knows my writing on the blog has a pretty good idea that I do not have a lot of love left for what currently passes for DC Comics, which I usually refer to as Didio Comics. For all the hype and praises of the relaunch I have remained unimpressed. However, now I'm actually glad to say that I have found at least two notable exceptions to what has so far seemed to be for the most part little more than yet another round of eye-rolling attempts at being "edgy". These comics have stood out to me because these first issues did NOT do that. What I feel they did instead was to present a cool superhero character doing awesome things with some good looking art held together with a solid story to make you curious what happens next issue. Unlike so many others in the line they feel more like superhero comics. Not horror movies. Not thinly veiled porn. Not "reality" TV. Not a storyboard pitch for the movie.

So I'm breaking the actual "flashback" part of FB5 just this once to give you five things I liked about The Flash no.1!


I have to admit that when it comes to the Flash I'm more of a Wally West guy. But that is not at the expense of Barry Allen or any kind of real disdain for him. But I did enjoy that he got to die a hero in an ultimate heroic act and that we were following a character who was inheriting that mantle from him, both living the promise and shouldering the burden of what it meant to bear the name. But I think I can say that with the new Flash no.1 even if you don't consider yourself a Barry Allen fan this is just might be a good time to give the guy another chance even if you miss Wally.

1. Francis Manapul. I'm going to go out on a limb and say that Manapul might be one of the best artists to fit the character since the late Mike Weringo.

That might seem like an odd choice given the watercolor look to his art but there's an energy to his pages that I feel captures the feel of speed and draws you into the Flash's world. I think he even manages to make the Jim Lee redesign of the costume work. Granted the bulk of the changes are basically the requisite gratuitous seams, raised emblem, and chinder-wear (you MST3K fans know what I mean by that). Kind of makes me wonder how the rest of the heroes would have looked if the changes had been reeled in to just touch ups and tweaks. I do like that Manapul makes the seams glow and become one with the speed effects coming off his lighting bolt and trim.

2. The title page. There's a cool retro vibe to this that I really love. 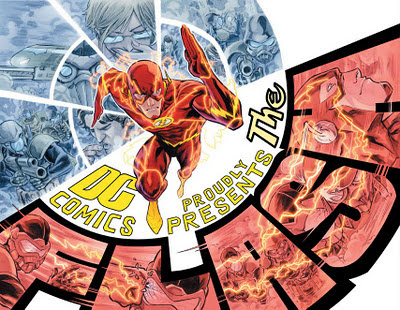 The Flash's running pose is awesome and I love how the text and images are bursting out around him. A really nice piece of graphic design that kicks the issue off well. I think it would make a great poster!
3. The suiting-up page. You know, I've never actually enjoyed the whole thing of the Flash costume coming out of a ring.

Having it be a ring just played a little too close to Green Lantern for me plus I just kind of thought the wrinkly suit wobbling out of it looked a bit too silly. However, one of the things that I love in superheroes is the idea of transformation. Whether it's something as simple as Clark Kent's shirt-rip or the awesome henshin effects of Japanese superheroes like Kamen Rider, I love those moments where the seemingly ordinary person summons, puts-on, or reveals their extraordinary form. Their hero form. The series of panels where Barry suits-up is that kind of moment and it rocks!

4. The story. While the story is not the Earth-shattering event of the century I thought it was a solid start that does a great job of establishing who Barry Allen is without even losing the pace of the book. You're brought into Barry's everyday life and then he's thrown in into his latest case all the while the issue showcases The Flash in action and ending on a cliffhanger that makes you want to find out what happens next but at the same time the issue is a solid unit unto itself. It doesn't feel like the first ten minutes of a movie that you're being told you have to come back next month to see the next 10 minutes of.

5. The colors. One of the many things that puts me off a lot of current books is the constant use of muted color schemes. Whether it's toning the costume colors way down or having the story exist in this endless sea of greys and browns, or every daytime scene feeling like it's happening at sunset. In other words, I like seeing superhero comic books that aren't ashamed of vibrant colors. I feel the coloring for this issue conveyed the intent of the story being told while still having enough pop to them to fit a superhero comic.

Next Time: Grab your scuba gear because we're diving into the second part of this 52 review: Aquaman no.1!

This issue felt like it really got the relaunch/reboot part correctly. A great jumping on place for new readers. I've heard many podcasters who are not big DC fans say the same thing.

I also like that we will get to see the Iris/Barry relationship develop over time. It gives us another/different type of story to follow here in addition to the usual superheroics.