Editor's Note: Today, FBU is pleased to bring you an interesting find.  Trey Causey brought to my attention a magazine article that appears to be from the Marvel Universe itself…
In 1961, to all appearances, the Soviet Union was winning the space race.  After a string of firsts, Yuri Gagarin officially became the first human in space on April 12.  The next month, NASA, playing catch-up, would launch Alan Sheppard on a suborbital flight.  Sheppard would be proclaimed as the first American in space. 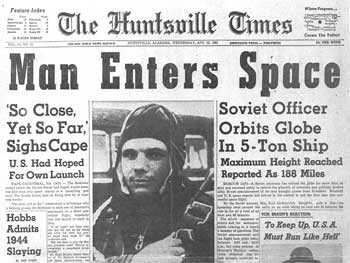 The official story is wrong.  What is not widely known is that the first Americans in space were civilians, flying an unauthorized test of an experimental spacecraft designed to take humans to Mars before the end of the decade.  What’s more, their flight pre-dated Gagarin’s by months.  This was a secret part of America’s space program—the strange twin to the more conventional and image-conscious Apollo program.  It was an attempt not only to beat the Communists but also to send a message to the alien species that had taken an interest in the Earth over the past decade.

These pioneers would become publicly lauded heroes but of a different sort.  Their strange adventures are widely celebrated, though not always believed.   Their true contributions to history would be publicized predominantly in the pages of a comic book.

This is the true story of how it began: the real story of America’s first space flight and the heroes it created.

“MAYBE WE OUGHTA DO SOME SUPERHEROES”
In May of 1961 (as the story goes), Jack Liebowitz, publisher of DC Comics, had a golf game with Martin Goodman, his counterpart at Atlas (soon to be Marvel) Comics.  Liebowitz bragged about the success of the Justice League of America, a comic book presenting the exploits of fictional superheroes (Or so it was widely believed.  Gardner Fox, and eventually Julius Schwartz knew better).  The Justice League was part of a string of titles DC had that exploited the renewed interest in superheroes.

Goodman’s company, like most comic book companies, had no superhero-theme titles at the time.  Superheroes had fallen out of favor in the early 1950s at the height of the Cold War.  The anti-superhero climate had lead to congressional hearings on the subversive influence on America’s youth of superhero comics themselves, instigated by Dr. Frederic Wertham. 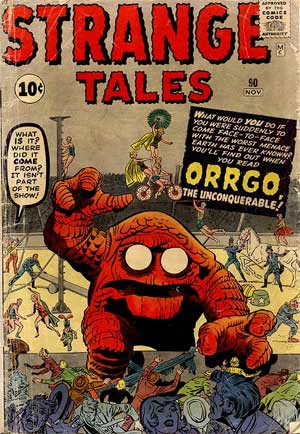 What Goodman’s company specialized in was schlocky horror tales of monsters and aliens.  Some of these were based on news reports or rumors.  Others were completely fictional.  Almost all exaggerated the size and destructive nature of the unusual creatures involved.  The company had westerns and romance comics as well, but all of these added up to only moderate commercial success.

When Leibowitz told Goodman the sales figures on his first two issues of the Justice League, Goodman decided superheroes might be just what his company needed.  At the soonest opportunity, Goodman summoned his cousin-in-law and comic book editor-in-chief, Stan Lee, to his office and told him: “maybe we oughta do some superheroes.”

Lee’s first attempt rushed into print the fictionalized exploits of a sorcerer and monster-fighter he called “Dr. Droom.”  This unlikely nom de guerre was necessary to help fictionalize the adventures of Dr. Anthony Ludgate Druid, whose permission Lee had not obtained before using his likeness.  Lee reportedly got what real information he had on Dr. Druid from an eavesdropping employee of the exclusive club where Druid and the other self-styled “Monster Hunters” met.  Never particularly popular, the Dr. Droom series came to an end around the time Lee introduced the world to the group that would form the nucleus of the nascent Marvel Comics empire.

A newspaper article from Los Angeles would suggest to Lee a superhero comic to rival the Justice League.  The now-famous photo shows a group of four non-costumed but obviously superhuman individuals in action against a monster, bursting up through the street.  A striking image to be sure—but what particularly got Lee’s attention was that one of these superhumans was a flying man with a body of flame.  A human torch. 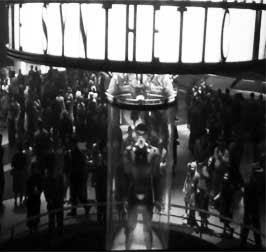 The adventures of the original Human Torch had been published by Goodman’s company (then called Timely).  Goodman had, at the time, paid an honorarium to Phineas Horton for inside information on (and the rights to) stories about his creation.

Goodman still held the rights to the name since the original bearer had disappeared, and in any case, was an android with unclear legal standing.  Lee decided “The Human Torch” was the perfect name for this new superhuman—and with that idea, he had a plan.  Lee called a journalist contact he had in California to see what he could find out about these new heroes.

It only took a couple of days for Lee to find out the identities of some of the people in the picture.  The man with the stretching powers was well-known, at least in scientific circles.  He was Reed Richards.  The monster-man wasn’t easy to recognize, but the reporter told a Lee that this was Benjamin Grimm, former test pilot. 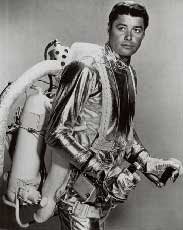 Lee was shocked.  He had heard of both these men!  Richards he had read about in magazines.  Ben Grimm he had heard about from a sometime Atlas employee—one who had actually met the man.

Jack Kirby, who would become the artist for Lee’s new comic, had grown up in Manhattan’s Lower East Side.  At a high school party, Kirby had met another Jewish kid from the neighborhood—a football star named Ben Grimm.  Though the two had only a chance meeting, but Kirby had followed Grimm’s football exploits at State U, and his wartime adventures in the South Pacific through the neighborhood grapevine.

Lee and Kirby managed to get in touch with Grimm, and through him Richards, and the Storm siblings.  Lee proposed a deal to help the new heroes and his comic company.  The Four would be paid for the use of their likenesses and exploits in what would be billed as “The World’s Only 100% Authorized Comics Magazine.”  Lee, with his gift for alliteration, even came up with a title—the Fantastic Four.

The association with Lee and Kirby may have benefited the newly minted superhumans in ways beyond the financial.  Perhaps it was the writer Lee, or maybe it was Kirby who had worked on the strangely parallel Challengers of the Unknown for the competition, who proposed that the four become a superhero team.  It certainly seems likely that the duo suggested the idea of costumes and codenames—as the quartet’s costumeless debut suggests.

There was just one problem.  The four had experienced some major financial difficulties in the first months of their career (the recession of 1960-61).  Casting about for funding, they had just signed a deal with S-M Studios to make a documentary film about their exploits.  This contract had turned over all media rights to S-M.

In a twist worthy of a Lee/Kirby yarn, S-M was owned by Namor, the Sub-Mariner.  Though Namor was an enemy of the four, perhaps he was more positively disposed towards Atlas, the successor to Timely, publisher of fictionalized accounts of Namor’s War World II exploits.  Whatever his motivations, Namor signalled his subordinates that they could make a deal with Lee.  The Fantastic Four was coming to comics.
NEXT WEEK: The Real Four…
Posted by Jim Shelley at 5:56 AM

I'm slightly offended on Yuri Gagarin's behalf. He was the one who rolled the dice on an untested vehicle that was supposed to do what nothing made by humans had ever done before. He died in 1968 testing a slightly more conventional aircraft, famously displaying enormous courage and calm as he tried to get it back under control. I see no need to diminish a real-life hero for the sake of a story element.
If I were writing such an essay, I would have placed the Flight of the Four in the period between Gagarin's flight and Shepard's.