Most of my entries for the Collected Comics Wishlist are serious suggestions which I think would actually stand a chance of getting collected and might actually sell pretty well. This one not so much...for today, I put forth the burning question: Where is a collection that brings us all the great stories featuring Darkoth, The Death Demon? 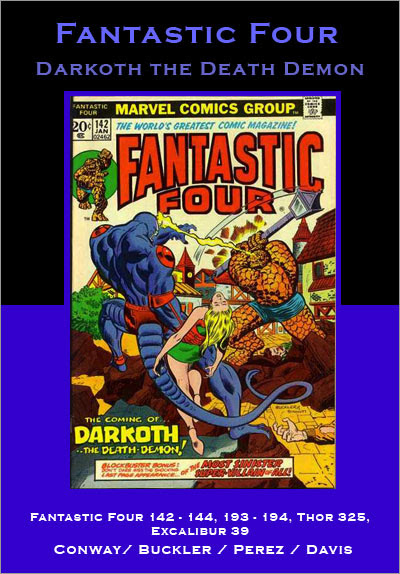 Now if you are unfamiliar with Darkoth, don't feel bad. I think the only people who really remember this character are me and Pierre. To me the character has always sort of typilified the sort of interesting creativitity that was going on during the bronze age. He's a man who was turned into a demonic creature by Doctor Doom via some amalgamation of science and magic (which is why he looks like a demon, but has those trademarked Rich Buckler shoulder bolts)

When I first saw the character, I instantly assumed he'd become another recurring character in the FF mythos like, say, the Inhumans, however, that's not how it played out. After his initial appearance, he shows up one last time (drawn by George Perez) and then doesn't show back up in the FF ever again. Outside of that, we see him only 3 more times in the Marvel Universe. His last appearance was in Excalibur 39 (which I don't have a cover scan for) 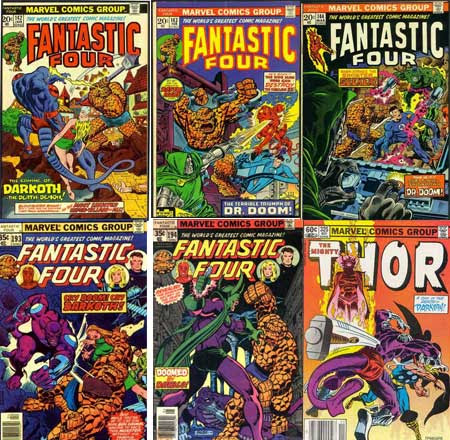 Since the Excalibur issue, he's been completely forgotten. While I could see Jonathan Hickman resurrecting the character for his run on the Fantastic Four, I don't know that I would hold my breath waiting. Now, he's the sort of character you bring up to get a smile out of Erik Larsen at conventions. (Larsen loves the bronze age probably more than me.)

Speaking of Erik Larsen, that brings up another Collected Comics Wishlist entry, but this one is more serious. Why has Marvel never collected the Worlds Greatest Comics Magazine mini-series that Erik Larsen and Eric Stephenson worked on?

This was a fun series that was designed to sort of be an imaginary wrap up of the Kirby/Lee run on the Fantastic Four with art and story that fits perfectly for the time period. Am I mistaken in thinking it's never been collected? Maybe the timing was just wrong. It's not old enough to be fondly remembered by fans today and it's not new enough that it was automatically collected into a trade (like current runs.) It's also an awkward size (12 issues) whereas current trades clock in around 6 issues.

Still, hasn't Avengers Forever been collected several different ways? That was 12 issues and came out at about the same time.

I guess I have another question for Erik Larsen at next year's HeroesCon. :D

Jim, I love your collected comics wishlists. I only wish the publishers would actually listen to you.

Thank you Matt! I love making the covers too, so this series has been a blast for me. I just sometimes have a hard time coming up with new runs to collect.

Ha! I actually really dig Darkoth and, at one point, made a concerted effort to track down all of his appearances. (Obviously, though, that didn't take all that long, especially since I already had those FF books!) I didn't care much for that Excalibur appearance, though; it didn't seem to mesh well with what had already been established. I mean, technically, yeah, there were no real issues with regards to continuity or anything, but it didn't seem to fit the character IMO.