Justifying the cost of an iPad 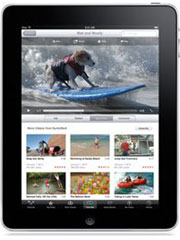 The virtual tremors began at the start of the iPad's world-changing debut, shortly after 10 a.m. PST. Twitter was already at a crawl by that point, with users complaining of missing and long-delayed tweets. Thus far, Twitter has only acknowledged the existence of the problem and said it is "investigating the source...

...And it wasn't just tech sites suffering: Some Internet service providers, such as the UK's Level1 Internet Services, told customers all the iPad attention was putting pretty much the entire Internet in a chokehold. ~ PC World

And for good reason - this is a device a lot of people are excited about. It looks to have the portability of a netbook combined with the ease of use and wide assortment of cool apps of an iPod or iPhone. It also looks like it will be crazy fun to use.

Strangely, there seems to be a large percentage of comic fans who aren't that interested in the device. Over at The Beat, where Heidi has reposted some pics of the device and the prices, the news is met with a lot of grumbling about the price. Over at Bleeding Cool, there is a more even mix of pro and con commenters, but the main sticking point still seems to be the price.

Now, excluding all the other things you can do with this device, how exactly does a comic fan justify the cost of a $500 gadget to read comics? Well, cheaper comics is the answer.

However on comiXology and Robot Comics, comics are priced in the .99 to $1.99 range.
So, imagine saving $2.00 on every comic you buy.
And this doesn't factor in gas savings of going to the comic shop.
Or the Huge amount of FREE comics offered by the many distributors.

So, at $2.00 a pop, you would only have to buy 250 comics before you broke even on the device.
After that, you are actually saving money on every comic you buy.

That sounds pretty simple to me. :)
Posted by Jim Shelley at 7:37 AM

I think it looks great. Can't say it'll completely stop me buying paper comics and books but I'll happily move over a big amount of my reading over to this. Do I 'need' it? Of course not but since when do I have to justify a luxury item like this?

I might wait for Gen2 or Gen3 to pick it up. By then Longbox and DC and everyone else will be on board and it'll be easier to segue into it all. Also, Adobe should have their Flash issues cleaned up so that Marvel's Digital Comics Unlimited will run on it. This looks mighty exciting...!