No this time it won't be Jim entertaining you but Pierre.

But for this first blog, let me introduce myself and tell you a little bit about me.

As far as I can remember, I have always wanted to be a comic book artist.

As early as 4 or 5 years old, I would fold in two whatever pieces of paper that I could find and would draw tiny 4 pages comic books. My inspiration at the time was some collectable cards featuring Batman. I would take a card, and make a 4 pages comic based on that card.

Sadly growing up.... no one I knew even had a single clue as to how someone could become a comic book artist (or even just an artist). So I had to find out the hard way... and it was a bumpy ride.

First copying poses I liked, then panels, then entire pages. 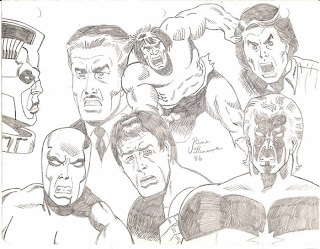 Then I got my first published drawing. A pin-up of Nova. You can compare it to a more recent drawing of Nova that I did for the "30th anniversary of Nova magazine". 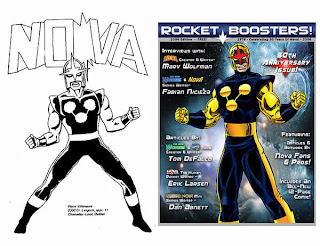 After high school, I still had no idea on what to do to become a comic book artist. All I could think of was to mail some samples to various comic companies, which got me my first rejection letters. So I went to college in Arts, then Graphic Arts, and finally Illustration and Design.

After doing various crappy gigs (posters and business cards), I got my foot in 2D animation. I worked on many TV series (Arthur, Marsupilami, Bob Morane to name just a few) for various animation studios and even a feature film (Heavy Metal 2000, AKA Heavy Metal FAKK 2).

Although not being comic book work, working in animation is still for the most part fun. And I learned a lot in animation that can be applied to doing comics. The coloring style used for Flashback Universe for example pretty much comes from my experience in animation.

Then between some animation gigs, I started dawing comic book pages for various independent publishers. Sadly I quickly discovered that it does not take much for a project (or an independent publisher) to go down the drain. So not much of what I did actually saw print.

Until at some point I met a crazy "buckaroo" called Jim. And you guys can see the result on the Flashback Universe site. ;) 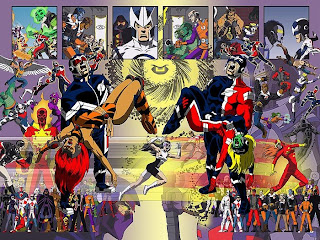 So how does one become a comic book artist?? Did I finally solve the riddle that has been plaguing me since I was a kid?

I will share with you the secret that has eluded me for so long.

One becomes a comic book artist...

Pierre, I like your work. The clean lines offer an exciting visual while not taking away from the story.

I love the FB Crisis image.

"As far as I can remember, I have always wanted to be a comic book artist."

So the whole thing about you being a gangster was just made up by Hollywood? I knew it!

RAB; You can't believe anything from hollywood. ;)

Love your stuff (especially that NOVA images) - keep it up!