Revisiting the Wild Wild West: The Night of the Gruesome Games 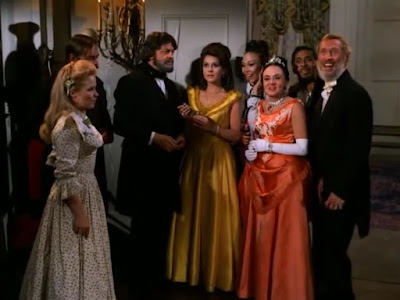 "The Night of the Gruesome Games"

Synopsis: Racing the clock to recover a stolen vial of deadly germs, West and Gordon stumble upon a party hosted by an eccentric millionaire Rufus Krause who delights in playing dangerous--and potentially lethal--parlor games.

Jim: This episode starts off quite well, with the highlights for me being the missiles Dr. Raker set up to ambush West, and how Artermis riled up the yokels with his rabble rousing talk. However once Dr. Raker takes a dive into the river, I found myself perplexed by the path the story took from there!

Trey: This feels like a Season 1 story done in the S4 style--or maybe a mashup of two S1 stories! I don't feel like the ticking time bomb bacterial container isn't as well-integrated into the story of the party and the vicious games as it might be.

Jim: Yes, the bacterial threat does seem unnecessary given how the rest of the episode plays out. There are a number of other ways West and Gordon could have found themselves invited to Krause's manor. I will say, in defense of this specific plot element, that it provides time pressure for our heroes to work against. It's possible that was added in a second draft of the script or changed at some point, which is why it feels awkward.

Trey: They try to tie things in by making the hidden villains the source of the deadly games, but it's not explained why the old man doesn't care that some people have died. It seems quite a coincidence that these folks were invited to the party of an old man who played dangerous games and was indifferent to murder.

Jim: Well, at one point Krause says he often gives into his baser desires, so maybe murder isn’t that high up on his list of offenses. Long time television staple William Schallet makes a good Rufus Krause, even if he does constantly remind me of Dick Van Dyke's Mr. Dawes Senior from Mary Poppins.

Trey: Sherry Jackson (Lola Cortez) is always welcome, but there doesn't seem much point to her being here. She fades in and out as the "girl of week" being with our heroes in some endeavors but often just being one of the crowd of victims--or suspects. 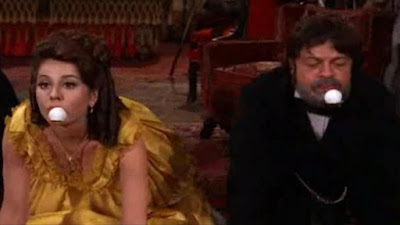 Jim: You are so right about Jackson's minimal role in this episode. Her intermittent use gives me more reason to wonder about rewrites on this episode. Part of it plays like And Then They Were None. If that was the original direction, I could see how her character might have had more purpose.

The music in this episode seems to fit better than in some of the previous episodes we've watched this season. Even when it sort of deviates from the standard fare, as with the cue at the first break, it still sounds more appropriate for the show than the modern sounding scores we heard so far.

Trey: Did you note the stereotypical Asian Henchman's name  was No Fun? Very Bondian pun, that.

Jim: Yes, No Fun's name also gave me a chuckle. It's definitely a Bondian style pun, but I also wonder if it's a possible tip of the hat to another CBS villain, Hawaii Five-0's Wo Fat.

Trey: That’s the fifth time you’ve brought up Hawaii 5-0 when discussing this series. How much is CBS paying you to promote it?