While I don't often recommend/review comics on this blog, I read one last night that I think a lot of readers of this blog would love for several reasons: Star Trek: New Vision #1 The Mirror Cracked by John Byrne 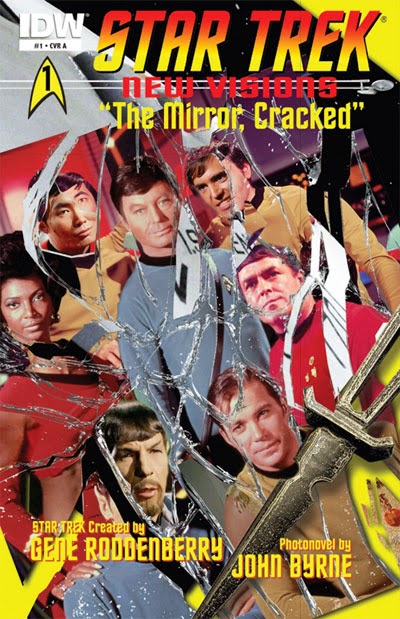 While I'm a big Star Trek TOS fan, I've only been lukewarm on the comic adaptations I've tried. There have been one or two I've enjoyed, but more often than not, I find the comic book adaptations read more like a slow hard science fiction novel instead of a jaunty hour long adventure show. Also, sometimes the artwork suffers (unfairly) by comparison to the television version which can be distracting.

However, legendary comic creator and Star Trek fan John Byrne has started creating new ST comics in a fashion that seems to solves the art problem completely with stories that have the fun pacing of the television show. In what must be a painstaking process, he is taking images (video captures) from the old shows and Photoshopping them into comic panels. Like this: By doing this, he creates a comic where the characters look exactly like the actors AND has the feel of a comic book (instead of a fumetti which I've always disliked.) The panel by panel feel gives you the pacing and camera angles you expect from a television show.

The Mirror Cracked is actually the second Byrne PhotoNovel. The first one came out late last year and featured a return to the Where No Man Has Gone Before storyline. 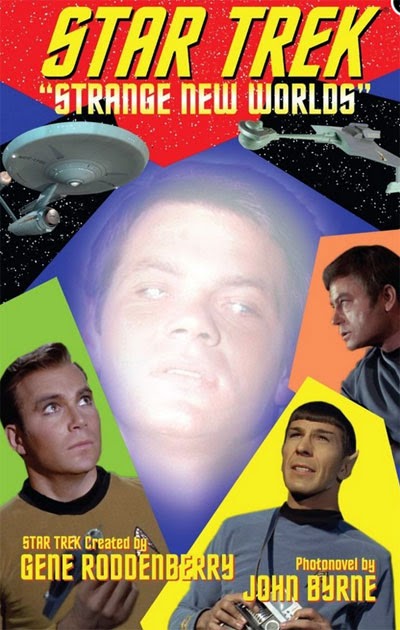 And while the technique impressed me with that annual, the story didn't quite grabbed me. Still, I was quite taken with the potential of the format, so I was very eager to read The Mirror Cracked when it came out this week. I don't want to give too much away, but this issue gives us another look at the Mirror, Mirror universe as Bearded Spock must journey to our universe to stop an alliance between evil Kirk and a Klingon Commander named Kor.

As you read the comic, it's hard not to be impressed with the effort Byrne has put into the artwork. I think I read somewhere that it actually takes him MORE time to do a comic this way than to draw it.  What you might not notice is what a fine job he's done with the story and dialogue. Every character sounds pitch perfect and the story moves at a fast clip with several plot twists. The last page even had a vibe like the ending of Trouble of Tribbles which put a nice smile on my face.

I highly recommend this comic if you are a fan of the old show!

Interesting. I'll have to check this out.

I wonder what comic adaptations you've been reading of ST, because I haven't read one that's like a slow, hard, sci-fi novel. In fact, I would say most of the comics are less science fictiony and more fantastic than the show: Exhibit A and B/

If you like the photonovel idea back in the late seventies or early eighties Bantam Books put out a series of Trek Fotonovels. The paperbacks were not original stories - they were adaptations of episodes such as "Where No Man Has Gone Before" or "City on the Edge of Forever" - and are surprisingly easy to run across in used bookstores, at least around here.

Though I would be willing to bet that given Mr. Byrne's talent, love for Trek, and other factors, that his new series puts the old Fotonovels to shame.