Is Zuda the Devil? 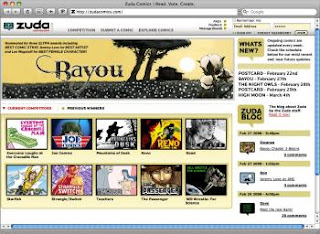 Over at ComicsWorthReading Johanna Draper Carlson has this to say about Zuda:

I thought I’d stop by and check out this month’s Zuda entries, which made me wonder about how similar they were all becoming. I noticed that many of them were tagged either Super-Hero, Action/Adventure, or Horror. There were smart-alec animals, girls in their underwear, bloody fights, talky conspiracies, and always, too much time spent waiting for the viewer to load. The content reminded me of what I can already get elsewhere.
Now, on the surface, this statement is perfectly fine and true, as there ARE many comics at Zuda tagged in the ways she describes. But I think she's done Zuda a disservice by implying that those are the only type of comics you will find on the site.
I actually think that on any given month, you can find a wide range of comics in the contest. And several have been picked by either the judges, or *gasp!* the viewers as winners.
And to me, this is the real problem with some of peoples disdain for the Zuda system - outside of where you stand on the whole Flash as a Web Comic Viewer issue, the second biggest issue I see people bring up about Zuda is that they hate the idea that the unwashed masses have a hand in picking the winner. That strikes me as a bit elitist.
To people who at odds about the nature of the contest, I would say: I understand that you are upset that your Michael Chabon wannabe friend from the coffee bar with his web comic about quirky customers got beat by a vampire comic by some guys from *horrors!* outside of Soho, but dems the breaks, you know? If your friend is really upset, he can return the $500 Zuda gave him for his entry. :D
Look around - Books, movies, TV shows, and web comics are all market driven. To say that - as one person on the comments section said - that All comic book fans are idiots, really says more about you and less about comic fans.

At the moment, Zuda is probably the most egalitarian system out there - that actually pays money. If Ms. Carlson (or other people) are upset about what comics have gotten picked, then might I suggest you find one of the entries that lost and sponsor it on your site, like I did with Mister Crimson? :)

So, to sum up:
Is Zuda the devil? No.
Does the Flash Viewer suck? That's for you to decide.
Will we be overcome by horrible web comics picked by ignorant Superhero loving groundlings? Unlikely.
I suspect Zuda will continue to surprise us each month, just has it has done so far, and I think that's cool.
Have a great weekend,
- Jim
Posted by Jim Shelley at 6:53 AM

What's your policy on profanity Jim? Because some of those ******* comments at comicsworthreading are un-******* believable!
I didn't care for a lot of the comics this month -just check my reviews already done and forth coming. I found two real gems to me as a reader though. I enjoyed I.C.E. realism/idealism a lot, and even if you didn't like it, it's not 'typical' comic stuff. I also stand by my view on Bloody Pulp: "Twilight Zone, Road to Perdition, and Bird all put into a blender for one smooth read." that comic is the very definition of original. I'm tired of zombie-esque stories too, but it's the nature of the contest you need to sample a wide variety of entries. Part of the fun for me is finding comics i really like. Their are only some many genre's that exist, so why go after the way comics are tagged??? I don't agree with the voting masses at Zuda very often, but i think some people have a bigger problem with the realization their not representative of the majority in comics readership than I do.
*******************************
A modest online comics proposal: Lets just divide the internet into Zuda comics and non-Zuda comics with no considerations of individual stories and be done with it.
***************************
For the record: I don't care about Penny Arcade, PVP, or whatever the hot 'web' comic is these days either.

I think you're exactly right. I don't always vote for the comic that wins, but I can't think of a single winner on Zuda that isn't well written with good art.

About the viewer - I don't know why so many people have problems with it, but I use the Google Chrome browser and never have a problem with it.

I think the whole thing people miss when just breezing through zuda is that beyond the flash player and opinions regarding "what fits in what genre", is that Zuda is a very tight-knit and supportive community. Everyone wants everyone else to be successful (even competitors within the competitions).

My comic (Panda Force, March 09) didn't win -- hell, didn't even break out of the 10th place... but I still felt supported, and still to this day feel like I'm a part of something bigger than just "did I win the contract, or not". Also I dare anyone to go look at my comic and claim it's part of the normal fare.

All the creators are accessible, and some even go out of their way TO STILL help me promote my comic -- which still has life after Zuda.

I have nothing but great things to say about the site and staff, and for all it's flaws I feel it offers the most to people like myself who feel they should have a voice in the comic world.

I wonder if there is so much hate for Zuda just because not everyone can get in? If you think about other web comics or drunk duck, you can put a dot on a piece of paper, upload it and BAM, you got a comic. But not Zuda. As many comics as Zuda has to reject every month, think of all the animosity that is being directed at them. My next Zuda submission I will make sure to put in the 'different' category.

@RKB - my feelings on profanity are it's useful in times of stress or comedy, so feel free to vent! :D

I think you are totally right about the whole Zuda vs Non-Zuda internet. It's sad, but there don't seem to be a lot of Shades of Gray when it comes to Zuda.

@Shan Lee - I've been relunctant to mess with Chrome, but I may try it based on your recommedation. Thank you!

@Walter Ostlie - I totally agree! It's sort of demeaning for someone like Draper to imply that all Zuda is a bunch of Superhero Fan Wanky (or whatever she envisions Zuda as being) when it's really a nice validation of your efforts and art!

Wow, this post has more comments than most. Way to go Jim you struck a nerve (not that it would be difficult with the subject matter and your blog's audience).

In one sense, I kinda would have liked to get an answer on what Zuda really is looking for (I even commented on that #40).

I realize though, that the answer is: It's different every hour of every day depending on the activity of the viewers who come to the site.

P.S. I have ZERO problems with the flash player using FF and 90% of the time I really enjoy CHROME (just some sites still don't work real well inside it)