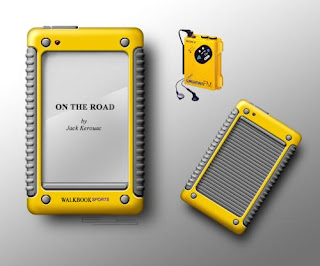 While it's no secret that the current version of Kindle [ Amazon's eBook Reader ] is about as sexy as a Soviet issue army boot, there are quite a number of people speculating on the designs for the NEXT version of the device.

Some of those designs are real paper comic killers. At this point its becoming less and less about IF and more about WHEN such devices will be showing up.

Jim
I like your "Paper Comics Death Watch" updates. Do you think that the CBR format will continue to hold its ground in the new born "digital comics" market?

Caine! Great to hear from you!

You ask a VERY good question here, because as much as I love the cbr format, it is interesting to see other formats (like Marvel's) come into play...

...Currently, the biggest advantage the cbr format has is that it is the format of choice used by the *scanners* - those dedicated individuals who scan, not only the new comics that come out each week, but also make sure that all the old issues of Claw the Unconquered or Morlock 2001 are getting scanned.

So, I think that cbr format will be with us for quite some time. Whether it will remain the format of choice is hard to say.