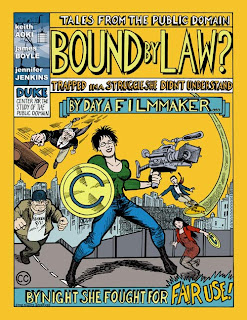 I know I typically have a couple of Golden Age comics for everyone on Mondays, but I stumbled across Tales From The Public Domain: Bound By Law while researching Public Domain characters, and it's really something everyone should check out.

It was produced by Duke University, so I'm inclined to think it's been fact checked pretty well, and is AT LEAST as reliable as asking people at Newsarama about Public Domain...

From the Duke University site...
“Bound by Law translates law into plain English and abstract ideas into ‘visual metaphors.’ So the comic's heroine, Akiko, brandishes a laser gun as she fends off a cyclopean 'Rights Monster' - all the while learning copyright law basics, including the line between fair use and copyright infringement.” -Brandt Goldstein, The Wall Street Journal online

A documentary is being filmed. A cell phone rings, playing the “Rocky” theme song. The filmmaker is told she must pay $10,000 to clear the rights to the song. Can this be true? “Eyes on the Prize,” the great civil rights documentary, was pulled from circulation because the filmmakers’ rights to music and footage had expired. What’s going on here? It’s the collision of documentary filmmaking and intellectual property law, and it’s the inspiration for this new comic book.

Follow its heroine Akiko as she films her documentary, and navigates the twists and turns of intellectual property. Why do we have copyrights? What’s “fair use”? Bound By Law reaches beyond documentary film to provide a commentary on the most pressing issues facing law, art, property and an increasingly digital world of remixed culture. This book is available under a Creative Commons Attribution-NonCommercial-ShareAlike license.

Hope you enjoy it!
Posted by Jim Shelley at 6:13 AM