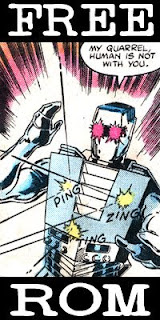 If there were ever two words that were meant to be put together then separated by a comma, more than those two words, well, I've never heard them.

And while my love for the Rom is never going to rival Chris Sims (to whom I swiped the Free Rom Banner), I do have a lot of love for the character. And yet, we'll probably never see an Essential Rom collection from Marvel, and that's a durn shame.

Now I'm not going to retread the sorry state of Rom's mucked up licensing rights, but I do want to use him as a poster child for today's topic.

Comics In Limbo:
Lost Gems Of The Comics World Saved by the Scanners!

Look, I know it's real easy to point you fingers of shame at all the Comic Book Scanners who week after week scan copies of CountDown or Iron Fist and then upload them to the internet, but let's not forget that those guys also are helping to preserve many other comics that don't have a snowball's chance of getting an Essential or Showcase. 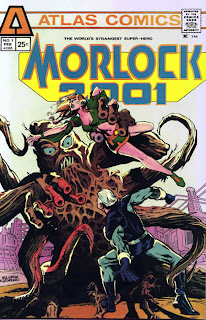 I mean, do you really think you'll ever see a Morlock 2001 Omnibus? Highly unlikely considering the series only ran 3 issues and probably only has 2 fans on the entire internet, but does that mean it should just be lost and forgotten? Nay, says I!

I mean who wouldn't want to read this:

The year is 2001 A.D. A time when life as we know it has become hideously transformed. A rigid totalitarian regime holds the people in an iron grip, and mankind's greatest truths have been declared "inoperative".

Professor Kroschell, the "mad botanical professor" has been conducting illegal botanical experimentations when he is gunned down by the jack-booted police. They confiscate a gigantic pod that holds a male human within its leaves. Outwardly appearing human yet structurally a plant, we are introduced to Morlock !

When transformed into his plant-like form his mind is clouded with the bestial preoccupation for finding food.

Only to later find out that the mad scientist was planning to develop an army of Plant Men to overthrow the dictatorship, Morlock continues his fight against oppression in 2001. Beware the touch of Morlock ! He'll turn everyone into fungus creatures.

I know what you're thinking

- "Jim, a half man/half plant who fights a totalitarian regime and turns into a rampaging tree creature? I've seen that a million times! There's no way you could get more than 2 issues of good comics out of that premise!"

Well, fear not, because with issue 3 they completely change the whole tone of the series, so there you go. An awesome trilogy to rival Star Wars and Lord of the Rings!

Currently, the rights to Morlock 2001 (and all the other Atlas/Seaboard characters) probably reside with Chip Goodman's heirs. I don't know that they are ever going to do anything with those characters (which just might be a good thing actually - I mean do we really want to see an Iron Jaw movie?) so it's really good that the original comics can still be found somewhere.

And the same thing is true for Rom. I sincerely doubt Marvel is ever going to be able to reprint those old Rom comics. Or their old Micronauts for that matter. Which is a durn shame because those were some great stories.

I also don't imagine that DC is going to rush out a Jerry Lewis Showcase anytime soon. Or Amethyst Princess of Gemworld for that matter (not sure what the hold up is on that one but doesn't that seem like a natural?)

So, were it not for those diligent (and slightly OCD) young men awash in the glow of their HP Scanner then such gems of comics history would be eternally lost. Or at least really, really hard to find in the the backissue bins on the floor at your local comics shop. You know which bins I'm talking about - the ones that say 4 for a $1.00 and smell sort of like dead gerbils. You spend more than an hour thumbing through those bins looking for a complete set of Justice League Task Force and your hands will stink like you cleaned a cat box with a block of moldy cheese.

In conclusion, the next time you see some goofball talking on a messageboard about how illegal comic book downloading is destroying American values, getting girls pregnant out of wedlock and turning kids to the devil weed, remind that guy about Morlock 2001, Rom, SpaceKnight and this guy... 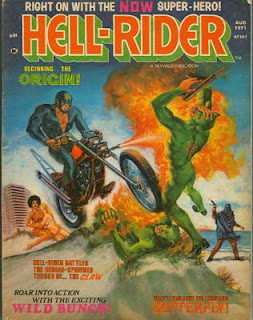 
Right On with the NOW Super-Hero, Indeed! :D

Thank you Scanners! Comic Fandom owes you a beer!

Elfquest is going to be distributed Online Now

Thanks goes to Tech Savy Phil Looney for passing that bit of information to me!

I must confess to a real fondness for the Atlas hero Phoenix -- mainly because of the distinctive Sal Amendola art and character design -- but Planet of Vampires is the series just begging for a film treatment.

Rab! Durn I got so busy with my new job, I forgot I've got a surprise to send you! I'll get that in the mail next week!

I totally hear you about Planet of the Vampires! You have no idea how much that premise has kept me up at night. I think it just such a neat idea, I'm trying to find a way to do something similar that captures the feel of that book.

It's a bit of Omega Man, a bit of Road Warrior, and of course a bit of Planet of the Apes with a light dusting of Doomsday+4 sprinkled on top. Place in a 350 degree oven for 45 minutes and serve!

An Atlas/Seaboard Omnibus or two reprinting the company's entire output would be nice, if only for posterity's sake. Dark Horse might be the best home for such a project.

The two issues of Howard Chaykin's Scorpion are especially important, as the seeds of much of his 80s work are planted there. And the one that Ditko did--The Destroyer, I think--is nice and goofy.

Ditko also did the art for the last two issues of Tiger-Man.

Maybe Dynamite would be a good home for our Atlas Omnibus...didn't they get the reprint rights to all the Crossgen stuff?

Just as a small update here...

I sent an email to Dark Horse about the idea of making an Atlas/Seaboard Omnibus (haven't heard back).