The Flash Vs Arrow

Editor's Note: Today, I am proud to present a guest post by Blair Marnell with his thoughts on the Flash/Arrow crossover episodes. Blair Marnell is the TV and Comics Editor of CraveOnline and a freelance writer for ComingSoon.net and SuperHeroHype. Previously, he wrote for Wizard Magazine, Geek Monthly, MTV Splash Page, Fan TV and Comics Bulletin.
This past week, The CW ran a two night event between The Flash and Arrow that served as the first full crossover between each series. It’s a superhero fan’s dream. 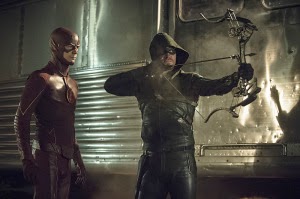 I wasn’t around for the ‘70s, but the closest TV equivalent I can think of would be if CBS had crossed over Wonder Woman and The Incredible Hulk when they were both on the network... ownership issues aside. 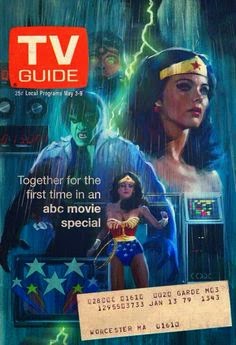 CBS didn’t even give fans an Amazing Spider-Man and Incredible Hulk crossover, and that should have been automatic!

Oddly enough, CBS ran the first TV series adaptation of The Flash back in 1990. But a few decades later, it Is CBS’ corporate sibling, The CW that has become the superhero network. Both Arrow and The Flash are now the signature shows of The CW that weren’t originally created for another network.

But the thing that I found most striking about The Flash and Arrow crossover is just how much I like The Flash more than I like Arrow Season 3 at the moment. The Flash just feels like a more fully realized show at the moment and the third season of Arrow hasn’t quite found itself yet.

This version of The Flash owes everything to Arrow. If Arrow hadn’t proven to be a hit, I highly doubt that there would be a Flash TV series on the network right now. After Green Arrow was proto-Superman’s substitute Batman for half a decade on Smallville, that’s a significant step up for the character in the eyes of the general public. 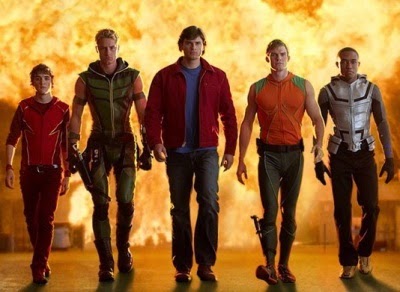 One of the more obvious instances of Arrow’s influence on The Flash is the way that Team Flash was assembled before the end of the pilot episode. The Arrow creative team tried to run Oliver Queen (Stephen Amell) on his own for a few episodes before teaming him up with John Diggle (David Ramsey) and Felicity Smoak (Emily Bett Rickards) later in the first season.

That dynamic shouldn’t work for The Flash, but somehow it does. Gustin has turned out to be a really good leading man and Cavanagh’s character has been the most intriguing addition to the Flash mythology. Caitlin and Cisco need better writing, but they’re bearable. Law & Order veteran Jesse L. Martin has been the most human character on the show as Barry’s surrogate father. Detective Joe West.

I’m gonna save my Iris West (Candice Patton) rant for another time. But she’s this show’s Laurel, which Arrow fans should instantly understand.

The Flash isn’t perfect, but it’s been amazingly solid through eight episodes. And the “Flash vs. Arrow” story of the eighth episode was the best one yet. The Flash writers wisely left the dead weight of Arrow aka Laurel (Katie Cassidy), Roy (Colton Haynes) and Thea (Willa Holland) off of the stage while giving Oliver, Felicity and Diggle the chance to shine on a different show.

One of my favorite parts of the episode was Diggle’s reaction to Barry’s superspeed. That was especially effective because we’ve been watching Diggle on Arrow for over two seasons and it meant more to see him freak out about it than it would have for a random character whom we had never seen before.

Rickards was also really good in the episode as Felicity was given a chance to actually be funny... which she seldom gets on Arrow. I think she’s a better fit on this series, but the Arrow creative team seems intent on following the fandom’s demand for an “Olicity” relationship.

But the most compelling part of “Flash vs. Arrow” is that both Gustin and Amell had a chance to play off of each other in comedic sequences and in a very well choreographed fight between Arrow and the enraged Flash. For TV action, that may be the new standard for a superhero fight. Remember when Smallville would give us 30 seconds of Clark Kent fighting Doomsday and then cut away? That didn’t happen here. 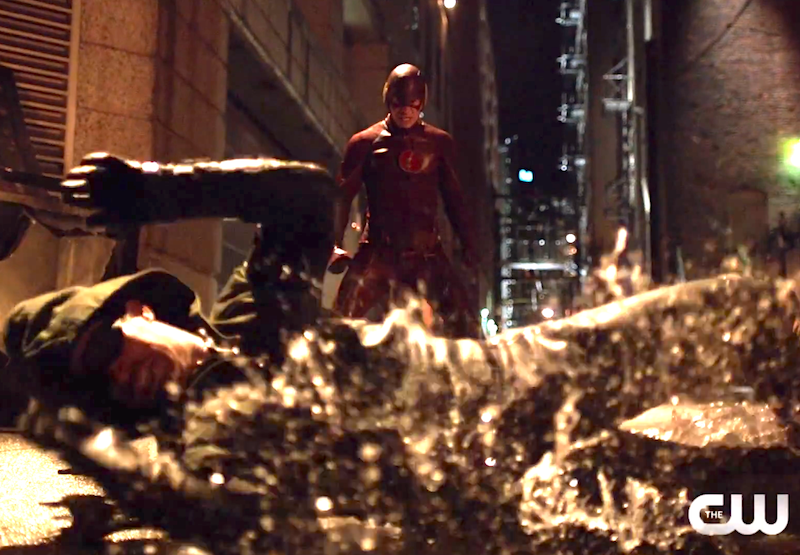 I have to admit that the biggest laugh of the episode for me came when Oliver and Barry took out the villain of the week so quickly that they did it during the final commercial break and he was already being locked up in STAR Labs when the show came back.

It should be said that Arrow’s side of the crossover, “The Brave and The Bold” was not a bad episode. It was just too consumed with being an episode of Arrow that happened to have The Flash in it.

You’d think that the Arrow creative team would have used the special occasion to step away from the flashback structure for a week, but nope! We lost a few minutes of valuable screen time to Oliver Queen learning how to come to grips with torturing someone for the greater good. There is some dramatic potential in the way that Oliver has essentially absorbed the worldview of Amanda Waller (Cynthia Addai-Robinson), but that sequence was wasted in this episode.

It was also unintentionally hilarious to see how the show went out of its way to make Captain Boomerang aka Digger Harkness (Nick Tarabay) into a credible threat to both The Flash and Arrow. It’s one thing for Boomerang to fight Oliver and Roy to a standstill, but to make him tactical genius who hid bombs throughout the city just to keep The Flash off of his trail?!

And does the casting director of Arrow watch any other shows besides Spartacus? No, really. I want to know.

Once again, the best part of Arrow’s side of the crossover was the interplay between Oliver and Barry. They really are fun to watch when they’re sharing the same stage and both Gustin and Amell deserve recognition for how well they handle their roles. I still think that DC is making a mistake by not tying these shows into the movies. The DC Cinematic Universe of Man of Steel was a very joyless world. I want to see more of the TV world created by Arrow and The Flash.

Despite all of the changes made to both characters, Arrow and The Flash feel close to the spirit of the comics that inspired them. Neither show is perfect, but we should all recognize how fortunate we are to be in an era when we have two terrific superhero dramas... on the same network.

I've only watched the first half, but I really enjoyed the Flash portion of the crossover! It really had the classic comic book vibe to it with the humor and action. I hope I enjoy the Arrow portion as much.

I totally get what you mean by Iris being the Laurel Lance of the show. The big flaw in both of those romantic subplots is that we sort of already know the ending don't we?

That's part of the Iris problem. If I get another chance to talk Flash on the site, I'll go into that in more detail.

I for one am glad that they've kept these two series removed from the DC cinematic universe. You've said it yourself...The DC Cinematic Universe of Man of Steel was a very joyless world. I don't want Arrow and the Flash to be caught up in that.

"I wasn’t around for the ‘70s, but the closest TV equivalent I can think of would be if CBS had crossed over Wonder Woman and The Incredible Hulk when they were both on the network... ownership issues aside."

What about the 1960s Batman/Green Hornet crossover?
It was the first inter-company team-up (DC/Gold Key), predating Superman/Spider-Man by a decade!

Reno, as I understand it, there's going to be a new Flash movie with someone other than Grant Gustin in the title role. That seems unnecessary to me, but it's WB's money to blow.

Britt, you're right. I completely forgot about that Batman '66 and Green Hornet crossover. Still would have loved to see a CBS crossover, even with that less than Amazing Spider-Man.

"CBS didn’t even give fans an Amazing Spider-Man and Incredible Hulk crossover, and that should have been automatic!"

Despite the flaws of the 70's live action Spidey I think Nicolas Hammond's Peter Parker with Bixby's Banner would have clicked well. Not to mention Peter having to deal with Jack McGee.

Matt, I would have enjoyed that too. And as imperfect as '70s Live Action Spider-Man was, I would probably buy it on DVD if I could.

It's the Spider-Man collector in me. It never entirely goes away...

I just watched the team up.I enjoyed the inter-character dynamics a lot. Though Arrow is really not my idea of Oliver Queen. He's more or less the Bruce Wayne of Earth CW (in Smallville he was kind of Bruce Stark.)

They've sort of gone all-in on Green Arrow as the Batman you use when you can't have Batman. Especially when Ollie was with Roy I just kept thinking (why the hell is there not a Batman show like this?}

I was a little bugged that The Flash story has a hero goes rouge because of mind woogie plot. It's a classic superhero thing and I totally respect that it's just never been one of my favorites.

Partly because of scenes like the one with The Flash and Iris. She's seen crazy abilities that metahumans have but doesn't believe Barry when he explains the situation.

Of course it doesn't help that in these kind of stories when the time comes for the hero to explain what happened writers always seem to have them doing it in the most half-assed way.

"A metahuman messed with my head." No this is not the time to be flippant and casual.

He could have easily said "A metahuman with the power to drive people insane with anger used his abilities on me just like he did to the people at the bank the other day.