The Flash: A Midseason Report

Editor's Note: Today Blair returns with some interesting thoughts on the Flash and the midseason finale: The Man In The Yellow Suit. - Jim
There's so much that can go wrong with a comic book inspired TV show that it's refreshing when a series is good out of the gate. 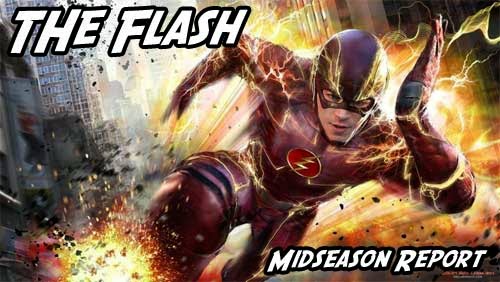 The Flash is a very good series. Someday, it may even be a great one.

I give a lot of the credit to Geoff Johns, the long time comic book writer who has ascended to the post of DC Entertainment's Chief Creative Officer. That means he actually has a say in how these DC characters come to life in live action.

It was Johns who added the tragic element to Barry Allan's back story with the murder of his mother, Nora Allen at the hands of a time traveling Reverse-Flash. 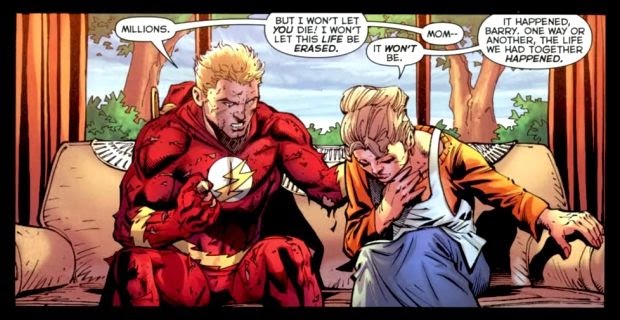 At the time, I was not happy with that change. The Flash is not Spider-Man! It gets really annoying when Spider-Man's tropes are given to other heroes who previously had their own identity.

But the inherent problem of Barry Allen is that he is the most boring man alive. At least that's how he comes off in the comics, even in The New 52 reboot. But on The Flash TV show, Grant Gustin's Barry Allen actually feels like a living, breathing person. And this time, the Spider-Man vibe really plays well. Even the Flash theme reminds me of Danny Elfman's Spider-Man music.

Although this is Flashback Universe's midseason report for The Flash, the primary focus is going to be on episode nine: The Man In The Yellow Suit. From this point on, there are spoilers ahead from the midseason finale. I am assuming that everyone is current with The Flash if you keep on reading. 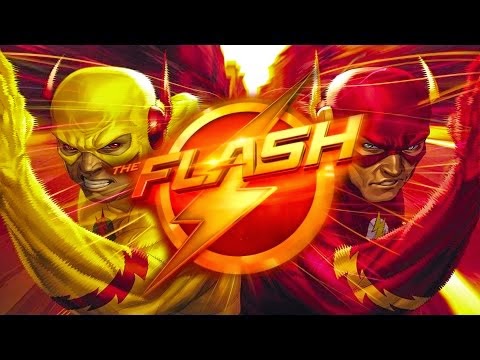 The Flash TV series has kept Johns' back story about the murder of Nora Allen. But more impressively, it's built up Reverse-Flash into a truly effective villain. And I have to give the show bonus points for giving that role to one of the best actors on the show: Tom Cavanagh.

From the end of the episode, we are meant to infer that Cavanagh's Dr. Harrison Wells is the Reverse-Flash. It's not a perfect fit, as Wells' actions have shown his desire to protect Barry, even if he only wants to ensure his own future. It also requires Reverse-Flash to be in two places at once. Or possibly two different people.

Wells killed Simon Stagg to protect Barry and he encouraged Plastique to kill General Elling before he could threaten Barry and others like him. On the other hand, only Wells knew that Detective Joe West had reopened the Nor Allen case. Shortly thereafter, Reverse-Flash paid Joe a visit and stole all of his evidence at super-speed before threatening the life of Joe's daughter, Iris. 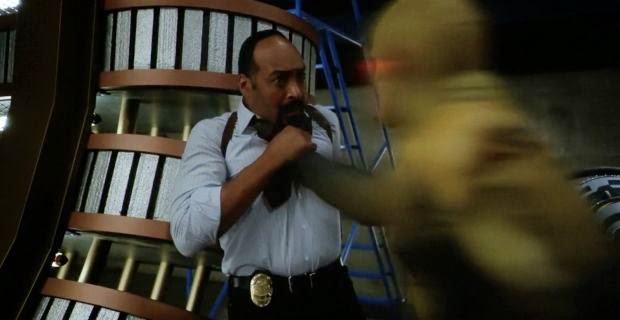 The creative team of this series have done a terrific job of conveying how frightening that Reverse-Flash can be to people who don't have superpowers. Even Barry is completely outclassed and overpowered by Reverse-Flash. Any good hero needs a villain who can truly challenge them. And we've got that here.

In the midseason finale, both Gustin and Martin delivered their best performances to date. Martin is just an amazing actor. The words given to Joe West aren't always well written, but Martin sells it with such convincing emotions and gravitas that it resonates. Gustin has also been very good as Barry. This episode gave Barry a chance to pour out his heart to both of his dads and to Iris (Candice Patton) and all three scenes worked.

I am less sure about Patton's abilities as an actress. But the show hasn't done any favors for her by making Iris into Laurel 2.0 (for all of you Arrow fans). Making Iris into The Flash's cheerleader feels like tired material barely halfway through the season. And I'm already bored with Barry pinning for her heart. 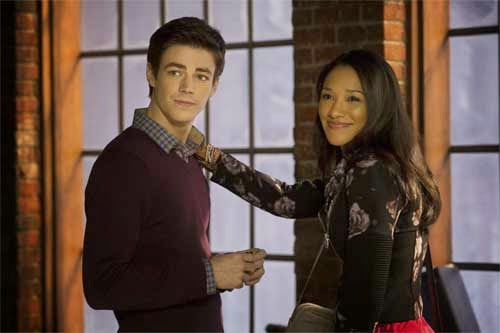 Another problem with the show is that two key members of Team Flash are severely underdeveloped. Barry, Joe and Wells get all of the really juicy material while Caitlin Snow (Danielle Panabaker) and Cisco Ramon (Carlos Valdes) are barely characters at all. They exist only to give Barry exposition, scientific explanations (well, comic book science) and give him someone to play off of. The show has halfheartedly given Caitlin a tragic backstory in the form of her lost fiance, Ronnie Raymond (Robbie Amell). Comic fans know him better as Firestorm.

Despite claiming to have no idea who Caitlin is or even his own name, Robbie stalks her in this episode until she finally sees him. However, the first two Firestorm scenes have such sloppy editing that it feels like important moments were skipped over. That is not the way to make us care about Ronnie or Caitlin. 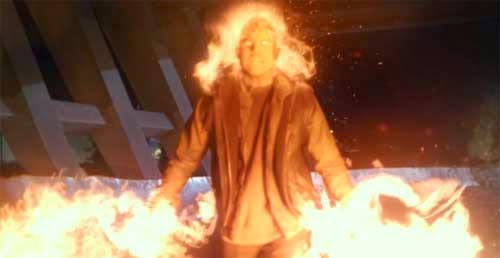 Out of nowhere, Ronnie shows up just in time to save Barry from the Reverse-Flash. In terms of the plot it makes no sense... even if Robbie only came to save Caitlin. But then how would he have even known to come? Basically, this only happened to keep Reverse-Flash as an unstoppable threat without killing Barry or his friends.

I haven't really dealt with Rick Cosnett's Eddie Thawne because he annoys me. But the midseason finale may have given him something interesting to play. Eddie realizes that the Reverse-Flash could have killed him... but didn't. If the show follows the comic here, it could mean that Eddie is Wells' ancestor... or Eddie may become a Reverse-Flash as well.

The midseason finale had some shortcomings, but this was a satisfying way to closeout the opening episodes. I am excited to see where The Flash goes from here.

I cannot work up too much excitement for the show. Mind you, I've seen about 3.5 episodes...

2. Racial re-casting. I like Jesse Martin and his character is fine except for the fact that he is the father of an also African American Iris West. Racial diversity is fine, create strong new characters for that instead of re-casting. Diggle is a strong addition to the "Arrow" show because he is an original character and has now spilled over into the comicbook DCU. That's how you build diversity.

3. Iris' non-existent character. The above could be mitigated if Iris was a more interesting and compelling character. A blogger? Dated, cliched and not much of a respectable career choice. Trying to avoid being Lois Lane and they make her into a second-rate Chloe Sullivan. There are many ways to keep the reporter background and have her be a unique and strong character such as a crime reporter, television reporter, documentarian (documentariast?). Reporters who solely blog and not for a respectable publication aren't really on the same level. And, I say that as a blogger.

4. Everyone knows his secret identity except for the one person that Barry should feel the most likely to share with. Basically, the same status quo that "Arrow" now finds itself in. It makes the one person not knowing seem more contrived and artificial than logical.

5. DCU characters mis-used or name only. I was impressed they had Simon Stagg... and then they killed him off. His caveman henchman is instead a person of color (yeah, that isn't potentially offensive). If you aren't going to use a character correctly.... "Arrow" has this problem in spades. Ronnie Raymond is an engineer on a state-of-the-art project? Talk about completely missing the concept of the character.

6. First season of Smallville syndrome - setting up the villains to be super-powered by the same event.

7. Stupid bits such as running across town without his clothes. Now, at his speeds, he could run back and get his street clothes in the amount of time that he swipes clothes off the rack from a nearby store.

8. The sci-fi crew. With "Arrow", he at least has some pulpish roots and it grew organically and fueled stories and conflicts. However, with Flash, the crew seems to take away some of Barry's thunder. He is supposed to be a talented scientist, having a crew of even more talented scientists lessens him. He comes off as being second-rate, he's not guiding them or using them as much as the other way around. Again, this might make sense if it was Wally West, but we should see Barry as being internally driven.

I think their Barry is kind of a beerslam of Barry and Wally. But that makes me wonder what is then left for when Wally actually shows up on the show?

..and yeah I don't get Ronnie Raymond as an engineer either.

As for the crew I kind of like Caitlin and Cisco but it is endemic of these shows needing to put a platoon of supporting characters around the main hero. I think of it as having a solo hero comic that then insists on having an team-book sized cast.

The Knight Rider reboot/continuation of 2008 suffered the same problem. In the original series you had Michael, Bonnie, and Devon. The show felt the need to distribute these three basic roles to varying degrees across 7 characters.

I get them needing to build a supporting cast, Barry never really had a very strong one. But, it seems a bit too on the money of a copy to Arrow: A not quite girlfriend love-interest, her over protective cop father, her actual boyfriend who may become a super villain, and his behind the scenes IT crew to help him out.

Would help if the supporting cast came from the character more. While Barry might have contacts with STAR Labs for some of the big stuff (the Wells and Tina McGee characters) while we see some of his actual Police Lab co-workers as friends and colleagues on day-to-day stuff (and keeping the Detective West and Eddie characters, with maybe a name change for the former, for people on the Force he interacts with). You set that against Iris working for local news and her bosses and rivals trying to get the dirt on the meta-humans in general and Flash in particular.

Then bring in some rival love-interests from the comics, Fiona (his second wife-to-be), the lady Flash, maybe even Jonni Thunder as a wildcard.