Editor's Note: Today Blair Marnell continues his CW Superhero midseason reports with a look back at the first half of "Arrow" Season 3. - Jim

I wasn’t always a fan of “Arrow,” especially in the first season. 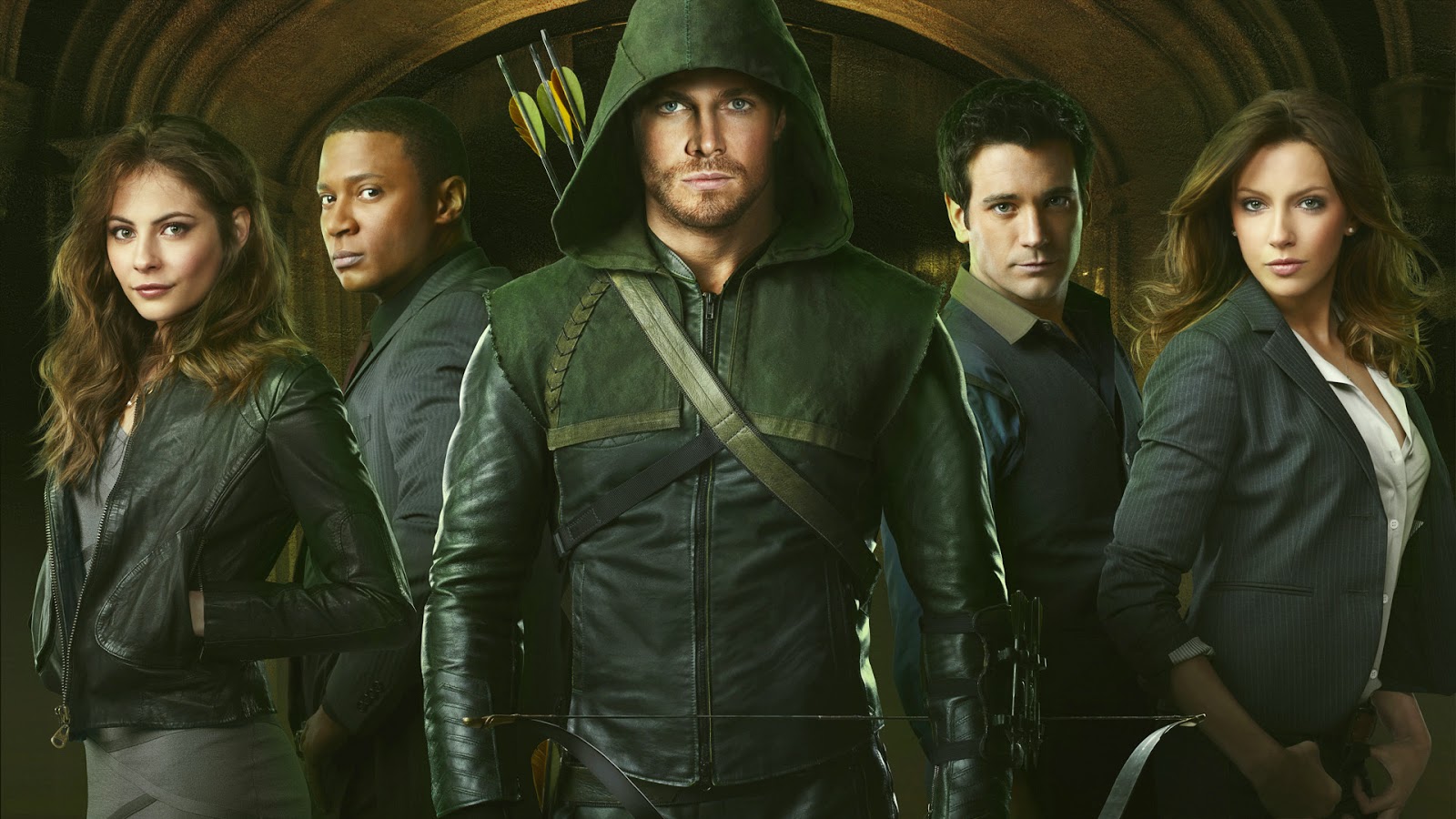 Although “Arrow” has been pretty good in terms of action since the beginning, the dialogue was beyond atrocious during the early days as the show reveled in its CWness. There was Stephen Amell’s apparent allergy to shirts, Oliver’s doomed love with Laurel Lance (Katie Cassidy), and the most CW characters of them all: Oliver’s sister, Thea (Willa Holland) and their mother, Moira (Susanna Thompson).

That’s not to say that there weren’t episodes I enjoyed during “Arrow” Season 1. It just wasn’t fully clicking for me. It didn’t help that “Arrow” killed off Tommy Merlyn when Colin Donnell was easily one of the best actors on the series. It took most of the first season for “Arrow” to find itself, but I didn’t really get invested in it until early in the second season when the following line was said:

Now, it’s just a name, right? A little Easter egg for the DC fans and viewers of the Christopher Nolan Dark Knight films who remember that Ra's al Ghul just happens to be one of the greatest Batman villains of all time. It didn’t necessarily mean that we’d ever get to see Ra's al Ghul on “Arrow,” but the idea that he was out there really expanded the world of the show.

Green Arrow doesn’t have the greatest rogues gallery in the comics, which is why “Arrow” has so liberally borrowed other villains from the DC Universe. John Barrowman was a terrific choice as Malcolm Merlyn, but Slade Wilson aka Deathstroke (Manu Bennett) was the only other adversary who really registered on the show... and he’s more of a Teen Titans villain than an enemy of Green Arrow. At least that was the case before Identity Crisis came along and tried to spark that rivalry between them.

The point is that there was no clear choice for “the big bad” of “Arrow” Season 3 except Ra's al Ghul. It really had to be him, because the show had foreshadowed his appearance for almost a full season. If Fox’s “Gotham” had cockblocked that, it would have killed that momentum.

That said, I’m not entirely sold on Matt Noble as Ra's al Ghul. The midseeason finale of “Arrow” Season 3 gave us our best look to date at Noble’s incarnation of the character. He’s not bad in the role, but I’m not blown away by this casting choice.

From this point on, there are full spoilers ahead for the “Arrow” Season 3 midseason finale! If you’re still reading after this paragraph, I’m assuming that you’re up to date with the show.

One thing that I loved about the midseason finale was that Oliver Queen was completely outclassed in the unnecessarily shirtless in the snow duel with Ra’s. The Demon’s Head easily disarmed Oliver and stabbed him with his own sword before kicking Oliver off of the mountain to his apparent death. But if anyone thinks that Oliver is really dead then they haven’t been reading enough comic books. 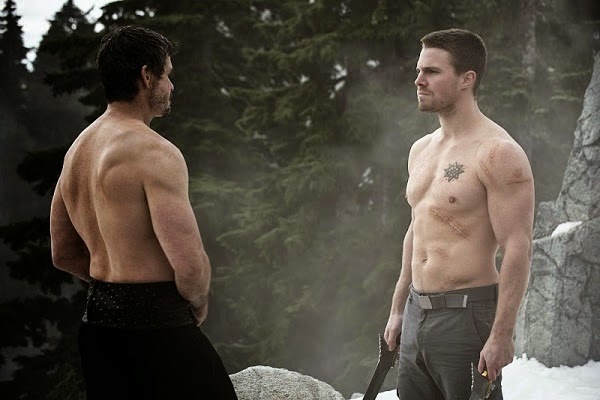 The downside of Noble’s performance is that he didn’t demonstrate the force of personality behind Ra's al Ghul. This is a world class adversary who could teach James Bond villains a masterclass on truly epic villainy. Ra's al Ghul is the hero of his own story. He wants to save the Earth... but he’s willing to kill nearly everyone on the planet to achieve that goal. In “Arrow,” that same sense of purpose isn’t coming across. Ra’s is just the leader of the League of Assassins, and it’s not clear if he has any larger agenda beyond that.

There needs to be more animosity between the Arrow and the Demon’s Head. Their conflict just isn’t personal enough to resonate. Malcolm Merlyn is still coming off as a bigger villain because he represents a very real threat to Oliver’s family by his corrupting influence on Thea. It may go against all sense of logic and reason, but Thea’s murder of Sara Lance (Caity Lotz) is actually a great way to continue Oliver’s feud with Malcolm.

Unfortunately, Thea doesn’t really have any agency in this storyline. Thea doesn’t know that she killed Sara because Malcolm drugged her with some previously unmentioned wonder plant that made her susceptible to suggestion. The “Arrow” writers really dropped the ball by not hinting at that plant’s existence until the episode that they sprung that explanation on us. That is the definition of cheap writing from the seat of your pants and making it up as the story goes along.

In theory, an Evil Thea is something that could have been a lot of fun. But the show wants to have it both ways, by not fully committing to making her a villain and by keeping the old Thea around... and giving her the most annoying character ever as her new love interest in the form of Chase (Austin Butler). Seriously, I’d pay good money to see Chase get brutally killed by an arrow. 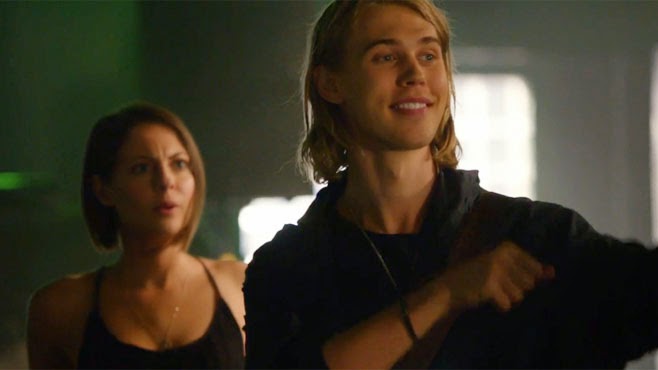 It’s the same story with Laurel. The “Arrow” producers have been trying so hard to make Laurel happen for three seasons that they can’t step back and realize that it just isn’t working. The only tacit admission of their failure is the way that the writers have reoriented Oliver’s romantic feelings from Laurel to Felicity (Emily Bett Rickards). Personally, I hate the “Olicity” shipping, but it is the pairing that the majority of the show’s fans seem to gravitate towards.

If the “Arrow” creative team had really been listening to the fans, they wouldn’t have written out Caity Lotz’s Sara Lance. She was the Black Canary that we didn’t have to wait three seasons for. Lotz was more convincing as a heroine and she had more charisma than Holland or Cassidy combined. Instead of signing Lotz as a series regular, they killed off the wrong Lance sister because the creative team is still trying to make the audience love Laurel and accept her as a heroine.

But I think it’s too late for that. The next couple of episodes are supposed to put Laurel in costume as Black Canary, but Cassidy is working against three seasons of bad writing to try to change the audience's perception of Laurel. And let’s be honest, Cassidy’s performance hasn’t exactly been great.

Compared to “The Flash,” “Arrow” has seemed strangely unsure of itself this season. Brandon Routh has been a fun addition to the cast as Ray Palmer, but The Atom feels even more out of place on “Arrow” than The Flash does. More than anything, I think that “Arrow” has lost its sense of direction. The only plots that have been driving this season forward have been Sara’s murder and Laurel’s supposed evolution into a heroine. Oliver Queen is being poorly served by his own show and even John Diggle (David Ramsey) has been reduced to the guy who’s trying to get Oliver and Felicity back together as a couple... just because he cares for them.

That my friends, is about as CW as The CW gets.

Regardless, a strong cliffhanger can make up for a lot of shortcomings. “Arrow” definitely had one of those in the midseason finale. The challenge for the show will be to deliver a resolution for that cliffhanger that doesn’t take a cheap way out. I’ll accept the existence of a Lazarus Pit, but even that’s a little too easy.

I think the “Arrow” creative team can make adjustments after some of their misfires, but first they need to realize where they’ve gone wrong. Sometimes, that’s the hardest thing to figure out.
Posted by Jim Shelley at 9:19 PM

I think for me the presence of Ras just hangs a lampshade on DC/WB/CW using Green Arrow as discount Batman.

I think a better Green Arrow project would have been like a kind of superhero buddy cop series with Ollie and Black Canary. Sort of Hart to Hart with arrows and ass kicking.

I've said it before I think Arrow works better as the Green Hornet with Diggle as Kato.

I wish instead of Ras, they would have gone with Kobra. There would be fewer Batman connotations and expectations. Heck, it would have been better for this to be the Brother Blood arc for that matter. The actual Arrow version of Blood was pretty sad, making him a subordinate villain to someone else. I couldn't believe that is how they thought to interpret a rather cool and intimidating character.