Is Andy Olsen the real creator of Wolverine?

Over at Bleeding Cool, Rich Johnston has been following the astounding price jump in ebay auctions featuring Foom Issue 2 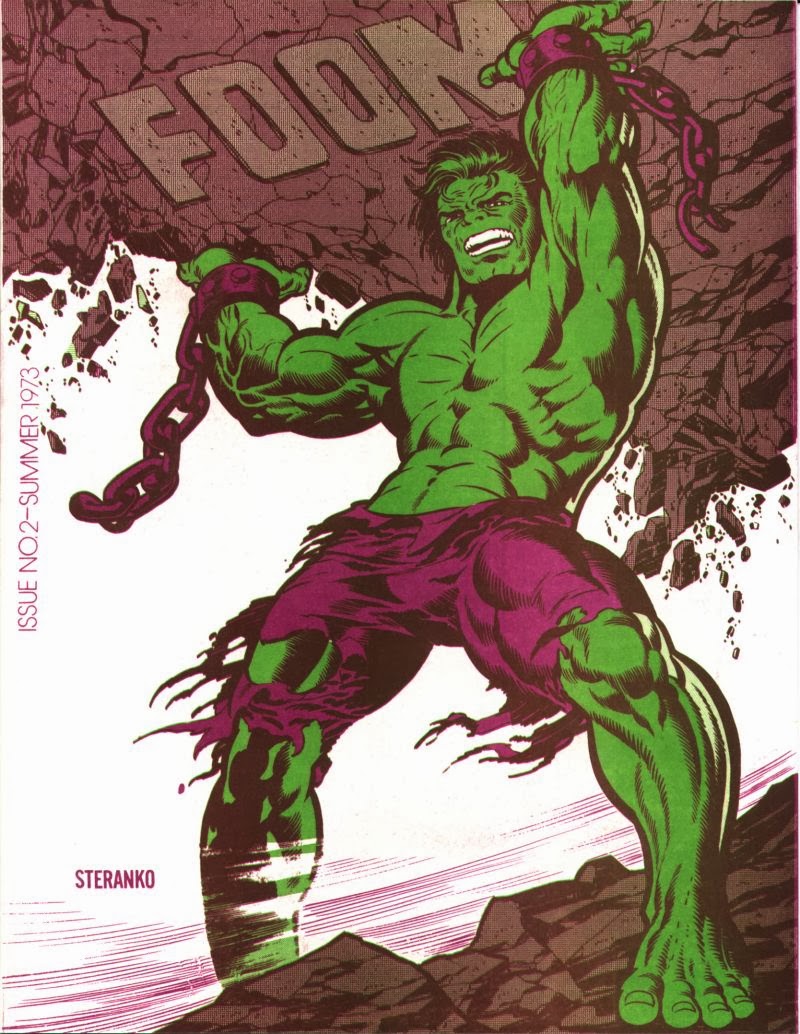 On ebay, this issue normally sells for $5 but recently, it has been selling for over a $100 with a recent auction ending at $225. What seems to be driving this price is a story Rich did pointing out that in issue 2, there was a Create A Character contest in which a Marvel Fan Andy Olsen sent in a cyborg character named Wolverine.

Click on the image below and look at the center of the page to see what the hoopla is all about: 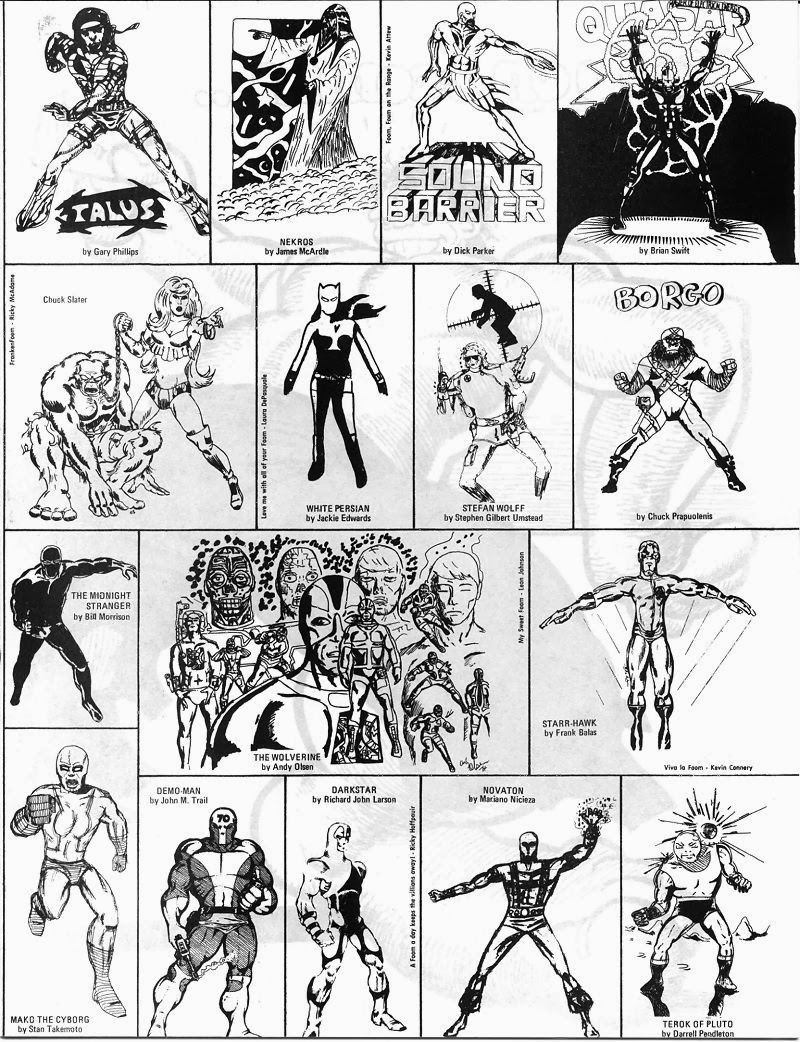 While the timing is coincidental (Andy's character appeared 6 months before Len Wein and Herb Trimpe created the character in Hulk 181) I think it's safe to say Marvel doesn't have to worry about Mr. Olsen getting lawyered up and coming after them. While Olsen's contest entry is sort of neat with its Origin Montage as a background, the character design is vastly different. This is just another one of those cases of people latching on to a cool sounding name (like Scarecrow) and going with it. Notice there is also a Quasar among the entries.

Still, in digging around to find out what the character looked like, I got a kick seeing all the Create A Character entries. Here's the other page of entries from the same issue. 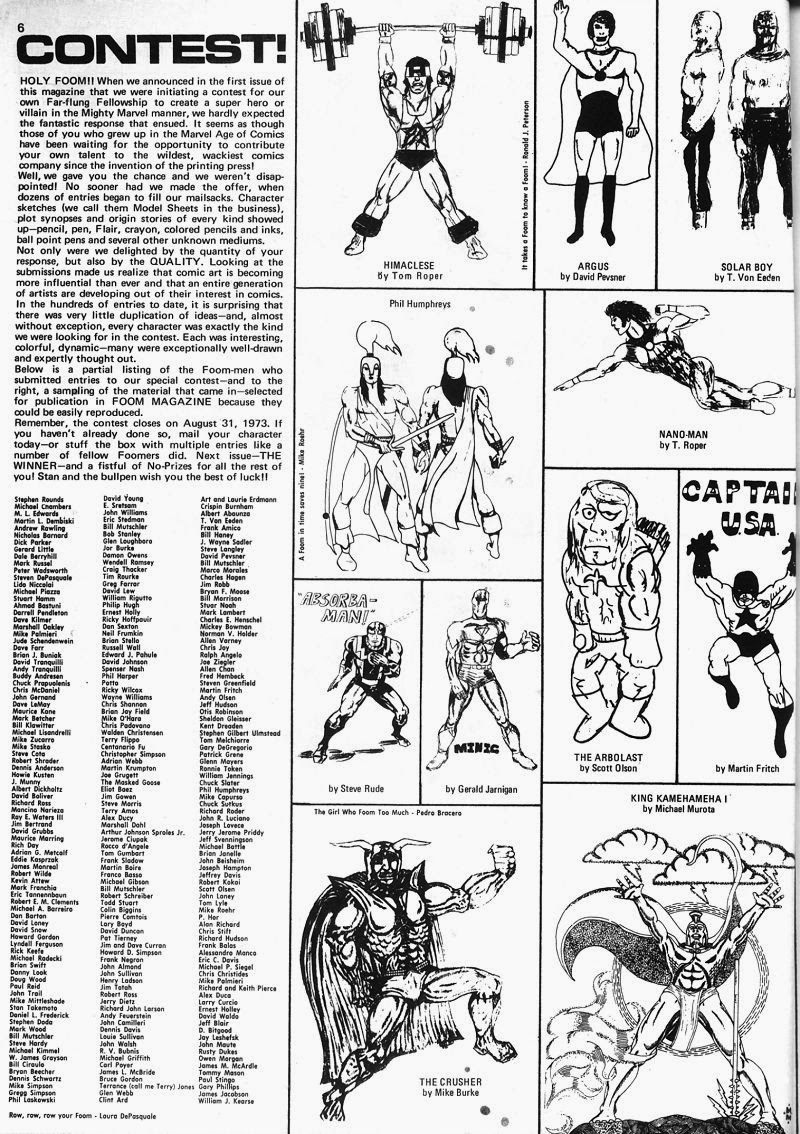 While the entries range vastly in quality and technique, I think my favorite is Chuck Slater's warrior woman with her chained ape sidekick.

Anyone else remember this issue?

There's also a Starr-Hawk there. Starhawk from the original Guardians of the Galaxy? And I'm assuming the STeve Rude who sent in Absorba-Man is the same Steve Rude we know and love today. :)

I was looking at that entry last night actually. I've spent a lot of time on the bay, and there are so many uneducated, speculating fools who think that just because they put it on the bay that someone is going to give them tons of cash. This FOOM is a latest example (along with the clods who think buying up Ant-Man comics is some how going to make their retirement) of such dolt behavior. Can you tell I used to own a comics store? :-)

PS: I hope your holidays were pleasant for you and yours.

@Reno - Yeah! I have always wondered the same thing about that Absorba-Man by Steve Rude! The style sort of fits what I think a young Steve Rude might have done.

@GACN - I know. It's always interesting to see speculators (and people who prey on them) get all excited because they think the first appearance of Ultron will be worth a lot of movie because he's going to appear in the next Avengers movie.

For the short term, for a lucky few, there will be some nice profit making, but for the majority of people all they will end up with is enough profit to cover shipping cost for the time they resell it.