Arrow vs Agents of SHIELD

Early December, my job sent me to Pittsburgh for several weeks where I had nothing to do at night but catch up on television shows. This allowed me to check out Arrow (which was recommended to me by my Father-In-Law) and Marvel's Agents of SHIELD (MAOS).

Here are my quick thoughts: 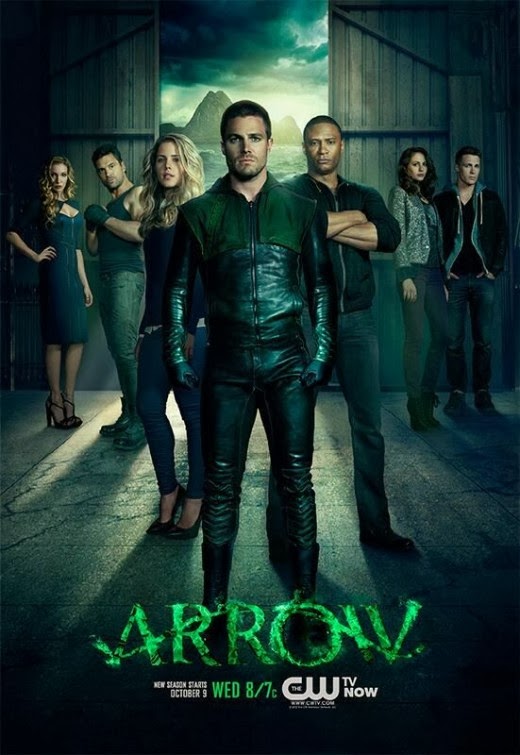 Here's what I like about Arrow:
Things I'm not so wild about:
Overall Grade: A- Okay, this is going to be much shorter as I only watched three episodes (which gives you some idea of what I thought.) Again, I hadn't seen any of the promos for this show and started into it cold with no expectations. I actually tried it before trying Arrow, which looking back should have helped.

Like I said, I quit watching the show with the third episode, so if it got better, I would be happy to try it again. Let me know what you think.

I largely agree. SHIELD has grown on me a bit a last couple of episodes, but they're still not really making it a "Marvel" show very much.

I've really liked how Arrow has weaved in Miraclo.

Yeah (on Miraclo) things like that enrich the show and still keep it accessible for folks like my Father-In-Law.

Actually what annoys me most about Arrow is all the DC connections because they really are little more than name-dropping. Almost every name character from DC comics bears little to no resemblance to the actual comic characters. I enjoy it, but I find I would probably like it more if it was the Centaur Arrow or Green Hornet.

I think SHIELD suffers from almost the opposite problem. They are hampered because they aren't tied to the Marvel Universe but the movie Avengers-verse. Thus, they actually limited to what they can use/introduce into the tv series. Nothing from Spider-man, X-Men. No magic as the Thor movies say there's no such thing. Nothing that might be fodder for future movies: Baron Strucka and Hydra, Dum Dum Dugan, Skrulls, Space Phantoms, etc. In the end, the should might have worked better if it was called The Men From U.N.C.L.E.

@Cash_Gorman - Sounds like you don't really like "interpretation" into new media? I guess it's always a line at which (if something retains the name only, what's the point, but if altering the origin of Miralco, Slade (or even Green Arrow) is enough to make them bear "little to no resemblance", it makes me think what you want is the comics strictly transferred to the screen and that's just never going to happen.

Even the animated approaches that tended to be closer to the comic changed things.

Why does it have to be either/or? I expect SOME changes. Different media have different strengths, limitations and all. But, I do think characters should be recognizable to who they are based on. The byword should not be interpretation but ADAPTATION. Solomon Grundy as a thug turned miraclo test subject has nothing to do with the character of Solomon Grundy, it's the character in name only. Be like reading the online comic based on the tv show and finding the 1940s version of Green Arrow and Speedy in it and Diggle as an Asian American female and claiming it's just a different interpretation for a different medium. No one should be upset since they kept the names, right? Funny, how this is frequently a one-way street. If the medium or relative realism keeps from using a character with a minimum of fidelity, CREATE A NEW CHARACTER.

Some comics references on Arrow are bit forced, like the Solomon Grundy thing. But the series all in all is enjoyable (although the whole Moira Queen trial went into soap opera territory with its depiction of court scenes).

Agents of S.H.I.E.L.D. Is a mixed bag, with some episodes being blah and some okay. The only thing that keeps me watching it is the "how did Coulson survive" mystery. But if they drag that on until next season It would be disappointing.

@Reno - yeah, I think from what I can tell on message boards, the mystery of Coulson's return is keeping a lot of people tuned in. I suspect, ultimately, it will be something that causes people to shake their heads because I can't see television offering up an explanation we haven't see 100 times in comics.

@Cash_Gorman - I was thinking about the comments you and Trey have here this morning and like you, I think there were some missed opportunities with Solomon Grundy.

It strikes that with the way that storyline was going they could have had a homeless person who was dressed more like traditional Grundy and done some cooler stuff with makeup to make him look more ghastly.

On the flipside - thank god we didn't get the gothy Utili-kilt version that is currently stomping around in the DC 52 Earth 2 series.

@cash_gorman: I understand what you're saying, but I think this boils down to something in your last sentence. What is a "minimum of fidelity"?
There's just no set line or magic formula for deciding when you've gone too far. Some fans will say changing anything at all is being untrue to the source, others will say that any changes are acceptable as long as you're "true to the spirit", and a lot of fans fall somewhere between. And of course this plays out individually in every reference and every character AND as a whole.
The Catch-22 is that even the weakest connection is there for the fans, the supporters of the character(s) and their universe. Most of the audience won't even know a lot of it is there, so it's not being done for them. Meanwhile the fans, a relatively small portion of the audience, will be searching out every hint of a reference to the source material and judging it by their personal standards of adherence. The ones who debate whether each thing has the undefined proper fidelity are the only reason they exist in the first place. It's really a no-win for the creators when the people who argue about whether there should be a new character are the reason there isn't one.
To be clear, I'm not defending the weak connections or blaming the fans. Far from it. I'm just musing on the ironies and difficulties in adaptation. It's much more complicated than a black-and-white "be true or make new" dynamic.

@Cash_gorman - I would agree that their take on Grundy is the sort of thing you were talking about (and note it wasn't one of the examples I sited), but your original statement was rather more sweeping: "almost every name character.."

That was what I was taking issue with.