The End of Doc Savage? (Again)

This month, Bleeding Cool has an interview the Chris Roberson about his latest issue of Doc Savage, wherein there is no mention of him ending his run on the title which was previously reported in another interview with Roberson last month. 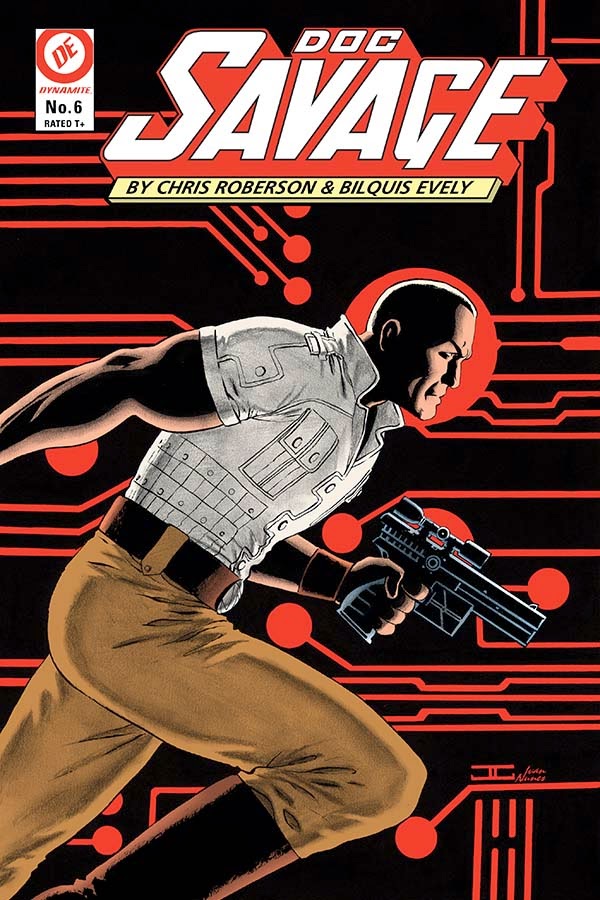 This made me wonder if Dynamite was going to extend the run on this title a bit longer which also struck me as odd considering the current sales:

I picked up the first issue of this run and wasn't that impressed with it. I consider myself a casual fan of the character having read several of the books as a kid and a couple of the newer ones by Will Murray recently.

My biggest complaint about the current Dynamite series is that it places Doc and team mates in the modern era. To me, a large part of the appeal of the character is that the stories take place in the 1930's. What boggles my mind is that this updating Doc Savage approach has been tried several times in the past with little success. I'm not sure what drives writers to go that route. It's like they can't see that readers might find an era or mileau appealing (which again defers reason considering the insane popularity of SteamPunk!)

Now, Dynamite did put out a Doc Savage Annual this year which all takes place in the 1930's, so I tried that out. Still, it seemed to miss the point. Check out the first couple of pages here and tell me what you think: 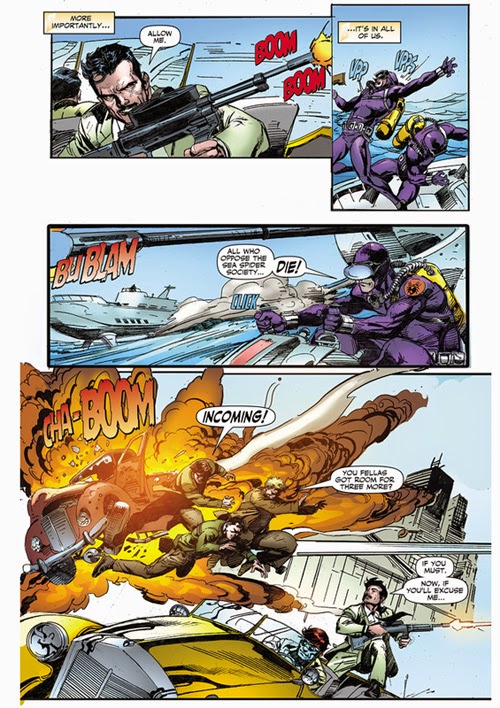 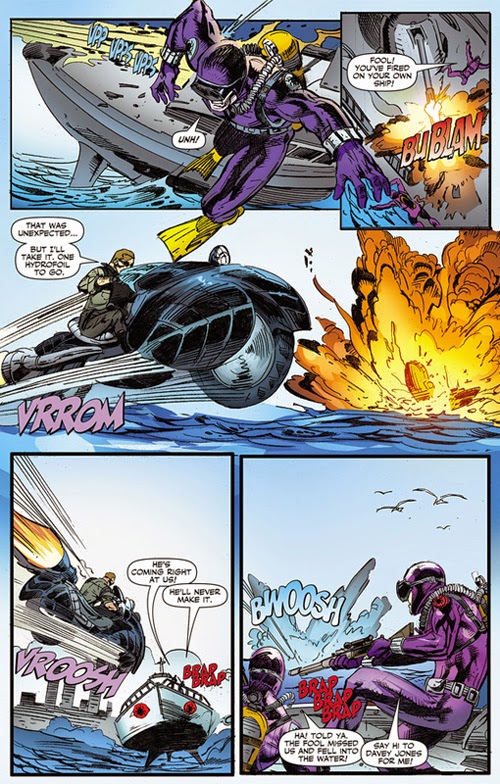 That's the initial scene you see when opening the comic. Scuba Gear, Hydrofoils, Jet Skis...It's doesn't do much to set the 1930's tone does it? The art here could just as easily been from a Nightwing comic.

I don't know. Maybe I'm being too nit picky on this. Did anyone else try this series an like it?

I think they certainly believe period pieces don't do as well. Like you insinuate, I don't think we have enough evidence to judge.

I'm totally with you on that page looking modern too. Some of it is what the writer is asking the artist to draw, but the rest is the artist not conveying the period.

I think updating is fine, after all many of his comic contemporaries have no trouble fitting in the modern day. And Doc's original time period was early 30s to mid to late 40s with Cold War spy type stories. There's plenty of leeway there. The problem (at least for me) is that half the charm of Doc is his crew. You don't need all of them in every issue, but to replace them or to not try to capture them faithfully (as in DC's last two attempts at the character), you're shooting yourself in the foot. Sort of like DC replacing the Justice League with JL-Detroit.

I think there's plenty to explore in expanding Doc's world. You have his international detective agency, partially staffed by his college "graduates". We could stand to see co-workers and peers and families of his crew. Regular police, government contacts and foils. etc. Plenty opportunities for some world building that doesn't require sacrificing what already works and differentiates him from other heroes.

I've enjoyed the book ... a better treatment that what DC did in my opinion ... but you are correct about it being kind of off due to the modernity ... that is what make me drop The Spider after the first story arc. STILL ... at least material like this does come along to present an alternative to the usual fare from DC and Marvel.

I've only read the first issue, and it was okay. I do think old characters, when done right, can work in a modern setting. For example, Kings Watch and the subsequent Flash Gordon series were good reads. But is it the treatment, or is it just because the characters are old and do not resonate with most of today's audience anymore? I was dismayed that IDW's THUNDER Agents was cancelled. Don't these old character's sell anymore just on the virtue of being... old?

On an aside, the last page you posted shows a peeve of mine when it comes to some letterers. With all the blank space (in the sky) that the artist has left in the last two panels, why the heck did the letterer squeeze the dialogue balloons below, especially in the last panel?

Jim I think I agree with you on the idea of Doc Savage being a period piece. I'm finding that I enjoy the Six Million Dollar Man Season 6 comics for just that reason. It's true to the source right down to the sound effects when he uses his bionics.

If they were doing Steve Austin in the modern era it wouldn't even be the lack of 70's that killed it but having to adhere to the expectations of a comic taking place in the modern era which is that fun is persona non grata. SMDM was a show that usually balanced its gravitas and fun pretty well most of the time.

@Trey - yeah, it's odd, because they don't have a problem with putting out The Shadow as a period book. Thought I seem to recall that Dynamite seems to have several different Shadow books all with their own spin on the character.

@Edward Love - I don't know. I just not sold on a modern version of Doc and the Fearless Five. The Cold War is about as far as I would push it.

@GACN - Oh yeah, don't get me wrong. Dynamite's version was light years ahead of what DC did a few years back.

@Reno - Yep! King's Watch was awesome! I haven't read the Flash Gordon series, but I'll check it out on your recommendation.

And that's interesting about the word balloons. Now that I look at it, I see exactly what you mean!

@MattComix - I've not been picking up the SMDM Season 6, but I'll check it out. Your mini-review of it here makes it sound like the sort of thing I would really dig.

@Jim - See, and I didn't like King's Watch as it had the same problems as Dynamite's Masks, only better production team. It turns out to be a stealth reboot of Flash Gordon contradicting not only Raymond character but also the previous Dynamite version, it's not really a team-up of the King's Features characters as only Mandrake could reasonably be the same character, a formerly heroic character is on the side of the bad guys, and we have the added jobbing of Mandrake's villain to be second-rate to Ming. Once it was obviously a reboot of Flash Gordon, it even pre-ordained much of the ending.

I just think if I can accept other Golden-Age and Silver-Age heroes as modern day heroes, I shouldn't rule out that Doc couldn't work either. It's been the execution that has turned me off, not the general idea. Just as Dynamite's Spider (and the Black Bat) suffered from changing things that didn't need changing and altering the dynamics of the various relationships and with photo-realistic art that appeared mostly posed and lifeless on the page. A lot of comic creators seem to think they work in Hollywood and they cannot actually work on a project without changing it wholesale.

I read the first issue and found it pretty good, but I had decided to wait for the trade.

That's what I've been doing in the last 6 months with all my Dynamite stuff.

@Edward Love - I can see what you are talking about with King's Watch. I guess what I liked about it was that compared to a lot of other Dynamite titles, the storyline felt more polished. That it was a Flash Gordon reboot sort of escaped me because I didn't read the other Flash Gordon series they put out.

Which brings up another point about Dynamite - they seemed to do that a bit: reboot or retell origin stories with other creators at the helm. They did that with the Shadow.

And your point about accepting other Silver Age/Golden Age characters that have been modernized works to a point - I think the difference between accepting, for instance, Black Terror or Jay Garrick Flash in modern times is that I never had any real attachment to the original Golden Age stories they appeared in. With Doc Savage, his entire publishing history (in the books) has been as a period piece, so that's part of my definition of the character. To me, part of the charm of those stories is revisiting that time period.

@Diallo - that's probably a better way to read the series instead of reading it bit by bit each month.