Today, Caine returns with another High Rez Review - this one of the new Nightwing!
LAST ISSUE.....
It all started on November 4th 2008.  All of the major comic book news blogs reported the following:

Robin, Nightwing, Birds of Prey to End in February

"While fans are still up in the air about whether or not Batman will actually die at the end of Grant Morrison’s “Batman: R.I.P.” arc, DC has confirmed three casualties for Newsarama.
According to the publisher, the February-shipping issues of Robin, Nightwing and Birds of Prey will be the final issues of the respective series.
As well as being the final issues, Robin #183, Nightwing #153 and Birds of Prey #127 will end eras for Batman-related titles, as each stretches back at least nine years." ~Newsarama 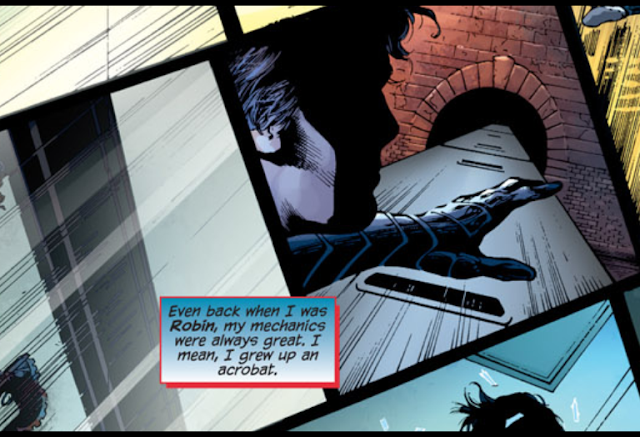 That means we went 31 months without a Nightwing comic (and BoP as well for that matter) but no more.  Dick Grayson is back in a domino mask instead of a cape and cowl.

I have to admit I was most nervous about this particular title in regards to the DCnU relaunch.  As I stated last week it seems, even to industry pros, that execution varies greatly within each title but I'm happy to report that Nightwing's first issue steps up to the trapeze and lets it fly right out of the gate. 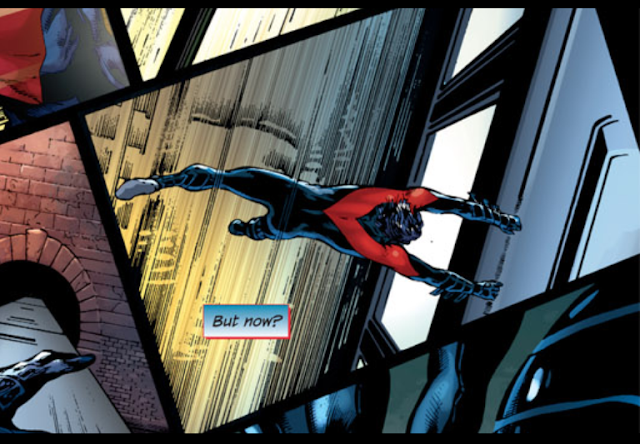 Michael Powell, a twitter follower of mine may have perfectly summed up Nightwing #1 in less than 140 characters on twitter the other night while I was writing this:

"I haven't read an issue of Nightwing in...ever. This was a great introductory issue."~@Mpowelljr

That's the point isn't it?  Attract a new fan base while hopefully keeping the old one?  Well guess what, they succeeded.  Kyle Higgins has crafted a great new backstory that encompasses both Dick as Batman as well as being Nightwing and Robin before that (the only thing not mentioned yet is the Titans and Starfire). 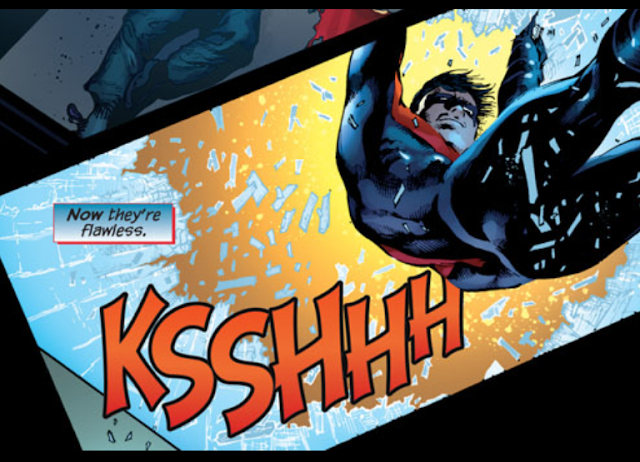 Like Barbara Gordon Dick has been de-aged although it's not quite as apparent as Barbara.  He's being drawn younger, like maybe 22 or 23, but he has his own loft apartment and just finished a year as Batman (as well as filling in for Bruce Wayne in the corporate world) so in my opinion he seems a bit older still than Barbara over in the Batgirl book.

HIGH RES COMIC REVIEW...
Nightwing #1 starts out strong and never lets up.  Dick is on patrol when the book opens (the climax of the first scene taking place just after all the panels I've used in this post) and the reader is filled in on the backstory through narration as Dick makes his way through Gotham city as Nightwing once again (for probably the 10th or 12th time now so he's in the groove once again) after a year break filling in for his mentor. 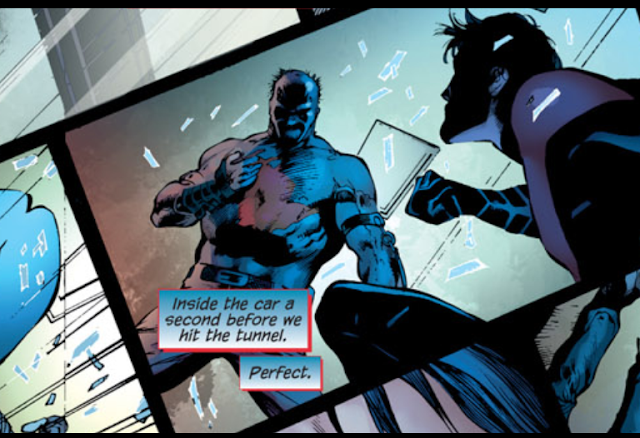 Eddy Barrows and the rest of the art team are doing a fantastic job.  With clean lines and dynamic colors they are using Nightwing's new color scheme to the fullest while never forgetting they are crafting one half of a visual story so narration boxes and word bubbles have been placed with care - all pointing to a well designed set of pages.

Both Kyle and Eddy are big fans of Nightwing, it shows in their work and the inclusion of little details.  In the story it's revealed that Dick wants to live on the wrong side of the tracks in Gotham, not in a billion dollar estate on the outskirts of town.  He has better access this way and he can get a glimpse of the neighborhood he's trying to save.  This is one way he and Bruce differ.

In the art Eddy shows us that there is much more to Dick's new Nightwing suit than simply looking aerodynamically cool.  The ridged or ringed lines in his gauntlets and boots aren't just for looks they are pouches like on a utility belt.  In Eddy's case the artwork is so subtle you may miss it but it's there.

FINAL THOUGHTS...
This book will appeal to both old school Nightwing fans as well as Dick Grayson Batman fans.  Kyle's Dick Grayson is who he is because he did do a year as Batman.  You get the feeling from the story that Dick wasn't Nightwing for all that long before he needed to step up and take over for Batman.  Going up against Gotham's worst of the worst puts you in tip top shape and Nightwing is going to be glad he's in tip top shape as he gets back in touch with Haley's circus since the death of his parents.  You see Gotham has a way of twisting what you love against you....

The intelligence-insulting illusion of change has never been more insulting than right now at Warner comics.

To have the original Robin finally undergo apotheosis into Batman, and then to reduce it to a summer job and reset it, shows the fait accompli of intellectual bankruptcy at what is surely now starkly shown to be nothing more than a copyright farm.

There are things I like about Eddy Barrows art but I have yet to enjoy any project his art has been a part of. This one still left me just as cold as the rest of Didio 52 has thus far.

Though I will say that the idea of Dick Grayson visiting the old circus after all those years is actually an interesting story idea by itself.

It was good to see Dick in the new Nightwing costume. I grew up with Nightwing and this issue felt like going home again!

@Flying Tiger
There are fans who would argue that Dick should have never been put into a position to take over as Batman. He's his own man and his destiny isn't the same as Bruce's. I for one am glad he's back as Nightwing and swinging along his own path. :) Thanks for reading and commenting.

@MattComix
Wow, did you read Hawk & Dove? Read H&D and then re-read Nightwing cause I'd call this is 100% improvement. :)
Thanks for commenting.

@Joyce
I feel the exact same way. Growing up by spending summers at Wayne manner with a stop over at Titans Tower :)
Thanks for Commenting.

@Caine. If "at least it's better than Liefeld" is as good as it gets for the new 52, that's kinda sad.

I did notread/buy a Nightwing comics since MacDaniels was replaced by Greg Land (wiat a minute... I think I did... I got the year one issues by.... McDaniels)... but I was glad to see Dick back in his Nightwing persona.

So having Nightwing back is a good thing.

I liked that first issue... and am curious to see where it goes from here.

Having Dick as Batman makes more sense then having Azrael as Batman.

Yes Dick is his own man but at the same time Bruce was an adoptive father and mentor to him. Plus he knows what Batman means to Gotham.

I guess what I'm saying is that if you're gonna go that route and the torch is passed at all Dick should be the one. Unless you're going the Batman Beyond route where they have some falling out that is never reconciled.