Today, I present another one of Pierre's versions of a Classic Golden Age character - this time it's The Ray, from Smash Comics. 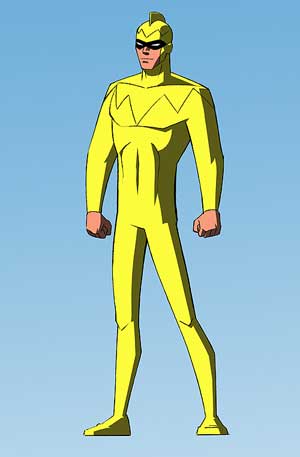 The first Ray was a Quality Comics character who was one of those purchased by DC Comics. He was later retconned as a member of the Freedom Fighters. His son, the second Ray, and Stan Silver, the third, were created by DC.

[ download Smash 31 ]
The Ray was Happy Terrill, who gained energy-based super-powers as a result of having been exposed to lightning and sunlight at the same time while ballooning. And as wacky as that origin is, all of the origins new versions of the character seem worse...

[ download Smash 36 ]
In thinking about the Public Domain aspect of the Quality Characters, I keep wondering why the Dynamite series Superpowers Project didn't include any of them. I'm not really a fan of the current DC revival of the characters - Uncle Sam and the Freedom Fighters. I think it would be interesting to see what the gang at Dynamite could do with the characters.
Have a great day!
- Jim
Posted by Jim Shelley at 6:44 AM