Check out the Horror Lovers

Often, I find myself trapped by the comics-centric nature of this blog, as it prevents me from delving into subjects I would like to write about (Scooby Doo, The Classic Universal Monsters, The Marx Brothers, ect...) There usually isn't much of an opportunity for me to give even a shout out to such topics here.

So imagine how happy I was when I discovered The Horror Lovers on Kickstarter: 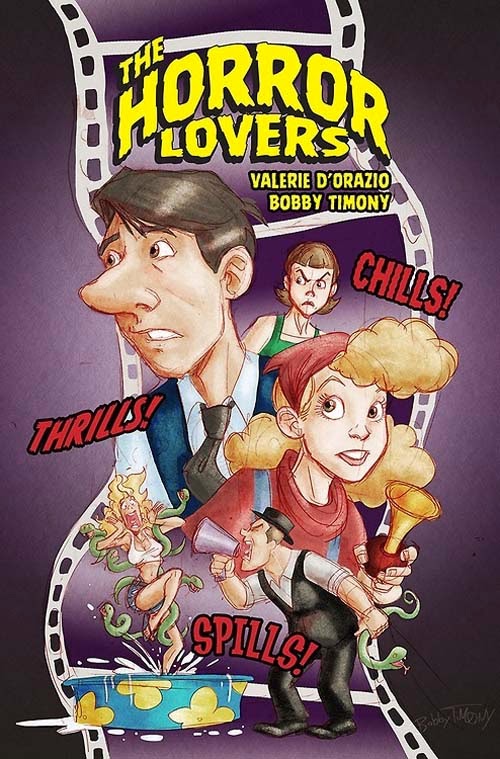 The Horror Lovers is the story of the humorous shenanigans at a small low budget horror studio (Bloody Hell Studios) during the golden age of film. The preview pages present a fun blend of 1950's Mad Magazine zaniness and Marx Brothers humor. 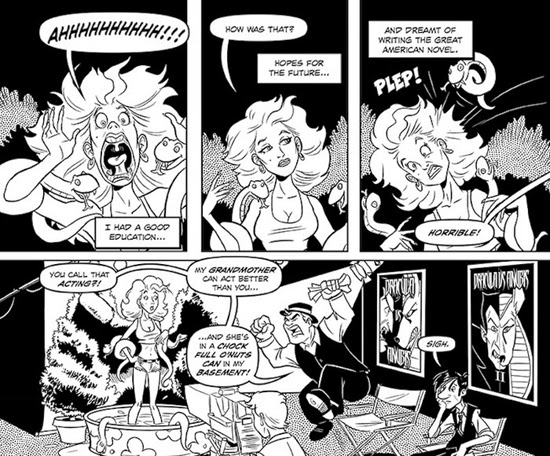 The creators behind the comic are two talented professionals who are perfect for this project: Artist Bobby Timony (who I discovered via The Night Owls on Zuda and whose Detectobot for monkeybrain I am currently enjoying) and written by Valerie D'Orazio (whose Punisher Max: Butterfly story for Marvel proved she had a deft ear for the human condition and dark humor.)

Terry always dreamt of writing The Great American Novel...but instead found himself hacking out horror scripts for the ultra low-budget BLOODY HELL STUDIOS alongside the crude-but-determined owner/director WALTER BURNS...

But one day Terry's fiancée DEBBIE gives him an ultimatum: quit wasting his time at the movie studio, or risk everyone finding out about his DEEPEST, DARKEST SECRET!

But when somebody ends up dead at the bottom of a giant cake, EVERYONE'S a suspect!
----------------------
If you are a fan of such whimsical stories with a touch of nostalgia, I strongly encourage you to check out the 8 Page Preview at HorrorLoversComic.com

If you like what you see, support the project on Kickstarter.com