Comixology to remove in App purchasing on iOS devices

Yesterday Bleeding Cool reported that Comixology, now owned by Amazon, would be removing the ability to buy comics via in app purchasing on iOS devices.  From now on, if you own an iPad or iPhone and wish to read new comics on such devices, you will have to buy them through the Comixology Web Store, then download the comics to your device. 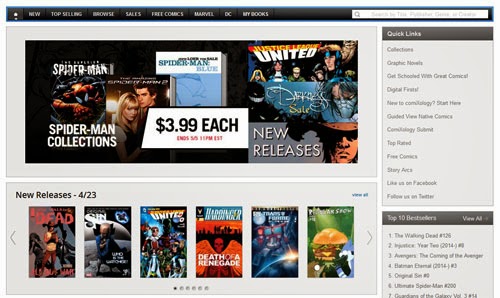 As digital inconveniences go, this is a minor one, but I can still see some people getting miffed about it. (I don't own any Apple devices, so I'd be interested in hearing from someone who anyone who does as to what they think about this news.)

While I didn't foresee this, I guess it does make some monetary sense for Amazon as this will allow them to sell to people with those devices without having to give Apple their 30% cut. This shows Amazon is definitely plays the game by their own rules which makes me wonder what else they might consider changing.

Here are some predictions:
One also has to ask if they will be any response from Apple on this? On one hand, Apple is so big and profitable at this point, I doubt the 30% revenue they will lose from Comixology will be notice (though it did regularly rank in the top 10 apps every year...) On the flipside, some people at Apple might see this as opening the door for more companies to do this. What is to keep other companies from offering a free version of their app in the iTunes store and then direct people to a website for a key/serial number to unlock a premium version?

Another question I have is how has Comixology become the only player in this sphere so quickly? Maybe they won't be for long. From what I've heard Marvel/Disney may have  something coming up.

Remember, there is a synergy between Disney/Apple that would allow them to build their own comic reading app quite easily. And the 30% profit Apple gets from each purchase doesn't really hurt Disney like it would people who aren't partnered with Apple. (At some point, you hit a sort of funny money area when you are talking about money going to a partner company.)

With that in mind, the big question is: Could we see a time when Marvel comics become exclusive to Apple devices?

I read some comixology comics on my iPad. I just installed the new app and realized last night that I couldn't buy comics through the app. I don't buy too many comics, but I still find it a little annoying. I' imagine people who buy several comics a week, this would be a bigger pain. Having to log into two places to buy and read a book will be tiresome. Maybe the app will die out and everyone will just use the web front end.

@Walter - Thank you for the iPad view! Your sentiments echo what a coworker said to me yesterday. And while I've heard that Comixology has developed work arounds (which I was able to test on my Android device) I think this is one of those wake up moments for the industry where we realize getting complacent about a system isn't always safe.