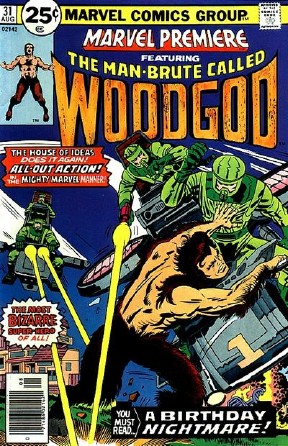 Note from Jim - I'd like to introduce a new feature today to the FBU called Bronze Age Spotlight written by FBU friend Trey Causey. Trey has some really interesting insights into the Bronze Age that I thought you might enjoy, so he has graciously agreed to share them with us. I hope you enjoy it!

Jim Shelley is a Woodgod fanatic, for reasons which will likely forever be obscure. So when Jim asked me to scribble something down periodically on characters of the Bronze Age to feed the hungry maw that is his blog --well, Woodgod would have to come first.

Let's get the basic facts. The man-brute (as he is called on the cover) known as Woodgod first appears in Marvel Premiere #31 in 1976--a title which also featured Alice Cooper (#50), so we may fairly call it eclectic.

Woodgod is the creation of Bill Mantlo who gave us a lot of pure, uncut Bronze Age (and near post-Bronze Age) product--The Micronauts, Rom, Cloak & Dagger, Jack of Hearts, and Rocket Racoon. I defy any real comics fan to NOT find something that hits their undiluted comics sweetspot among Manto's ouevre. Can't be done. 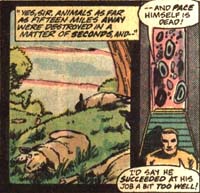 Now Woodgod also springs from the able hand of Kieth Giffen, who has given us a lot of good comics as well, but mostly post-Bronze Age. Woodgod, though, has that telltale Mantlo glow.

So Woodgod is a gentically engineered supercreature made in New Mexico. Frankensteinian in origin, and cloven-hooved to boot, he sends townsfolk into a violent frenzy of ignorance (as man-made creatures have a habit of doing) and they accidentally release some nerve gas that kills his creators--and themselves.

After fighting the army with the Hulk and Spider-Man, Woodgod eventually winds up in the Colorado Rockies. He begins practicing self-taught genetic engineering (he's a quick study) and creates some other half-animals to frolic with called the Changelings. 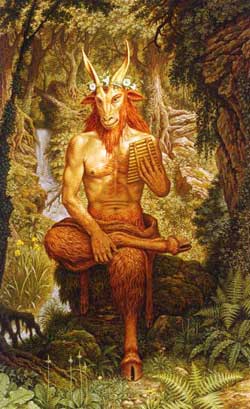 Where'd Mantlo get the inspiration for this? Well, the most obvious source is mythology since Woodgod resembles a satyr, or the Greek god Pan. His name even makes that explicit since nothing else is particularly godlike about him. Pan is traditionally the "god of wild places", which is almost a recapitulation of Woodgod's name.

The leadership of the changelings (the name traditionally given to fairies left to replace stolen children) ties in with this theme as well.

Pan is typically associated with the Horned Man or Horned God, one of the putative ancient deities of the pan-European witchcraft cult hypothesized by Margaret Murray's Witchcraft in Western Europe (1921)--which is really interesting if one doesn't let pesky things like historical fact get in the way of wild-eyed speculation, which Murray certainly didn't.

In any case, Cernunnos, fertility god of the continental Celts, is also horned. It's a common motif, whatever its origin.

The real meat of Woodgod's origin, though--genetic engineering and all that--seems weird for a character that's a shoutout to Greek myth, when Hercules and Venus are running around the Marvel Universe. No, I think the biggest inspiration must have been the Goatman. 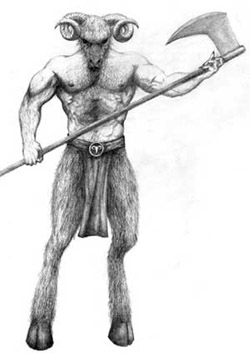 The "Goatman" is a legend or cryptid (take your pick) originally reported in Maryland, but eventually sighted in a lot of places, some even in Colorado.

The Goatman was first reported in 1957, but the story really takes off in the seventies. Certainly by this point, if not before, the legend is of the typical "lover's lane" variety. You've heard 'em, I'm sure--teens making out are menanced by a killer or monster of some sort.

In this case, a satyr with an axe--which always struck me as an odd detail--why the axe?

Anyway, besides the axe, the other interesting tidbit about Goatman is that he comes with an honest-to-goodness origin story! Supposedly, the creature is the product of secret government genetic experiments--either as unholy creation (Frakenstein again) or tragic accident (Bruce Banner-style). See how the hoofprints begin to bear a resemblance to our man-brute hero?

Before this trail emerges from the woods, let's try to put these divergent paths together. We've got ancient gods with cloven hooves that represent the wilderness--and procreation. 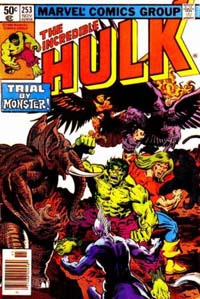 The Goatman and Woodgod are tied to the wilderness, and procreation as well, through their links to genetic engineering. The Goatman, unlike his hooved brethen, is a double cautionary tale--not only is he made by man playing god, but he menaces teens with procreation on their minds. He's The Horned God inverted.

How about Woodgod? He proves his fertility (and his ancient connections) by learning the genetic arts and birthing children of his own, the Changelings in the pages of the Hulk.

Woodgod expressly wishes his changelings to become better than humanity--symbolically replacing them like their namesake fairies literally replace human infants.

You know, Woodgod's progenitor Pan was often accompanied by Priapus, a minor god with a permanent erection...I wonder how Bill Mantlo would've tackled that within the Comics Code?

When I first saw Woodgod, what made an even bigger impression than his appearance or mythological roots was the whole Andromeda Strain-inspired setting and my puzzlement over how Mantlo and Giffen thought it could form the basis of an ongoing series. This question still fascinates me.

I must also confess I bought that issue mainly because of the Kirby cover...