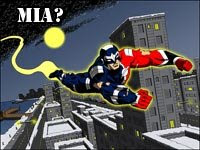 So if you are a loyal Flashback Universe fan who has been patiently waiting for the next FBU comic since we released The Paladin, you're probably wonder what the hell is up with us not releasing any new comics lately?
Well, what has happened is that for several reasons we had a couple of artistic hiccups that have slowed us down.

One you know about if you've been reading this blog, and that's Pierre's long engagement working on the Arthur cartoon. That took a good bit of his time over the past year. However he has been able to work on a few Flashback related comics during this time.

Aside from Arthur, Pierre was also working on our Zuda submission.

Pierre is also working is Saturn Knight: The Knight Before Christmas, which we hope to have ready for you by this Christmas. Written by Chris Sims, this story features the a ton of Flashback Universe characters and I expect everyone to really get a kick out of it! Check out this preview page from this story...

Chris Sims actually is responsible for two more upcoming Flashback Universe comics. The other is the amazing Flashback Two-In-One featuring WildCard and The Creature with art by Gentleman Jerry Hinds. It's been a long time coming, but I think everyone will like the work Jerry is doing on this comic. Check out these two pages...

Chris is also working on a Kondorr comic with a new artist who goes by the moniker of Cornfed Cannibal (long story...) Check out these pages from Kondorr - Once Mighty!

And last but not least, we are very near completion of a comic featuring Amanita and Prometheus written by Chad Bowers and illustrated by Chris Nye and Don Jackson. Check out this great cover by Don and colors by Liezl Buenaventura and interior page by Chris.

So look for some great Bronze Age excitement to be coming from us very soon!
Posted by Jim Shelley at 6:56 PM