Who is Seth Sherwood? 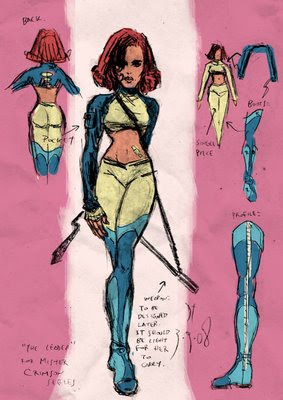 I introduced readers of this blog to Diego Tripodi about a year ago when I first interviewed many of the creators involved in Flashback Universe, but he's only half of the team on Mister Crimson. Today, I'd like to take this opportunity to introduce everyone to Seth Sherwood, writer and co-creator of Mister Crimson.

Who is Seth Sherwood?

A person that gets very little sleep. I live in Los Angeles. I have a wife and 3 year old son. I have an undergraduate degree in design/photography and a graduate degree in creative writing. I spend my day doing motion graphics, print design and video editing for a media outlet; my nights writing screenplays, comic scripts and novels; and my weekends being an amateur filmmaker.

Why TankLab? (Seth's alias on Zuda)

A million years ago I registered the domain name. It was a play on words of sorts-- a combination of Think Tank and Lab. My original intent was to have a website where I could try out various artistic ideas. I was going to invite friends to participate, and create an online space to experiment with art, design, programming and narrative. But it never happened. When I needed work, it was a resume/portfolio site, but I'd often yank it down as soon as said work was found. Now, it's just a temp page, but in reality holds various files I need to keep online. Videos, script pages, etc. Plus it's my email server. Just to make it easier on my limited memory, most of my online accounts on blogs, message boards and communities are some derivation of "tanklab."

Who are some of your favorite writers - both in comics and not in comics?

For comics, I follow the early Vertigo guys. Gaimen, Morrison, Ennis... Warren Ellis especially. I love his sci-fi approach to pretty much every other genre. For TV, I'd have to give credit to Mathew Weiner and his staff for Mad Men. It's probably the best written TV I've ever seen. For films, I'd have to say Paul Schrader for really pushing the envelope of darkness in mainstream cinema. He wasn't the only one doing it, but he did it consistently for several films. When it comes to books I'm a big fan of William Gibson and Jonathan Letham. Both of them started in sci-fi, but had such a mastery of language that they transcended the genre. 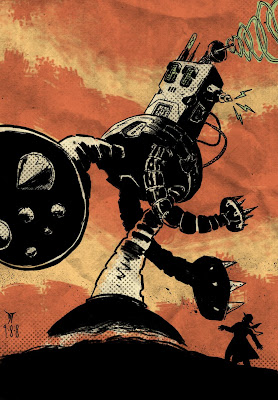 What was the inspiration for Mister Crimson?

Diego's sketchbook! Diego is my brand of crazy. I look at his stuff-- the angels, the demons, the stinky clowns, the naked women, the talking skulls-- It's all so, so much of what i see in my head! He had a sketch of a guy in goggles that really stuck with me. I can't remember the context of it, but I knew he had been wanting to draw some pulp era style heroes.


That idea, combined with my nature to drift toward sci-fi, made me think of a scenario where a pulp hero might be in a futuristic world. It wasn't long before The Shadow, The Spectre, The Phantom, Blade Runner, Metropolis and what not started to pop into our heads and give us ideas.

How did you meet Diego, and how long have you been working with him?

I was looking for an artist to collaborate with via a digital webbing ad. The idea I had cooking was about this Jason/Freddy/Michael Meyers sort of brute. Some immortal thug that goes on killing, but is now trying to make amends for it. He needed a mask, of course, and I have an obsession with luchadores and their head gear. When Diego answered the ad, his sample pages were of a luchadore, in a muscle car, in the desert with zombies in the distance. It was a perfect match. That was a couple years ago and we've worked on various projects since.

Mister Crimson was your second project to successfully be picked for the Zuda contest (the first was Pieces of Eve ) - what do you think of the Zuda process?

Zuda is awesome and annoying at the same time. It's a great way to get some exposure and find fans of your work. Diego and I had gone through a few rejections and were kind of giving up. The feedback to Eden was awesome and really energized us. it was great to know people liked what we were doing. But at the same time, your standing depend on votes-- which is more based on how many on-line friends you have as opposed to your talent. That's not to say any of the winners on Zuda lack talent, but the votes and the comments always seem a little skewed. Mainly, as I said, it's great for exposure.

Do you have any tips for other creators looking to enter the Zuda contest?

Yes. If you're George Lucas, for example, don't give them your Star Wars. Give them your Howard the Duck, or Tucker. You're trading exposure for licensing rights. This isn't a secret, their contracts are very upfront-- but just keep in mind your participation is up to them. It was just announced several Zuda comics would be going to the Cartoon Network. Some of those creators may be involved, others not. It's up to Zuda. If you have a pet project, I don't recommend signing it out of your own hands. 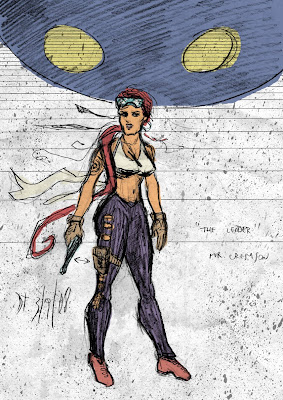 What do you think is future of comics?

I don't think it is straight webcomics OR the current solicit to print to retail model to be honest. A lot of people just don't like reading on the screen, even if that is the future. At the same time though, as with music and film, the ease of acquiring comics online is killing the old standard distribution and retail methods. I see a future where comic companies offer some of a title as a webcomic, with an option to buy a download or print-on-demand version.


As printing technology gets cheaper and better, the print run of a book will be a non-issue to the pros. We're not that far off from a double sided color laser printer being in people's homes. A downloadable, print-ready PDF with the comic in printer spreads could be bought cheap, printed for cheaper, and made at home. Comics on demand.

Personally, I love going to my shop and browsing. I love the smell of ink on a new book. I love a story that's formatted for an online read in the middle of my workday. These things are great, but I think time and technology will supersede them both.

What comics/web comics do you currently enjoy?

I go through a lot of phases. As a kid I was a DC fan. As a teenager it was Marvel. In my college days, it was all indy stuff like Love & Rockets and 8 Ball along with the early Vertigo stuff. These days I'm split. I'm loving Vertigo's renaissance of going back to off-beat dark stuff. For superheroes, I'm a dedicated X-Men fan. Image puts out a great variety of genres that are fun. Walking Dead and Invincible of course-- and anything Jimmy V puts out via Shadowline.

Got a favorite underappreciated comic story/arc?

I don't know if it is under appreciated, but I want to say Desolation Jones. Despite being a Wildstorm book it never had a huge amount of lauding it deserves. It's pretty much my favorite work in all of comicdom. Great story telling, great art-- some funny, some scary, some ugly, some pretty. A little sci-fi, a little noir-- it's really perfect in my eyes, even with its brutal ending.

Decompression is getting tired-- unless it is balanced with periods of action. EVENT comics are tiring. DC I can't even follow with their Crises and Countdowns. I have no clue what is going on. Their books are almost indecipherable. I love what Marvel is doing, but they need to stop hopping from event to event and let their stories breath a little. I miss done-in-ones. Crimson is sort of my response to that-- it's very old school with it's narrative. Staccato and fast paced.

Got a site or other project you would like to mention?

Not YET. I've got some things cooking that are potentially big, but I'm superstitious and don't want to mention them until I've signed papers and gotten paid!

Thank you Seth!
Posted by Jim Shelley at 4:46 PM